After bouncing about in a couple of good Blu-ray editions, Carl Franklin’s superior film adaptation of the great Walter Mosley novel makes the jump to 4K. Denzel Washington’s star quality and acting prowess shine in the smart production, with Tak Fujimoto cinematography that put the color back into ’90s filmmaking. There’s plenty to enjoy in this hard/soft-boiled tale, starting with the great music. Everybody’s good and Don Cheadle’s loose-cannon henchman ‘Mouse’ is terrific. It’s one of Washington’s best pictures, and should have initiated an entire franchise of Walter Mosley / Easy Rawlins detective adventures. Was it bad timing or what — how could a movie this good not catch on?  Carl Franklin was cheated, Easy Rawlins was cheated and WE were cheated: the 1995 feature film Devil in a Blue Dress, adapted from the first of Walter Mosley’s detective novels, should have been the first chapter in an ongoing series. Denzel Washington is terrific in an excellent rendering of Los Angeles in 1948, where South Central is the home neighborhood and blacks are discouraged from drifting into the West Side. Everything clicks. Director Franklin brings the taste and talent that creates a feeling of ‘being there’ without overstating the period trimmings.

The show was executive-produced by the makers of The Silence of the Lambs. Like the bigger success Philadelphia it offers star Denzel Washington a worthy leading role, the kind that black actors seldom received. It begins by inviting the audience into the black section of postwar L.A., nighttime streets crowded with shiny cars and well-dressed pedestrians. Dance clubs and jazz haunts abound, and illegal gambling can be found in an upstairs room over a drugstore. It’s the stomping ground of both gangsters and wage-earning locals, and Easy Rawlins calls it home. 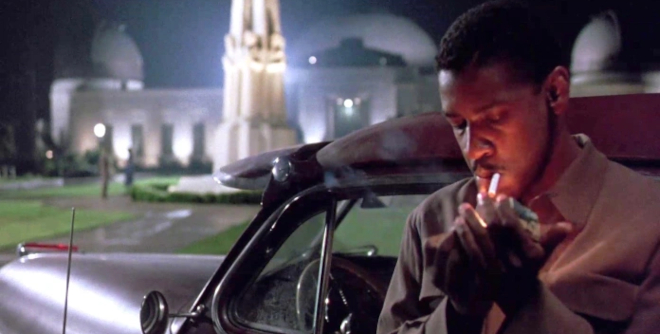 Walter Moseley’s story is smart and not overly complicated. It’s a classic detective hero genre reboot, with an aware (but not angry) attitude regarding race relations. Laid-off aircraft worker Ezekiel ‘Easy’ Rawlins wants to keep his snug little house in the Adams district, and so takes on a shady ‘errand’ for a white gangster, DeWitt Albright (Tom Sizemore). His assignment is to locate Daphne Monet (Jennifer Beals), an elusive white woman known to prefer black company; Easy has access to the black clubs where Albright wouldn’t be welcome. It’s soon discovered that Daphne is mixed up with a pair of powerful competitors for political office: the thuggish Matthew Terrell (Maury Chaykin) and the bookish Todd Carter (Terry Kinney). Worse, Daphne may possess some illicit photographs that various gangsters are willing to kill to recover.

Easy Rawlins knows he may be getting into trouble, but he doesn’t expect that his initial inquiries will get a close ladyfriend killed. Easy insists that he doesn’t want trouble and balks at doing anything more for DeWitt Albright. But the gangster isn’t listening:

“When you step out of your door in the morning, you’re already in trouble. The only question is, are you on top of that trouble or not?”

The malevolent DeWitt schemes to frame him for other murders as well. But Easy is not without resources of his own. He sends to Texas for his own strong-arm man — the unpredictable but undeniably effective Mouse Alexander (Don Cheadle).

Writer-director Carl Franklin was an apt choice to bring Walter Mosley to the screen. The former actor (Five on the Black Hand Side) first came to our attention with his direction of 1992’s notable neo-noir One False Move, which yielded a strong character conflict with an interracial relationship between a small town police chief and a black suspect (Bill Paxton and Cynda Williams). Franklin’s Devil in a Blue Dress doesn’t just put a coat of black paint on a standard detective tale. Neither is it anything like the old blaxploitation subgenre, where the main joke often boiled down to putting whitey in his place. If anything Easy Rawlins is a more cautious character than in Mosley’s books. Denzel Washington has Easy tread lightly when rousted by the police. Blacks in 1948 didn’t go strolling on the Santa Monica Pier, and Easy’s not there five minutes before some teen punks start trouble. No attitude or heroics ensue — Easy knows better than to assert his rights in a situation where he can’t win. As it turns out, he’s saved by an even scarier white gangster, played to perfection by Tom Sizemore.

The relatively lavish production plants us firmly in a bygone era. The cars are big and shiny, most everybody dresses up to leave the house, and the cops feel entitled to rough up the black population whenever they please. South Central is in some ways a wide-open district. If the action is black on black, Easy can storm into a bar and remove a man at gunpoint, and get away with it.

Easy goes through a number of familiar private dick moves. He holds his own with the rich and powerful and is smooth when he chats up Jennifer Beals’ mystery woman. He doesn’t intimidate people but insists on fair dealings. He keeps a tally of those that wrong him. Is his bartender friend Joppy (Mel Winkler) on his side, or is he helping Albright behind the scenes?  Why did Coretta James (Lisa Nicole Carson) not trust Easy with Daphne Monet’s secrets?   And who is the screwy guy Richard McGee (Scott Lincoln), who shows up only long enough to ensnare Easy with another potential murder charge?

Never afforded much praise as an actress, Jennifer Beals is an impressive, credible femme mystérieuse. Her Daphne Monet doesn’t expect Easy to believe her when she flashes her big dark eyes. Interestingly, Mosley and Franklin give her a background as a poor girl trying for respectability, only for her mixed race and some twisted city politics to get in the way. She’s like a luckier version of the tragic Elizabeth Short — her politician lover’s heart is true, but so is his inability to accept Daphne’s heritage.

Franklin energizes an interesting mix of new and underused actors. Albert Hall (Chief Phillips in Apocalypse Now) is Easy’s somewhat mousy neighbor Odell, a nice guy who can be depended up on for good company over a cold beer. Jernard Burks is Dupree Brouchard, an easygoing former co-worker from the aircraft plant. As Dupree’s girlfriend Coretta — and also a confidante of the elusive Daphne Monet — Lisa Nicole Carson is charm personified. Coretta coaxes Easy into sleeping with her via a series of irresistibly casual steps. In his commentary, director Franklin says that he invented the character of the woodcutter (Barry Shabaka Henley), a benign nutcase in Easy’s neighborhood. Sort of a mad gardener, Brouchard goes about chopping down unguarded trees. Easy is constantly chasing him off.

The most arresting character by far is Don Cheadle’s easygoing yet completely unreasonable Mouse Alexander. Mouse’s relationship with Easy is hilarious. He’s just what Easy needs in his corner when trouble comes — fanatically loyal and with a knack for showing up just when he’s needed. On the downside, Mouse is also a borderline psychotic, a hair-trigger loose cannon who can’t be trusted to keep a lid on the violence. He just can’t keep himself from shooting people:

How many movies have we seen that show black people living in a stable middle class neighborhood?  In the midst of all the genre intrigues is a vision of a real place where people live normal lawn-and-driveway lives. The enormous volume of war industry work in Los Angeles brought an exodus of African Americans to town, and the defense plants offered solid jobs and the ability for many to buy homes of their own — in certain neighborhoods. Easy and some of his friends are transpanted Texans, and now that the war’s over some are moving back home. Devil in a Blue Dress stresses the fact that Easy Rawlins’ main ambition is to remain a happy bourgeois homeowner. He derives pleasure from the respect of his neighbors.

This is a quality show, well-acted, exceptionally good looking and frequently very funny. It is a friggin’ crime that the execs behind this movie didn’t see the winning franchise they had on their hands, with a sizeable crossover audience. In the last scene Easy tells Odell that yes, he thinks he’ll become a private detective full time. Denzel Washington ought to have returned every year in a new Walter Mosley / Easy Rawlins crime adventure.

The Criterion Collection’s 4K Ultra HD + Blu-ray of Devil in a Blue Dress 4K gives Carl Franklin’s show a terrific theatrical presence. The color pops from the screen — Tak Fujimoto isn’t afraid of bold hues. The burgundy paint job on Easy’s sedan says 1948 to these eyes; as a small child I remember that we had cars painted that color. Jennifer Beals and Lisa Nicole Carson look especially warm, tactile even. The movie has many very tasteful, beautifully shot night scenes. The atmosphere is rich in Easy’s frame house and Joppy’s Place, with its marble bar. It’s an excellent choice for 4K viewing.

Criterion appoints the show with extras that stand out from previous Blu-ray editions from Twilight Time and Powerhouse Indicator. Repeated are Carl Franklin’s commentary and the lively Noir City talk with Eddie Muller, from Chicago in 1918. Don Cheadle’s audition tape is retained as well.

The new items are attractive indeed. Franklin and Cheadle regroup for a 30-year reunion sit-down. We also get a solid piece from author Walter Mosley, who discusses the book and the movie with writer Angele Locke.

I would hang on to the Twilight Time disc if you have it, as it carries an isolated music track for Elmer Bernstein’s music score.