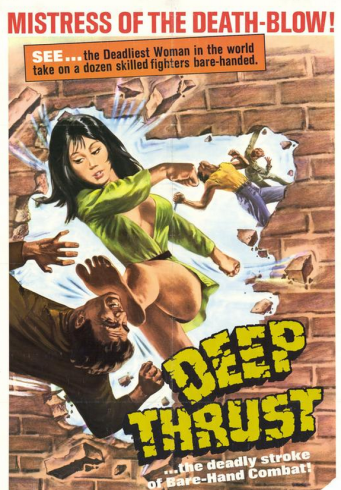 Subtitled THE HAND OF DEATH in ads, to avoid confusion with the very film whose title it imitates, DEEP THRUST is one of the more hastily‑imported Kung Fu epics from Hong Kong and shows it. Nonetheless, it offers enough kicking, chopping and speeded‑up martial arts battling to score in the lower‑class action markets which have been responding to this sort of thing. Bleary picture quality, amateur dubbing, and a soundtrack with all the clarity of a badly‑tuned transistor radio put this Hallmark presentation from AIP on a far lower entertainment level than most of its competitors.

This time, the main bone‑breaker is winsome Angela Mao, who proves at the outset how liberated a woman can be by mopping up a casino with eleven anti‑social males whose knives and hatchets are no match for her flying fists. Angela wants to kill Chang Yi, a nice boy who, in a moment of weakness years before, jilted Angela’s suicide‑prone sister. But before they can fight it out, Angela and Chang team up to wipe out the local Dragon Lady and her minions, who are turning their beloved town into a den of vice.

This accomplished, Angela and Chang square off, but his current girlfriend rushes into the breach with a call for peace and goodwill, only to get clobbered by Angela. Chastened by the sight of the poor girl belching blood, Angela learns there is more to life than Kung Fu—a realization which comes, alas, too late to do anybody much good. Production and direction are at primitive levels that would never be tolerated in domestic product, and the music consists of ill‑rerecorded themes pirated from several recent major releases.

DEEP THRUST is available under its original title, LADY WHIRLWIND via Shout Factory.