Stabbings, scaldings, hideous lacerations from broken glass and even more brutal manglings for our sanguinary delectation! Dario Argento’s smartly directed murder mystery gives us David Hemmings as a jazz man in Rome, studying not photographic blowups but the hidden artwork of a disturbed child. With music by Goblin and striking Techniscope imagery by Luigi Kuveiller. 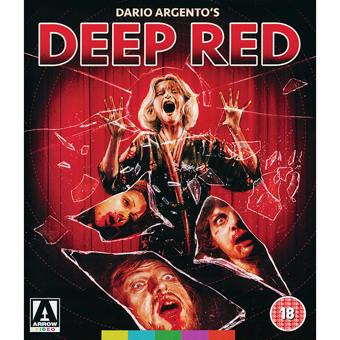 In 1976 the Giallo craze was in full swing in Italy, and the more adventurous American fans were already hip to Dario Argento’s Bird with the Crystal Plumage, even if they had not yet heard of giallo-makers like Lucio Fulci. Not until the advent of home video would Americans get meaningful access to Italian thrillers and horror fantasies. But in 1976 I remember seeing impressive TV spots for Argento’s Deep Red, that promised a regular parade of bloody killings.

Deep Red has the reputation of being one of Argento’s two or three best filmic efforts. It presents his visual talent at a high pitch, the storyline isn’t completely absurd and much of the acting is quite good. Although gruesome killings and bloody gore are still the come-on to fill theaters, Argento’s direction has laudable qualities — he dabbles in sub-Hitchcockian cinematic games without embarrassment. As with much of the best of Italian genre cinema, the cinematography is almost hypnotic, with Luigi Kuveiller’s camera gliding through sumptuous settings that feed the eyes. Contrasted with the visual beauty, the butchery by cleaver, razor blade, and any available household cutting device is fetish-ized to the point where being murdered almost looks pleasant, desirable. The first acknowledged giallo had introduced the notion of a smorgasbord of murders. Instead of a lot of mystery investigation and debate and maybe one scene of violence, why not build everything around the violent ‘good stuff’ and skip some of the storytelling details? Former film critic Argento enlists fancy settings, an architectural eye for compositions and a wicked love of tricky story twists to fashion entertaining murder spectacles.

Profondo Rosso uses spiritualism as a springboard, but the show really falls back on Antonioni’s Blow-Up for its basic premise. While trying to help an inebriated colleague on a street corner, Jazz artist Marcus Daly (David Hemmings) witnesses the gruesome murder of Helga Ulmann (Macha Méril) in an apartment window. He sees the escape of a culprit in a shiny raincoat. Thinking that he’s now marked for death, Marcus teams with the provocative reporter Gianna (Daria Nicolodi), who seems more intent on seducing him than getting a good story. But more murder attempts involve Ulmann’s psychic colleagues and Marcus’s own friends. The clues lead Marcus to theorize that a mad killer is on the loose, and sure enough we see intense visuals of a gloved fiend playing with an odd array of toys, before going out to commit another crime. Surrounded by possible suspects, Marcus doesn’t know where to turn.

Argento starts with a beautifully stylized flashback to a child’s nursery, where a knife killing represented by shadows on a wall, apparently imprints a child for life. Subsequent sequences offer the distraction of dazzling visuals, whether at a psychics’ convention in a large opera house, or in the victim’s apartment with its unusual artwork. Psychic powers are linked with artistic sensitivity, but only visually; the psi talent on view is taken for granted and then forgotten. Argento’s camera aestheticizes everything it touches, whether it is actual artwork or precise trucking shots on objects on a table or feet walking on a polished floor. The visuals emphasize the tactile experience of an ornate painting or ‘touchable’- looking fabric. Thus exposed flesh looks all the more vulnerable. 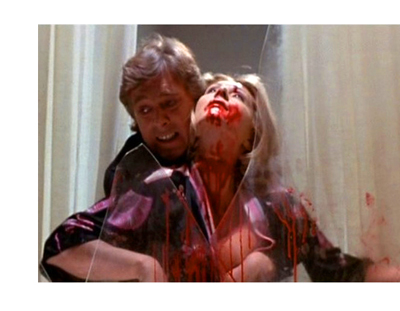 Deep Red doesn’t score points with gratuitous female nudity, but it does single out women for some of the worst physical abuse. In a sequence in a bathroom of polished tile, a struggling woman’s face is forced into a tub of scalding water (a really efficient water heater there, Giuseppe) until her face is one huge blister. Before she dies she’s able to write a note into the steam fog left on a floor tile, just as in Hitchcock’s The Lady Vanishes. Instead of reprinting negatives to find the killer, Hemmings’ Marcus studies some violent crayon drawings by a seemingly disturbed child, and breaks through a wall in a fancy villa to find a secret room. As can be expected, the actual killer is a surprise, even after a violent scene reveals one very convincing suspect.

David Hemmings takes the role seriously, clearly responding well to the film’s classy good looks — by 1975 not even many gialli had a visual caliber this high. Argento’s girl friend Daria Nicolodi provides smiles and a pleasant attitude, although the writing of her romantic scenes — perhaps an attempt at a more screwball tone to offset the grim killings — isn’t all that clever. A lot of this material was excised for the shorter International version. Although Argento cannot offer any stunning, unforgettable horror beauty to rival Barbara Steele, Ms. Macha Méril has a unique look. Argento also makes a respectful nod toward Italo film history with a highly visible role for Clara Calamai, of Visconti’s classic Ossessione. Calamai plays a retired actress, who is also the fussy mother of the main suspect, Marcus’s good friend.

The ‘murder machine’ aspect gets into gear whenever the rock music of Goblin cues a series of insert shots of the killer donning zippered leather gloves, and choosing an appropriate murder weapon. But the modes of killing become more varied. The only really over-the-top scene has a victim snared by a garbage truck and thrown into the middle of traffic — a particular sound effect makes his demise all the more distasteful (cue cheers from the 1975 audience). A final wipe-out killing probably does a good deed by making viewers more aware of the hazards of elevators – heavy machinery can be really unforgiving. As Kurt Vonnegut Jr. would say, ‘so it goes.’

My favorite scenes in Deep Red take place on a modern city square that is probably a set at Cinécittá: a traffic intersection ringed with concrete apartment blocks, a cement roadway, a lonely statue or two and a brightly lit Hopper-like eatery called “Café Blue.” When I dream about odd places, some of them resemble this under-populated, out-of-scale set. It has a powerful oneiric personality.

Arrow Video’s Region A+B Blu-ray of Deep Red has been described as an ultimate release of this giallo favorite. I am not the one to go through the history of Deep Red on video formats; the straight dope for that can best be found at the Mondo Digital page, where the authoritative Nathaniel Thompson displays an encyclopedic grasp of the subject. In the last sixteen years or so DVD launched many iterations of Argento films criticized for incompleteness or of dubious quality. From what I can see and what I’ve read, Arrow Video has addressed most if not all complaints. Two Blu-ray discs contain both the original (127-minute) and shorter (105-minute) cuts, with Italian and English tracks and a full complement of subtitles. The scans were reportedly made from original Techniscope elements. I see little or nothing to complain about, just an unbroken series of beautiful, clean and colorful images. Many notes on previous releases have addressed a botched ending with a freeze frame applied to a final shot of Hemmings’ reflection in a fountain — here the water remains in motion for the credits crawl: ‘You have been watching…” 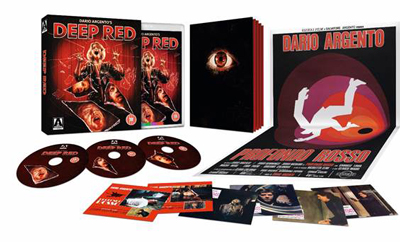 Arrow’s full list of extras is below. I think most of the added value items have come from earlier editions but there are new items. Do expect featurettes repeating scenes from the movie ad infinitum, and do expect interviews revealing beautiful actresses showing the passing of time since giallos were the hottest thing in Rome.

My check disc kit includes only the two Blu-rays discs, which are said to be identical in content to final product. My favorite way to view the film is with the English-language track on the original version: whenever Italian-only material pops up the track reverts to Italian with subtitles. In this way we can see what was cut for the shorter release as we watch. The Isolated music score is an instant soundtrack album synched to the film. But I can’t comment on the extra music CD or the other goodies in this deluxe collector’s edition. Arrow’s souvenir booklets carry authoritative and entertaining essays and reviews.