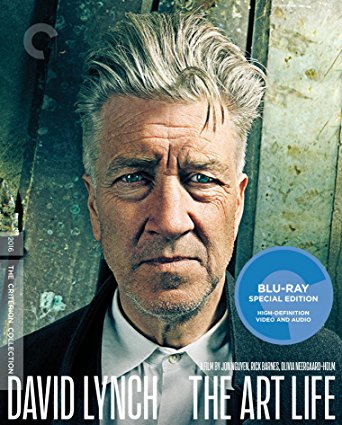 Twin Peaks: The Return recently ended its 18 hour run on Showtime and with that it can be said that the 41 year old cable channel finally made good on its name. Directed by David Lynch and co-written with Mark Frost, The Return see-sawed from soaring fly-overs of Manhattan and Vegas to suffocating dungeons infested with oily-skinned ghosts. It was pictorial storytelling on a grand scale, a work of epic surrealism that challenged the capabilities of any ordinary television screen. 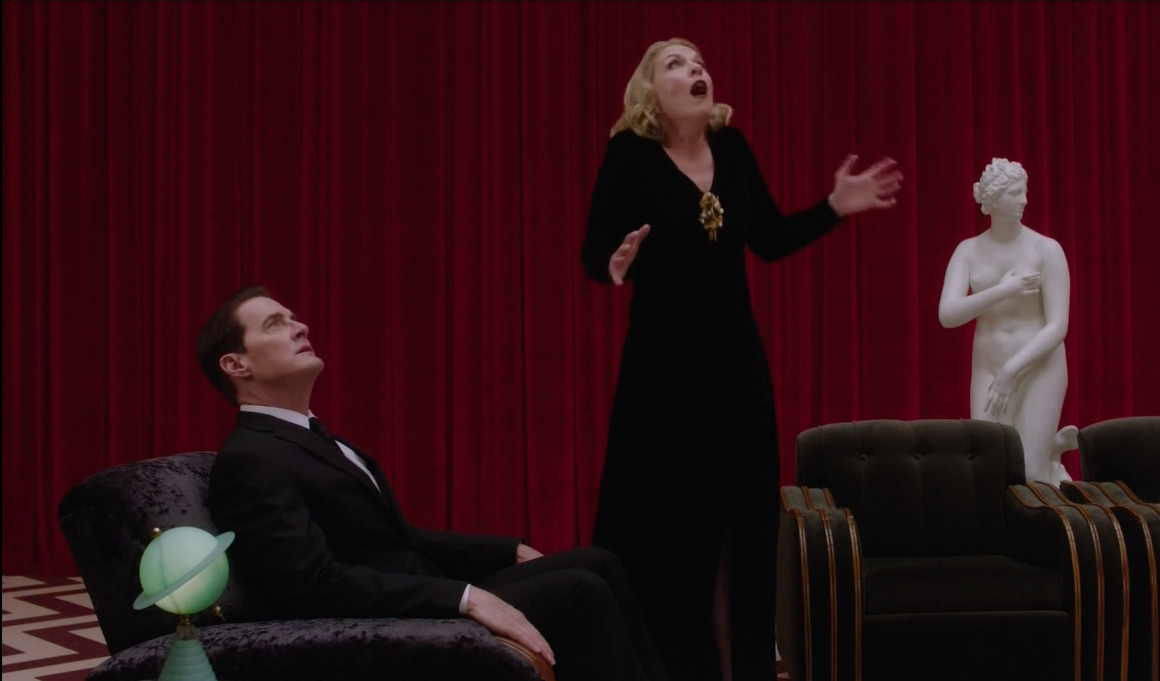 If Lynch and Frost viewed the 1990 incarnation of Twin Peaks as a relatively benign first draft populated by lovable eccentrics, Twin Peaks: The Return could be seen as a take-no-prisoners revision, pushing a well-loved community of characters into darker, more dangerous territories. One thing is clear, minute to minute it was the effort of an artist working with the full power of his skill set including a stunning standalone episode (Gotta light?) that delivered a near-wordless allegory about the birth of good and evil, a cosmic collision of the twin mythologies of Kubrick’s 2001 and Lynch’s own Eraserhead.

In 2014 Lynch told The New York Times, “I’m lost in a transition” and the finale of The Return bears this out. The show reached its “conclusion” (never were quote marks more necessary) with two back-to-back episodes that not only steered clear of any earthbound solutions but instead projected the inhabitants of Twin Peaks onto a bigger, more complicated canvas, sending Agent Cooper and Laura Palmer into a disorienting timeloop, a nightmare with no expiration date. Debbie Harry said “Dreaming is free” but in Lynchland, there’s always a steep price for sleepwalking.

The Lynchian brand of surrealism has been practical-minded from the get-go. Eraserhead, featuring a mysterious factory worker unleashing sperm-like globs into the netherworld, evoked a child’s fable explaining how babies are made. Startlingly original, Lynch’s self-proclaimed “dream of dark and troubling things” seemed like a new form of folk art. For the last four decades the director has maintained that wide-eyed view of the underworld; though his work is synonymous with danger and dementia, behind the red velvet curtain there was always an authentic innocent in charge of the machine.

Directed by Jon Nguyen, Rick Barnes and Olivia Neergaard-Holm, David Lynch: The Art Life, is a 2016 documentary about the artist with the focus squarely on his painting. They can’t escape the elephant in the room though; the canvases paraded in front of the camera are constant reminders of his movies, inextricably linked by their raw technique, dark humor and banshee imagery.

The filmmakers’ time with Lynch stretched over a four year period, staying fairly invisible as the camera captured him immersed in the indelicate nature of his craft, smoothing a gluttonous mass across the canvas, smudging oily water color onto acetate. Lynch recorded his recollections separate from the on-camera segments and, though he’s notoriously circumspect with his words, he’s talkative about his early childhood experiences, only retreating when his confessions become too intimate.

The film has a sunny backyard look with Lynch supplying his own smoke machine for the lovely lighting effects (he has an unquenchable appetite for cigarettes, threatening at any moment to disappear in the gauzy haze that follows him like Pigpen’s dust cloud.) Anyone familiar with Lynch’s embrace of lackadaisical pacing will be perfectly at home with the artist, watching him putter away in his sun-specked outdoor studio, sipping wine and delighting in games with his little daughter Lula (evoking a poignant memory of Don Corleone and his grandson in the garden). 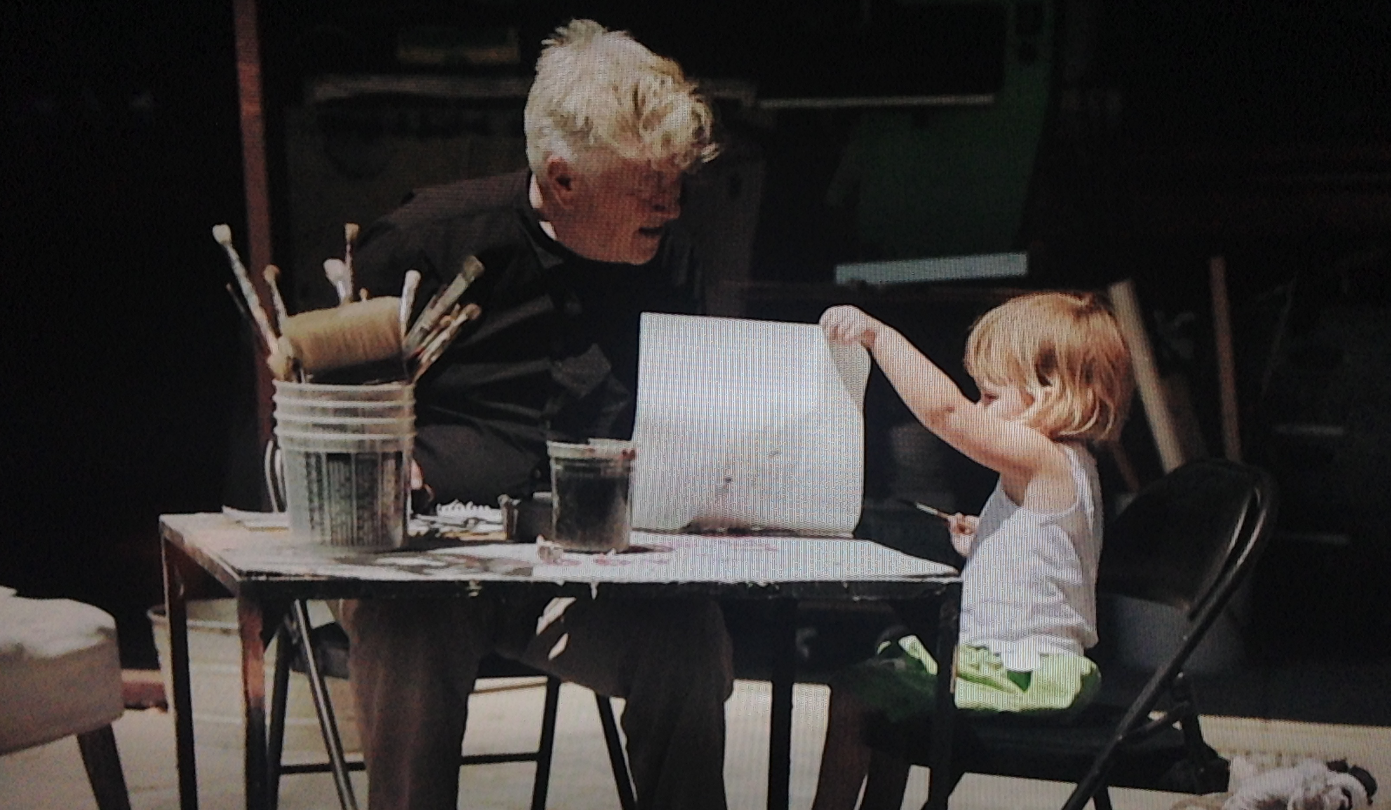 While the paintings from his over-50 year career are immaculately photographed in great high definition detail, the viewer is constantly startled by the familiar images that would find new life in his films, in particular the oft-used trope of a gaping mouth vomiting a stream of paint, a decades old mantra that prefigures the airborne “mother” of The Return’s Gotta Light? episode. Sadly, his cartooning (including the weekly LA Reader strip, The Angriest Dog in the World*) goes unmentioned. Too bad because his drawings, with their authoritative, rigorous line work deftly reining in their amusingly obtuse narratives, are far less derivative than his paintings; Lynch is, at his core, an illustrator.

The film also reminds us of Lynch’s debt to his forerunners including his 2007 lithograph, Factory at Night with Nude, which looks as if he set fire to an Edward Hopper landscape. Or the Ed Kienholz installations that inform so many of Blue Velvet’s nostalgic yet otherworldly interiors. Or Lynch’s concept of the mouth as a grotesque sinkhole that had its origin in Francis Bacon’s tortured profiles.

The documentary’s greatest success is in its warmhearted profile of the hard-working artist himself, a restive lion in winter. It was his admiration for the protean aspects of life and art that lead him to recast his late friend David Bowie as a giant tea kettle for a pivotal moment in The Return (it smoked almost as much as Lynch). 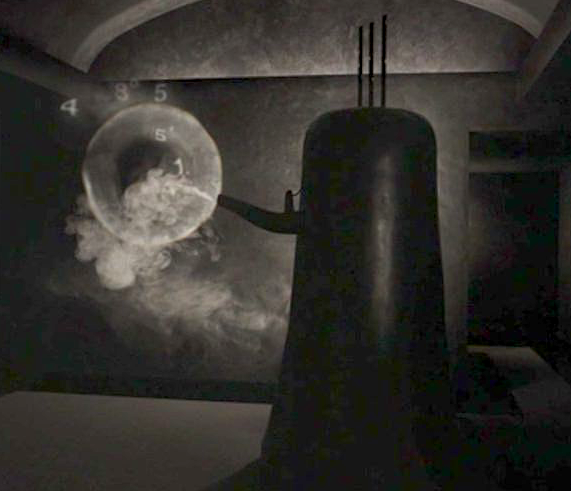 On 1979’s Lodger, Bowie sang, “Sometimes I feel, that I need to move on, so I pack a bag, and move on”. But if The Art Life tells us anything, it’s that you can move on while sitting still in your studio. That might be where Lynch is right now, painting, dreaming, still lost in a transition.

Criterion has released this fine documentary in a somewhat spare form (in comparison to their many extras-laden discs) with an interview with Nguyen and the theatrical trailer the only supplements. Nevertheless the excellent replication of Jason S.’s vibrant cinematography and Lynch’s pensive yet good-natured company make for an insightful portrait of the great artist in his studio.

*Here’s a typical panel from Lynch’s The Angriest Dog in the World that ran from 1983 until 1992 in the LA reader. A weekly cartoon that duplicated the same artwork week after week but with different captions, the strip was its own timeloop, a grotesquely funny meditation on the futility of anger.

And here’s a facile but well-researched video comparison of Lynch’s films and their fine-art origins from Menno Kooistra and VoorDeFilm:

The Art of David Lynch from VoorDeFilm on Vimeo.