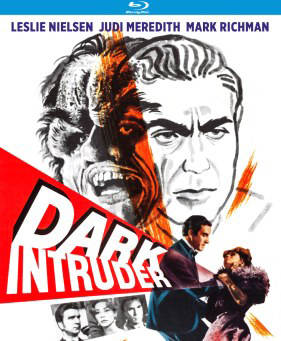 Produced in 1965, Universal Pictures intended Dark Intruder for television but when NBC executives screened the film they took a pass—set in the goth-friendly year of 1890, Barré Lyndon’s story, with overtones of Lovecraft and demonic possession, was deemed “too scary” for the living room audience. That same audience would weather an entire season of My Mother the Car so perhaps Hollywood was underestimating America’s ability to deal with adversity. Universal was undeterred—now officially a “feature”, Harvey Hart’s film opened that summer in Los Angeles alongside Torn Curtain and in New York on the bottom half of a bill with I Saw What You Did (Manhattanites were treated to a personal appearance from Joan Crawford). 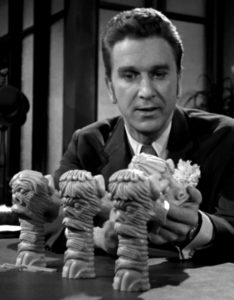 With the advent of roadshow attractions like Lawrence of Arabia, those double bills were becoming scarce in ’65—they harked back to a golden age when studios would package a shorter film with the main attraction—along with newsreels and cartoons—to give ticket-buyers plenty of entertainment value for the price of a ticket. Dark Intruder is retro in other ways—it’s a reminder of Universal’s horror heydays with its story of a wretch saddled with a supernatural curse—man by day, monster by moonlight. And it features a finale that Lon Chaney Jr. could identify with—a step-by-step transformation scene from ogre to human. The man on the trail of that monster is Brett Kingsford, an amateur sleuth with a working knowledge of the occult. A series of gruesome murders in San Francisco’s alleyways has compelled the chief of detectives to bring in Kingsford and their only clue is one found at the scene of every crime—a sculpture of a Sumerian demon whose toothy grimace becomes more prominent with each new murder—signs that the monster is growing stronger by the hour. 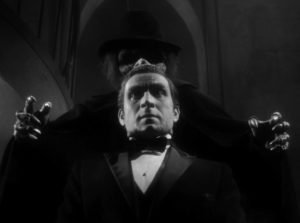 Kingsford has an even bigger clue in his own backyard—a friend by the name of Robert Vandenburg, a dealer in arcane objects who is suffering blackouts—not garden variety fainting spells but the sensation of being pulled into another dimension. Vandenburg is convinced he himself is responsible for the slayings—Kingston begins to agree when he’s attacked by a hooded monstrosity in his friend’s own antique shop. Thanks to screenwriter Lyndon the final act of this 59 minute thriller packs a satisfying punch missing in most of its running time—despite the concerns of those TV executives, Dark Intruder is weak tea for a generation weaned on Karloff’s Thriller and EC comics. 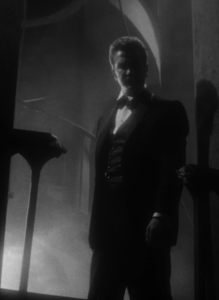 Universal did its best to promote the movie as a powerhouse horror show but the big screen only emphasized the paucity of its small screen origins. The scene is set in the late 1800’s but the mood is anachronistic—actors like Peter Mark Richman as Vandenburg, and in particular Judi Meredith as his fiancée (who is as emblematic of the 19th century as Jean Shrimpton), have a distinctly contemporary feel. But no one is so out of place as Leslie Nielsen as the monster-busting detective. In 1965 the actor was midway between the square-jawed Commander John J. Adams of Forbidden Planet and the cosmically obtuse Frank Drebin of Police Squad and The Naked Gun. Having spent decades specializing in humorless authoritarian figures in countless police procedurals like The New Breed and The Bold Ones, his appearance as the self-absorbed Dr. Rumack in 1980’s Airplane was a comic revelation—just as stoic as Commander Adams but a sandwich short of a picnic, Nielsen delivered his lines in the even-handed mode of a by-the-book automaton. And the jokes landed with the force of a sledgehammer;

Rumack : You’d better tell the Captain we’ve got to land as soon as we can. This woman has to be gotten to a hospital.

Elaine Dickinson : A hospital? What is it?

Rumack : It’s a big building with patients, but that’s not important right now.

In Dark Intruder, Nielsen attempts to play it both ways, as a twinkly farceur in the manner of one of Dino’s Matt Helm films, and as a no-nonsense supernatural ass-kicker. Usually a confident presence in any vehicle, for once, Nielsen is flailing. 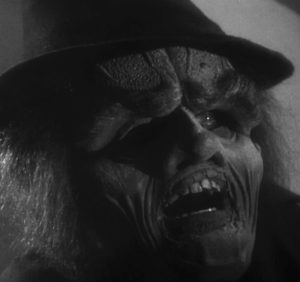 One crew member who is definitely not flailing is cinematographer John F. Warren whose scrumptious imagery recalls George Robinson and John J. Mescall’s lustrous shadow play for many of Universal’s greatest horrors. Warren was behind the camera for everything from Daughter of Dr. Jekyll to second unit work on The Ten Commandment to Dark Intruder‘s theatrical companion Torn Curtain. Far less compelling is the movie’s main attraction, the Sumerian hellspawn looking for a new lease on life. With make-up credited to Bud Westmore, the creature itself is risible—with a crouch, a limp, and wearing a long cap and hat, he’s reminiscent of another Universal monster, Boris Karloff’s (and stuntman Eddie Parker’s) Mr. Hyde in Abbott and Costello Meet Dr. Jekyll and Mr. Hyde. But it’s the creature’s kisser that will have you scratching your head—”where have I seen that before?” Then the dawn breaks—the sunken eyes and up-turned nose are kissing cousin to James Cagney’s Phantom of the Opera make-up in Universal’s The Man with a Thousand Faces. Mr. Hyde and the Phantom have the same thing in common, Universal’s house monster-makers, the Westmore dynasty. Make-up artist Craig Reardon isn’t sure who to credit for the creation of the “Dark Intruder” but floats a guess that it might be Mike Westmore—scion of the Westmore family. He’s interviewed on the new Blu ray from Kino  Lorber.

Kino’s new release is a beauty, Warren’s work looks positively velvety. Kino has also included an audio commentary from film historian/screenwriter Gary Gerani. The interview with Mike Westmore is a nice look back but he’s listed as Bud Westmore’s son—he is, in fact, Monty Westmore’s son (Monty was a third generation Westmore who continued in the family business). A handful of trailers, including the original theatrical trailer for Dark Intruder, rounds out the extras.