Double your Diabolik and double your pleasure! … this Australian import chases a domestic disc onto the market after only a few months, but of course comes with irresistible new extras to tempt collectors and completists. Mario Bava’s funny, dynamic action thriller was the first feature to really capture the graphic art ‘feeling’ of comic panels — we wish he’d directed a whole series of Diabolik adventures. The evaluation section notes the small differences between this disc and the U.S. release from last April. Just when did the general run of fantasy fans become aware of Mario Bava and Dino De Laurentiis’ Danger Diabolik?  I think it wasn’t until the near-simultaneous breakout of the Internet and DVD, which made film culture news easy to disseminate and the films themselves more easily seen. In the decades previous almost the only way to discover new and exotic films was to participate in some kind of academic film culture. Remember the proliferation of mimeographed fanzines?  The interest was there, big-time.

Alain Silver and James Ursini’s 1970s writings on Mario Bava in the long gone but much appreciated magazine Photon put down for the first time in English many revelations about Bava’s style and directorial approach. But those seminal genre writers stuck to Bava’s gothic horrors, skipping this futuristic comic book romp in the maestro’s filmography. Diabolik initially breezed through U.S. theaters in 1968 as a minor release, hitting few small markets and more or less remaining invisible. I first heard about it through John Baxter’s 1970 book Science Fiction in the Cinema, and caught it by accident at a midnight screening in Santa Monica in 1972 or so. It was Paramount’s studio print and the music and the color completely blew us away. 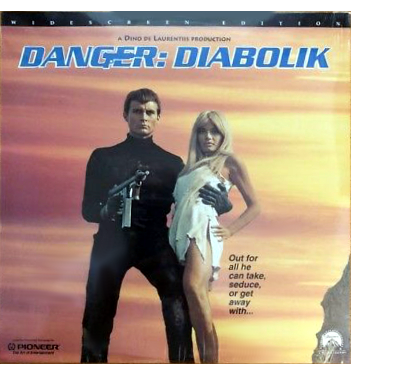 So I guess I was hooked. In three years at UCLA I must have rented Film Incorporated’s slightly edited version three times, foisting it on (appreciative) ‘dormie’ audiences. Much later, when Greg Jein showed me fliers advertising collectors’ prints, I ended up buying a 16mm print, and then swapping it for another of slightly better quality.

I spread the word about the film as best I could. It was perhaps 1995 when a cheap VHS and a laserdisc appeared, with an altered soundtrack ( ←). In my first (1998) ‘MGM Video Savant’ appreciation of Diabolik I explained that a number of voices had been replaced for the laserdisc. 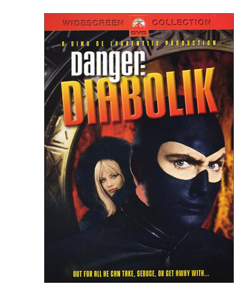 All that was corrected in 2005 with Paramount’s DVD produced by Kim Aubrey at Zoetrope (→). Just this year, a domestic Blu-ray fixed the last complaint on CineSavant’s gripe list — the relative volume of Ennio Morricone’s sensational music score was raised to its proper high level. Those great cues now function like Morricone’s music for Sergio Leone: when the music plays, it stands out front and center.

So, since I’ve reviewed Danger: Diabolik two or three times already, this time instead of covering the same ground, let me link new readers to my review of the U.S. disc from April of this Year. It has some pretty pictures, too.

I will repeat one excerpt from the April review because it commemorates the way we ex-film students would run into celebrities and actors here and there, in editing rooms, drugstores, at Pink’s Hot Dogs on La Brea, and sometimes recognize them and say an appreciative ‘hi.’ Some of those memories are real highlights.

This particular story is second-hand: my friends Steven Nielson and Wayne Schmidt spent the summer of 1981 in Salt Lake City editing some horror movies for Philip Yordan. One of the pictures starred John Philip Law, who was around Yordan’s editing shop quite a bit. One day Law passed Steve & Wayne’s editing room and did a double take when he saw the Danger: Diabolik poster that Steve had pinned to the wall. Wayne remembers that Law shouted, “Great!” and stopped by to talk. He was jazzed that his movie was remembered and liked. Either that, or like-minded film nuts were few and far between in Salt Lake City. Just as in the commentary, Law praised Mario Bava’s camera genius. Wayne remembers that Law told them:

“On the first day, Bava called me over and
said, ‘I’m a dog with actors. You’re on your own.’”

When the subject changed to The Golden Voyage of Sinbad, Law became self-effacing:

“Oh, you have to play that kind of role big.
Otherwise nothing happens on screen but
a bunch of guys
standing around, whining, ‘What do ya wanna do now, Sinbad?’”

Viavision [Imprint]’s Blu-ray of Danger Diabolik is video-wise pretty much identical to Shout! Factory’s release from earlier this year. It isn’t the exact same encoding, as Shout!’s framing carries the thin black bars of 1:85 matting and [Imprint]’s is opened up to 1:78. (I checked left-right in a couple of places, and am convinced that the image has not been enlarged). The difference will be negligible to all but the Aspect Ratio Gestapo. Both audio tracks seem the same as well.

I know well the luxury of being able to double back on a second commentary for the same film, to correct whatever errors one made the first time. Here Tim Lucas gets to revisit Diabolik after a fifteen-year gap. His first track was a friendly Q&A discussion with the late John Phillip Law, revealing the actor to be a down-to-earth congenial type. For [Imprint]’s exclusive commentary Tim returns to his academic-analytical route. He digs into the original Italo comic strip, the aborted first production attempt, and Bava’s false start with actress Catherine Deneuve (!) as Eva Kant. We also enjoy additional details about the not-so-terrific relations between Bava and his producer.  De Laurentiis apparently saw the need to micromanage and critique every expenditure even though Bava left untouched most of the budget placed at his disposal. 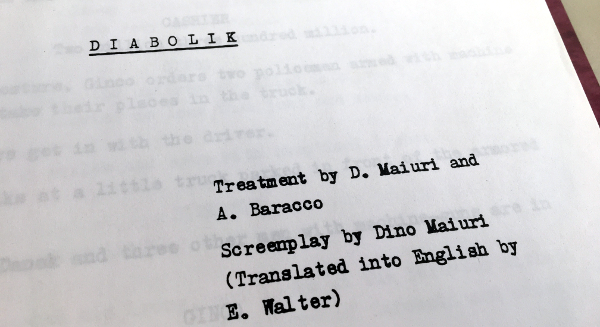 Tim also offers nice info on numerous production people, like the great designer Flavio Mogherini and the experts that filmed the underwater scenes. He notes that the sitar heard on the Morricone soundtrack came before the Beatles popularized all things Indian, but after George Harrison had used the instrument in a couple of Beatles tracks. He looks at the writers assigned to the show — I have a copy of a Diabolik screenplay by Dino Mauri with Adriano Baracco, translated into English for Paramount’s files. It has many similarities to the finished film, especially near-identical dialogue bits… were they taken from the original comic strip?

The tone, context and most details are different in this first draft. Eva Kant is given a ‘Robby the Robot’- like robotic valet as comic relief, besting the talking computers of Modesty Blaise and Barbarella. Eva and Diabolik have much more to say to each other, and the dialogue is more domestic, mock-argumentative. In this draft Diabolik murders at least four cops in the first scene. Diabolik shows Eva the corpse of a girl in the trunk of his car, that he used as part of a crime caper: nobody can be allowed to see his face and live.

Bava and the add-on writers reshaped the material quite a bit, dropping most of Diabolik’s cynical, casual homicides. It’s still a bit off-putting when he kills some ordinary policemen. In this script our ‘hero’ slaughters people as a daily habit.

Diabolik was Mario Bava’s biggest foray into mainstream high-stakes filmmaking; Lucas affirms that he was not at all happy working that way. As a cameraman back in the 1950s Bava is said to have resisted directing at all. He likely saw too many directors frustrated by business politics and big-money interference. Rather than lose control he retreated to ever-smaller productions.

Most of Tim’s technical explanations of the special effects are illuminating, and the ones I disagree with probably have more to do with terminology than a misunderstanding on his part. Tim examines the film’s design theme of circles and that strange ‘color tunnel’ behind the main titles. My personal take always related it to the graphic transition device in the Batman TV show, the spinning comic art-thing.

The second new extra is an audio presentation by Kat Ellinger, heard over a repeating background of production and advertising images for the film. Ms. Ellinger gets deep into genre, design and textural issues, and even gender politics. Using her free-association format, Ellinger provides future students with a gold mine of thematic references to steal for term papers. She offers multiple arguments for the superiority of Diabolik’s anarchic world-view over the conformist, Manichaean politics of the Marvel superhero universe.

The standard Paramount extras produced for the 2005 DVD are here as well. We still shake our heads at the clueless 1968 trailer — Tim Lucas identifies the trailer narrator as Telly Savalas!  The Batman craze had surely become America’s closest point of identification with Diabolik so it’s hard to understand why Paramount’s advertising would downplay the film’s comic-book spoof aspect. Instead of introducing America to a new fumetti anti-hero, the U.S. trailers and posters just show a generic action-guy doing ‘action stuff’ like shooting a machine gun, scuba diving and squeezing a blonde girlfriend covered in money.

I’m told that by now this Australian release of Danger Diabolik might be a collector’s item: [Imprint] is listing both it and Major Dundee as sold out, but perhaps that’s only from the company store.

[Imprint]’s cover illustration ‘flops’ the movie’s standard poster illustration left-to-right. For some reason the composition looks improved, although the text on the $20 bills is backwards. Yes, I had to use a magnifying glass to check.