Fans that lament Orson Welles’ many career frustrations will flip over this Spanish-filmed masterpiece. Not well distributed when new and MIA for decades, its serious audio problems have now mostly been cleared up. It’s great — right up there with Kane and Touch of Evil, and it features what is probably Welles’ best screen acting. 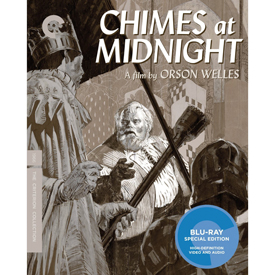 It’s even better than I remembered. Sometime during film school I went with UCLA friends Clark Dugger or Randy Cook to a Fox Venice screening of Chimes at Midnight, also called Falstaff. The soundtrack was all but inaudible, yet it was obvious that it is one of Orson Welles’ best movies. He plays the lead role, and in terms of acting, it might be his best picture altogether. Welles is perfectly suited physically to play the blustery, liquor-soaked old hell-raiser Falstaff, but he also brings to the role an entirely likeable part of his personality. Falstaff is a braggart, a liar and a coward, and we love him just the same. He’s great company. 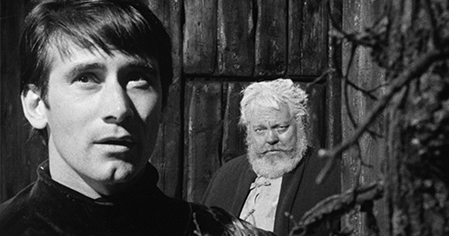 I’ll skip through the mostly well-known basics about Chimes at Midnight. After the relative critical success of The Trial, that rascal Orson got lucky, and found solid financial backing for a picture to be shot relatively cheaply in Spain, with two or three big stars. Extras on this disc suggest that, right up to the beginning of shooting, his producers thought they were getting a version of Stevenson’s Treasure Island. The character of Falstaff appears in more than one of Shakespeare’s play, and the idea of combining his adventures in one story is credited to Raphael Holinshed, one of Shakespeare’s contemporaries. With a budget sufficient to rent a couple of castles, quite a few horsemen, extras and costumes, Welles fashions a period picture with an epic feel. Perhaps everything needed for a costume picture could be had cheaply in Madrid, after the Bronston epic machine broke down. The millions Samuel Bronston spent filming 55 Days at Peking are definitely on the screen, but that movie is dramatically inert. Chimes has a great story and acting, plus a battle scene that rates with the best in film history.

Henry IV (John Gielgud) assumes the throne of England. As it by law belongs to another in the line of succession, the nobles Worcester, Northumberland and Hotspur Percy (Fernando Rey, José Nieto, Norman Rodway) instigate a rebellion. Henry worries that his son Prince Hal (Keith Baxter) won’t rally to his side, or that he is unfit to serve — Hal spends all of his time drinking and causing trouble with his rogue friends, under the influence of Falstaff, his corpulent, thoroughly shameless uncle. Hal is indeed carousing, whoring and committing robberies with his merry friends, at the inn/brothel of Mistress Quickly (Margaret Rutherford) where the main attraction is the amorous Doll Tearsheet (Jeanne Moreau). But when the call comes to defend the crown, he and Falstaff rally for battle. Except that the cowardly old Falstaff has no intention of putting himself in harm’s way. 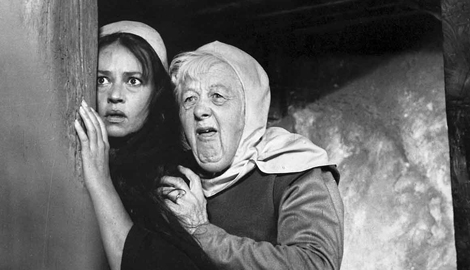 Chimes at Midnight is just plain brilliantly directed, stem to stern. Welles focuses on the characters and the lines they speak, and his energizing visuals don’t overpower the simple dramatics. He makes a lonely woods, a really ratty inn, and some cavernous castle interiors into extremely exciting places to be. The minor characters are neatly sketched, from Hal’s unscrupulous associate Ned Poins (Tony Beckley) to Falstaff’s buddy from the old times, Shallow (Alan Webb). As envisioned by Welles, most of the scenes are comedic — Jeanne Moreau behaves like a bawdy bed-warmer, while Margaret Rutherford is charming as the landlady amused (and cheated) by her jovial guest.

Yet the grand speeches are there, led by John Gielgud. The famed actor only needed to know where his light was to deliver orations with the power to make even Welles speechless with respect. Welles’s Falstaff is not in every scene, and more than once is an amused bystander while Shallow and Mr. Silence (Walter Chiari) mug and clown as if on The Goon Show. Since Falstaff is the butt of quite a few jokes, and is fully aware of his status as a buffoon, he doesn’t hog the spolight. Yet his speech about Honor — basically a stack of excuses as to why he leaves fighting to others — makes its point beautifully.

Welles somehow gets away with making arid Spain stand in for soggy London Town; the walls of Avila that were assaulted in Stanley Kramer’s The Pride and the Passion serve nicely as the view outside the bawdy inn. The production never seems cramped. Viewers expecting the old, ‘three spear carriers can be made to look like a hundred’ tricks will be impressed by Chimes: for the few scenes where they’re needed, he makes perhaps forty look like 150. Mistress Quickly’s inn has no lack of women running about, watching and laughing. And Welles has at his disposal enough costumed and armored soldiers to pull off an incredibly good battle scene. A long line of knights with lances charges to initiate the battle, which instantly becomes a melee of mud-covered fighters bashing and stabbing at each other. Filmed in contrasty B&W on a rain-soaked field, the ‘noble’ knights are just butchers, mangling their foes with knife and mace. The handheld camerawork gives an impressionist view of the fighting — which becomes a mess of blurry action and grim details. One doesn’t have to make excuses about low budgets, as the battle is better than most anything like it before or since.

Falstaff is there at the start to wish the troops a hearty send-off, and is there at the finish to make blatantly false claims of victory. During the messy mayhem he’s off hiding in the bushes. Hal has decided to take his lineage seriously, and faces off with his equally noble adversary, Hotspur. It’s a beautiful sword duel because we know the temper of the men fighting. Hal is a tearaway who wants to be worthy of his station. Hotspur is not at all a villain. We’ve seen him part with his lovely wife (Marina Vlady). Before the fight he greets Hal in friendship. The whole battle could have been avoided, had Hotspur’s cohorts accepted Henry’s offer of forgiveness. Falstaff’s words about honor apply to the bigger tragedy as well. The story doesn’t allow Hal’s victory to be righteous, just as his father admits (in private) that he’s more or less stolen his crown. 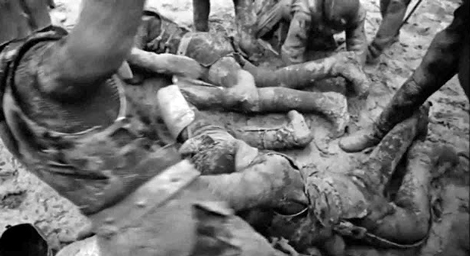 The penultimate scene of Chimes at Midnight works so well that it is best left unspoiled. It’s a very simple scene, as opposed to the constructions of special effects, halls of mirrors and whirling camerawork that make some of Welles’ earlier work so exciting. Instead we get one of the more touching moments in costume movie sentimentality. Welles specializes in grand, bigger-than-life characters, but for once we really empathize with him on a level that goes beyond theatrical flourishes.

Actually, some of the ‘theatrical’ scenes in the movie are Welles’ best work. I think my mind wandered in high school when the poor English teacher tried to get us excited about ‘scenes within scenes’, where characters stage a play that reveals more about their relationships. Hal and Falstaff do this with a makeshift throne and a pot on Falstaff’s head, and it works like gangbusters. It shows how they feel about Hal’s father, the king — they make jokes, but actually both fear and revere the man. 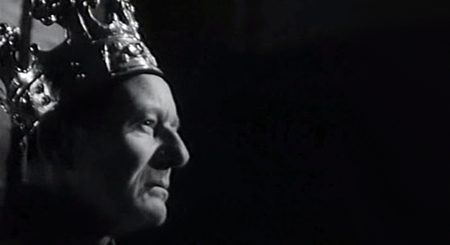 It often seemed that Welles the actor hid behind his stage makeup tricks. As Falstaff he’s constantly offering a new side of the crafty old boozehound. When we first see him he looks just like the Santa Claus of the 1940’s Coca-Cola ads, with rosy puffed-up cheeks, and a ‘nose like a cherry.’ Plenty of scenes show Falstaff drunk and goofy, or cozening a landlord with praise to get another drink on credit or to cover being caught in a ridiculous lie. Falstaff huffs and puffs for the benefit of the troops, acting as if he were a great warrior. He’s incorrigible, trying to take credit for a kill right in front of the man who actually did the fighting. Yet we still love the old bastard. I sort Welles’ film performances into categories: 1) gaudy, 2) pretty good, 3) great, and 4) what were you thinking when you sculpted that silly nose? His Falstaff in Chimes at Midnight has depth and humanity to spare. In one scene, his face is so ale-soaked that Doll Tearsheet can shake and rumple it like bread dough, until his eyes point in different directions (top image ↑).

Chimes at Midnight, aka Falstaff aka Campanadas a medianoche isn’t as magnificent as Citizen Kane nor as flashy as Touch of Evil, but I’d rate it his next-best picture. Better yet for film fans, until now it has never been available in a decent transfer, image and audio. It’s surely Criterion’s most prestigious, most highly awaited release of the year. 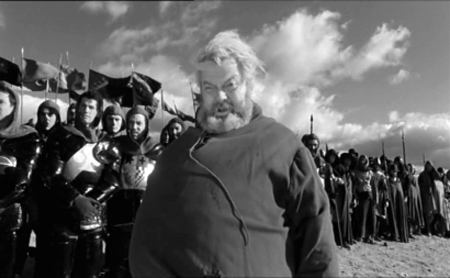 The Criterion Collection’s Blu-ray of Chimes at Midnight is a knockout. The B&W cinematography by Edmond Richard (The Trial) is back to its widescreen richness, from the shafts of silvery light slicing down in Henry’s throne room, to the mud-on-mud-on-mud ick of the knights-in-armor battle. I found the sound to be excellent. Back in the one screening I saw in the 1970s, the distortion on the audio track was so thick that I made out one word in twenty, and the stylized dialogue from the play guaranteed that I followed less. Like I say, the movie was still riveting.

The present restoration was done in Spain in 2009. The audio in a few scenes is mildly distorted — crunchy on sibilant consonants — but not in a distracting way. A reel or two toward the back the level of some of the dialogue gets to be a little low for a few seconds. My ears are unreliable for a final assessment; I’m lucky if I catch when Welles personally overdubs some minor character’s dialogue. I have a friend who takes a keen interest in everything Welles and is waiting for his copy to assess the audio and hear what changes may have been made. If he notices anything major I might amend or append the review in a few days.

The extras gather several noted Welles experts — biographers James Narramore (a commentary) and Simon Callow (an interview), and historian Joseph McBride (an interview), who relates his own adventures meeting Welles and acting for him back in the early 1970s. A long interview with actor Keith Baxter gives us his memories of playing Prince Hal, which include performing a stage version of Falstaff in Ireland, a few years before the film was made. An excerpt from The Merv Griffin Show turns out to be a good interview with Welles from his editing room for Chimes. The interviewer hits him with the old questions (“What about Citizen Kane?”) and Welles handles them without a hint of resentment. The insert foldout text essay is by Michael Anderegg.