Hissable villain Bela Lugosi is in denial — no, actually star Edmund Lowe is in the Nile, deep-sixed in a sunken sarcophagus. Lugosi’s up top trying to get his art deco death ray in running order — opposed only by some nubile babes and a Great White Hypnotist from the Swami school of mind control. 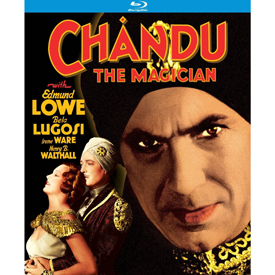 Around 2008 Fox Home Video made a last big push with genre releases on DVD, and commissioned a wealth of interviews from an added value company called New Wave. I talked about Voyage to the Bottom of the Sea mainly because they needed somebody willing to do so, but just about every appropriate sci-fi and fantasy spokesman was tapped as well. We gabbed about vintage Fox attractions like Just Imagine, a title that unfortunately didn’t rate a release. 1932’s Chandu the Magician did make the grade for DVD. Following in the footsteps of Paramount and MGM, Fox began licensing its library for Blu-ray to Twilight Time, and is now granting grazing rights in the Fox vault to Kino as well. 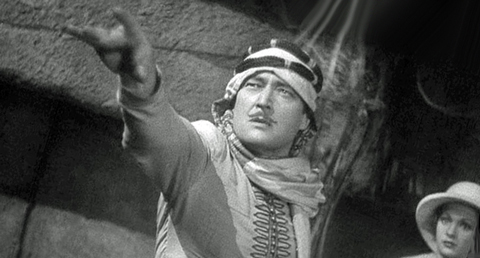 Sourced in a radio serial, the marvelously entertaining Chandu the Magician plays as if it were really meant for children — except for a scene or two that revel in pre-Code extremes. A naïve action thriller with a story from the lower rungs of the comic book imagination, Chandu is set in the white man’s conception of exotic Egypt. Its impossibly flat, arch dialogue advances the plot and little else. But the fast-paced show is also played completely straight. Edmund Lowe is a thoroughly wooden hero, forever striking Mandrake the Magician-like poses. Two elements will guarantee enduring fan interest. The magnificent visuals are provided by cameraman James Wong Howe and designer / effects genius / co-director William Cameron Menzies. And the villain is none other than Bela Lugosi, at the height of his Hollywood fame.

Adventurer and justice-seeker Frank Chandler (Edmund Lowe of Dillinger) finishes his studies at a school for Yogis, and proves his mastery of the mystical arts by weaving strange visions in men’s minds. His teacher renames him Chandu, and dispatches him on a fated mission, to prevent the fiendish madman Roxor (Bela Lugosi) from stealing the secret of a death ray from scientist Robert Regent (Henry B. Walthal), who happens to be Chandler’s brother-in-law. Roxor has a slimy Arab helper, Abdullah (Weldon Heyburn) and an army of not-too-bright Egyptian minions to help him. Chandu enlists the aid of his old army servant Albert Miggles (Herbert Mundin) and an old flame, Egyptian princess Nadji (Irene Ware). True to form, the dastardly Roxor kidnaps and threatens most everyone in the cast list, to force Robert Regent to put the death ray in running order. Chandu can hypnotize anybody that can see his eyes, but that doesn’t help much when Roxor straps him into a sarcophagus and drops it into the middle of the Nile.

You know, every time I watch Tyrone Power return from the High Lama in The Razor’s Edge claiming that he’s been given the wisdom of the ages, I think of Chandu the Magician and have to suppress giggles. Inscrutable, mysterious oriental magic has propped up nonsense pulp fiction ever since England annexed the whole of India. Bearded Indian Yogis have nothing better to do with their time than train noble Englishmen to be great heroes. Chandu is now a master of the oft-used ‘power to bend men’s minds,’ and he uses it to turn scores of cowardly bad guys into fools. Obi-wan Kenobi’s Jedi Mind Tricks come in handy, but Chandu can conjure up any illusion he wants, just with a commanding stare. It’s lucky that the film has superior direction, a rapid pace and charming special effects, because star Edmund Lowe is singularly uninteresting, a smiling stiff. His only grace is behaving with utter nonchalance no matter whose life is in danger. What a maroon. 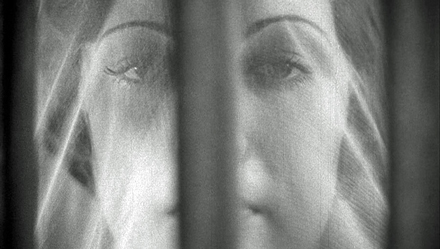 Fortunately for us, Lowe is supported by a great production and attractive talent. Bela Lugosi is an excellent black-hearted villain, the kind of foreign menace that writers like Sax Rohmer needed to personify the yellow / Arab / Hindu Peril. But despite his mad speeches Lugosi never really seems in charge. He supplies none of the knowing, winking complexity that Boris Karloff effortlessly added to similar roles, namely the same year’s The Mask of Fu Manchu, which also makes use of a death ray. Still, Bela is in fine form. He clearly enjoys contorting his fingers and reciting Roxor’s menacing speeches: “I shall be greater than any pharaoh!  Civilization and all its works shall be destroyed!  Men shall return to savagery following only one supreme intelligence… me!” 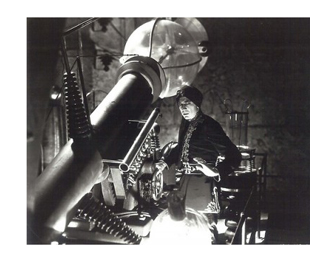 Today’s informed film addicts will check out Chandu to glom the terrific work of genius designer William Cameron Menzies. The sets for this exotic adventure are as good as anything made until Raiders of the Lost Ark, and they’re all enhanced with marvelous effects tricks — mattes, miniatures, the works — that remain impressive even when they’re not wholly convincing. Chandu’s hypnotically induced visions begin with a simple rope trick; soon he’s creating phantom doubles of himself to sneak into crypts and elude pursuers. A good running gag has Chandu torment his dipso sidekick Miggles with a recurring case of the hypnotic DTs: every time he takes a drink, Miggles hallucinates a little version of himself. Sure enough, a ‘mini-me’ Miggles haunts Miggles from then on, appearing in a kitchen cabinet and even on a little camel. The script sure missed the boat with the Miggles running gag: the obvious capper would be to have the miniature Miggles pull out a bottle of his own, so they can drink together.

The killer death ray is the standard Acme chrome & glass item that converts high voltage into a blazing shaft of light. One scene has Roxor waxing fiendish over the joy of blasting Paris and London into ashes, a sight that William Cameron Menzies turns into an impressive special effect. Of course, that’s all the wishful thinking of an overreaching arch villain. Try as he may, Roxor can’t get his &%@#! death ray to function. Even his main flunky has morale issues:

Roxor: “At last! I have my vengeance against Chandu!”

Abdullah: “Yes, but that still doesn’t tell you how to operate your death ray!”

Give a guy one little death ray, and he loses all perspective on his personal potency. Not surprisingly, the supposedly gentle inventor Robert Regent also acts pretty mad-scientist-y when he tests out the ray by vaporizing a giant block of concrete. There’s supposed to be a peaceful use for this weapon?

Yet another excellent effects moment involves an Egyptian statue that comes to life. It’s the kind of gag that shows up in Three Stooges and Abbott and Costello comedies, and never works very well. Here it’s quite a jolt, an impressive illusion. The man really looks as if he were carved out of sandstone. And when Chandu sends out one of his illusory selves, Roxor’s swordsman is horrified to see him disappear, at first leaving behind his empty clothing. The effect is similar to set pieces in Toho’s later The H-Man. 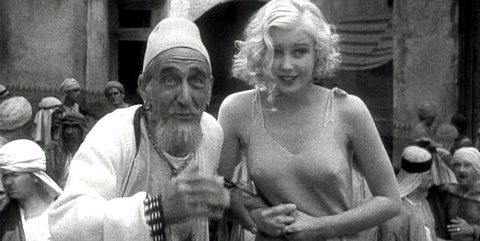 Beautiful Princess Nadji is one of those slinky types that claims to be dedicated to her people, yet wears classy Paris fashions and spends her evenings draped luxuriously in the salon-like stern of her Nile boat/yacht/barge/whatever. Roxor elicits the assistance of the scurvy bedoin blaggard Abdullah by promising to give him Nadji as a new slave for his harem. Abdullah’s look of lust at this prospect is far too adult for the kiddie matinees.

As if that weren’t enough to establish Chandu as a prime pre-Code title, we’re treated to a racy slave auction scene that reportedly attracted some regional censorship back in 1932. Chandu’s niece Betty Lou (June Lang) is a blonde cutie with a baby-doll voice. Kidnapped from her bed and sold at auction, Betty Lou shudders and shimmies in a nightgown far too revealing for the Production Code. This gift to lonely males in the theater audience may have been responsible for making Chandu a no-show on TV in the ‘fifties and ‘sixties (at least in the markets I had access to).  “Hey Mom, do I have a cousin Betty Lou like that?”

Chandu the Magician doesn’t cut production corners. It hops briskly from one scene to the next yet holds together well by virtue of what in 1932 passed for top-quality eye candy. No Republic serial short cuts here: every shot features an interesting set and expressive lighting, and every scene is enhanced with an impressive special effect. The movie creates its own elaborate self-contained artificial fantasy world, where trap doors and creepy stone passageways lead to a nonsense-science mad lab with an art deco death ray. Shivering white women shudder at the thought of being defiled by leering ‘dark men.’ Chandu reinforces every outdated colonial stereotype in the book, but it’s so blockheadedly innocent that it doesn’t matter. 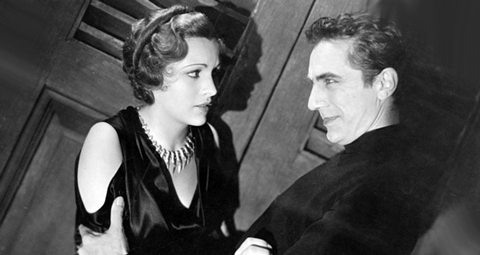 The KL Studio Classics Blu-ray of Chandu the Magician is an excellent transfer that Fox put together eight years ago for a DVD release. The film element sourced has some scratches and a splice break or two, but otherwise is intact. The images are vivid and the audio quite clear. Only one mumbled dialogue line by Bela Lugosi was difficult to make out, and I wouldn’t be surprised if the original editor couldn’t hear it either. The fact that June Lang’s sexy slave auction scene is still there leads me to guess that Chandu was perhaps not reissued after the adoption of the Production Code — if so that scene would have been the first thing to go. Many pre-Code movies ended up trimmed of ‘offensive’ content, among them the fantasies The Mask of Fu Manchu and King Kong.

I didn’t listen to all of Gregory Mank’s informed commentary so he may give the answer to that question. We do learn that at least one state or city asked that June Lang’s auction scene be trimmed. A worthy authority on early horror pictures subject, Mank relates at length what is probably every knowable fact about this picture and its interesting personnel. He explains that the show wasn’t a big success, yet a sequel followed, in which Bela Lugosi changed roles and played the hero Chandu. It’s almost sad — it’s too easy to visualize Lugosi ecstatic at the prospect of playing a romantic leading man, convinced that better offers would come in the future. It didn’t work out that way. 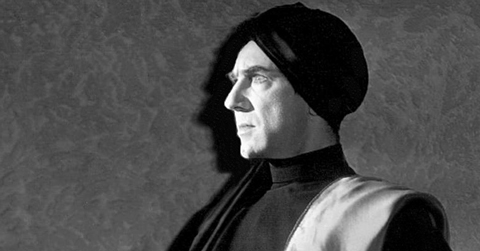 New Wave’s fifteen-minute featurette from 2009 or so brings together a great many spokespeople, even Kim Newman and Ray Harryhausen, each of whom offers only a couple of sound bites about the movie. Except for a few stills the piece has only DVD-quality feature film clips to illustrate the same behind-the-scenes stories from Mank’s more thorough commentary. But everybody seems to be having a good time. Another short extra shows examples of dirt clean-up in a restoration demonstration. And trailers are included for Kino’s releases of the Lugosi films The Black Sleep and White Zombie.

Confirmed fantasy fans will flip over this disc of Chandu the Magician, especially if they’ve never seen a good copy. It’s much livelier, and far better-looking, than comparable fantasy serials of the 1930s.