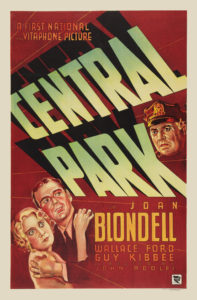 If they still made ‘em like the pre-Code drama Central Park (1932), I’d still be going to the movies every day instead of looking more to TCM and Netflix and the unwrapped section of my own DVD and Blu-ray collection for reasons to stay home. There are at least four bloated modern blockbusters playing at a theater near you right now at $18 a pop (I’m looking right at you, Hobbs, and you too, Shaw) which don’t have a tenth of the storytelling electricity and enthusiasm that this near-forgotten Hollywood programmer gushes in spades over the course of its 58-minute running time. The average 21st-century Hollywood action thriller, and even some of the more sincerely intended dramas pitched at adults, can leave you enervated and annoyed rather than satisfied, overstuffed with backstory and a heavy-handed approach to character, or simply overloaded on sensory input designed to distract you from the thinness of the material.  But as directed by journeyman John G. Adolfi (who only lived to make three more pictures after this one before dying of a cerebral hemorrhage in 1933), Central Park snaps to attention right away and crams so much juicy stuff in between the First National Pictures title card and “The End,” all presented in the unpretentious style of a medium still feeling its way around synchronized sound, not to mention art, that audiences in 1932 had to have been thrilled at what they got for the 35 cents it cost them to get into the theater. Eighty-six years later, the movie is still fresh, funny, wild, sentimental, maybe even a little shocking, and it moves like lightning. 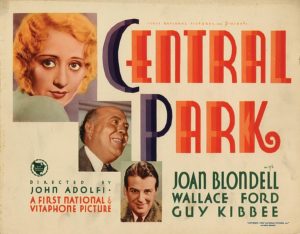 “Nothing ever happens in Central Park anymore,” says Eby, a Central Park zookeeper, to Charlie (Guy Kibbee), the beat cop who’s walked the park for his entire career. “People have even stopped trying to commit suicide around here,” he marvels. Maybe so, but there’s plenty to keep a guy like Charlie occupied, and only a slim chance he’d be able to see it clearly. You see, Charlie, one week away from getting his pension and retiring, is losing his eyesight, a fact he’d like to keep quiet from his superiors so he can finish out his week on the zoo beat without incident. He bumps into Dot (Joan Blondell) sitting alone on a park bridge and, perhaps with the reason of experience, assumes the worst. But it turns out Dot, a jobless drifter looking for a lucky break that’ll land her on the stage, is just waiting and hoping to reconnect with Rick (Wallace Ford), an unemployed rodeo rider from Arizona whom she met while both were drooling over hot dogs at a parkside diner which neither could afford. (While the owner argues with Rick about loitering, Dot slips in and lifts a frank for herself and this guy who she correctly figures is as desperate as she is.)

Dot gets involved with some shady gangsters claiming to be cops who rope her into a scheme where she’ll pretend to be the winner of a Fifth Avenue’s Most Beautiful Girl Contest, a fund-raiser for the city’s unemployed. Dot doesn’t know it, but she’ll literally be holding the key to the gangsters being able to bust into the locked box where the donations are kept and make off with the dough. 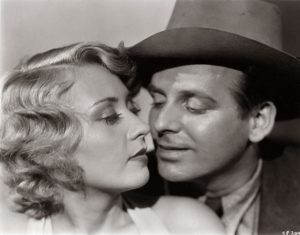 Meanwhile, ex-zookeeper and diagnosed lunatic Smiley (John Wray) has escaped from the “booby hatch” where he was committed a year earlier after exploding and slashing a fellow zookeeper who he observed not being kind enough to the caged animals. One colleague describes him has having an unusually friendly, perhaps even romantic attachment to the wild cats—“Only last week (Smiley) sent the black leopard a box of chocolates!”

The gangsters spot Rick talking to Dot and, assuming he’s somebody—maybe even a cop—who might interfere in their completing the scheme, kidnap him in an attempt to keep him out of the way. “If that mug tries to start anything,” the thug assigned to watch over the bound-up Rick assures the big boss, “I’ll spill him all over the rug.” You will not be surprised to find out it doesn’t turn out that way.

Achtung, pre-Code fetishists! Back at the zoo, the twirly-eyed Smiley shows up to exact a spectacularly gruesome demise for the zookeeper he tried to take out a year earlier. Smiley is spotted by the half-blind Charlie, who has stopped by the wild animal display to play with a new litter of tiger cubs, but Charlie, unable to see him clearly enough, mistakes him for someone else, allowing Smiley the opportunity to grab his cranky ex-colleague nemesis and drag him toward the lion cage…

Did I mention the mad lion that goes on a rampage through Central Park and a particularly unlucky nightclub soiree? 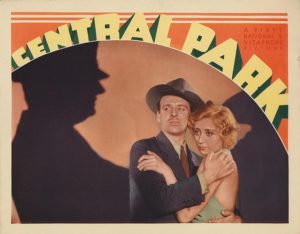 Central Park is packed to the rafters with wild dramatic developments like these and more, and there’s even room for the set-bound production to wedge in some stock footage of the actual park the way it looked during the time of shooting. That includes a spectacular (and spectacularly wobbly) aerial shot over the expanse of NYC’s biggest, lushest playground which opens the picture, leading to an opening montage of all the things you might have seen in the park at the time, including joggers, horse riders, buggy riders, bums practicing opera on a park bench, lovers lounging in a floating boat, and even a herd of sheep being guided across the lawns to God knows where.

The movie is a ton of fun as it spills out wild development after wild development, but the real charm of Central Park, however, lies in the talents of its players. Ford is a serviceable nice guy who manages to eke out some bona fide personality, despite the screenplay’s routine conception of his character, and he does find a way to put the lassoing skills of an ex-rodeo rider to use. Kibbee is a character actor who ought to be well familiar to fans who claim some experience with pre-Code Hollywood cinema (Taxi, 42nd Street, Golddiggers of 1933, anyone?), and he’s genuinely touching as Charlie, a sincere public servant who discovers that fate has a way of messing with the best-laid of retirement plans. 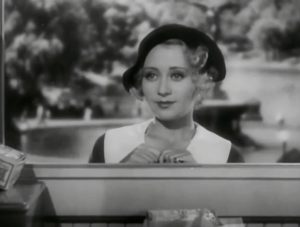 And though she is but part of the ensemble approach to storytelling that characterizes Central Park, this movie belongs to Joan Blondell’s wit and her inescapable eyes, which more often than not would tell the story of her character even if she wasn’t so deft with the wisecracks and sarcasm the writers supply to her. I’m always somewhat taken aback when I realize that Blondell, so good in so many crackling comedies and dramas of the period, never became the leading star she seemed destined to become, using movies like Central Park as a springboard. (See 1933’s Blondie Johnson, if you ever get the chance, to experience Blondell stretch her range and knock one out of the park.) No doubt she had great longevity and a prolific career as a character actress, but the way she wraps the audience around her finger in Central Park makes one think about the alternate universe in which she might have landed the sort of roles that would have put her in the same league with Carole Lombard or Jean Arthur, a starscape in which she surely would have been one of the brightest constellations. As it worked out in reality, at least we have her in this movie, and in many others better and worse. Blondell is a treasure no matter where you see her, but Central Park is one of her shiniest jewels.

Central Park is as yet unavailable on DVD or Blu-ray, though it would seem a perfect candidate for resurrection through the good graces of the Warner Archives. But it does show up on TCM occasionally, and when next it does you would be well-advised to have either your eyeballs or your DVR at the ready. Or you could go knocking on the door of the Library of Congress, which holds a nitrate print of the movie in its vast collection, one which might hopefully be the source of a possible physical media release sometime in the near future.