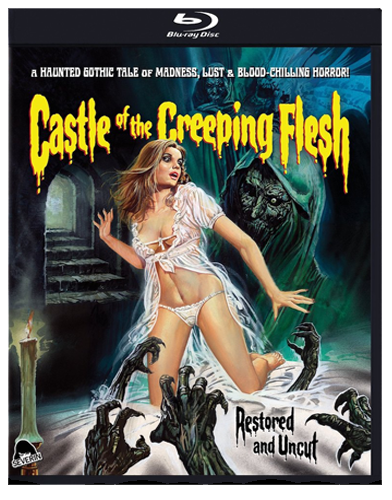 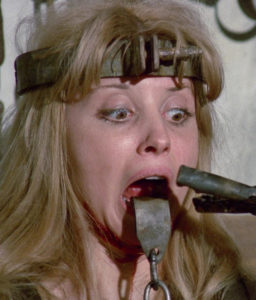 Just in time for the holidays, it’s Castle of the Creeping Flesh. The film’s director, Adrian Hoven, helmed a mere seven films but one of them made grindhouse history. The movie was Mark of the Devil and the campaign for that 1970 stomach-churner was a perfect compliment to the degenerate nature of the product—for once there was truth in advertising. Hallmark Releasing made their name with bottom-feeding fare like Last House on the Left and Slaughter Hotel and if a film wasn’t truly debauched they could make it appear so—in 1972 they retitled Mario Bava’s Bay of Blood to Twitch of the Death Nerve—incomprehensible but portentous. For Mark of the Devil they arranged a give-away—a sack that could double as a popcorn bag emblazoned with “This vomit bag and the price of admission will enable you to see… the first film rated ‘V’ for violence.” Hallmark’s crude but unforgettable poster made it clear what ticket-buyers were in for with a front-and-center graphic of a young woman poised to have her tongue removed. Next to that eye-catcher was a carny barker’s promise, “Positively the most horrifying film ever made.”  The movie, jam-packed with wall-to-wall dicing and slicing, lived up to at least some of the hype, as far as it went. But back we go to Castle of the Creeping Flesh, for which a vomit bag would have been just as welcome—but for reasons other than medieval torture. The open-heart surgery for starters. 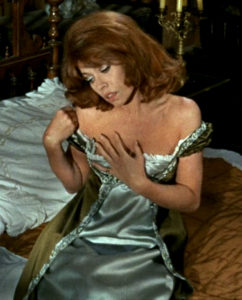 That surgery is real—it was stock footage of a procedure filmed for medical students and it’s sprinkled throughout the film just for a little spice, like cayenne pepper. The anonymous doctor’s hands in those clips are supposed to belong to Howard Vernon who play-acts the mysterious Dr. Saxon (the heart-transplants are some inexplicable efforts to return his daughter to the living). In order to procure more material for his experiments, Saxon has opened his castle to a band of wandering sybarites including the glint-eyed  Michel Lemoine and Jess Franco favorite Janine Reynaud. A very confused evening awaits everyone, including the audience, as the film darts back and forth between aforementioned stock footage of surgery, flashbacks to the horrible rape and murder of Saxon’s daughter, Lemoine licking his lips and Reynaud gyrating in the sheets (the only flesh that’s creeping in this movie is hers). The filmmaking is so inept that any sense of narrative or even time itself dissipates like gas fumes… and like gas fumes, the stench remains. 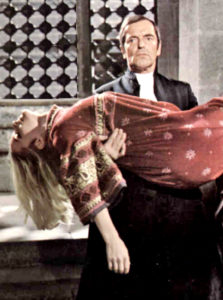 The film opens with what is usually a welcome sight, the Constantine Pictures logo and fanfare which, for at least one moviegoer, means an Edgar Wallace movie, which therefore means witty and capable directors like Alfred Vohrer and skillful farceurs like Joachim Fuchsberger who could be counted on for an evening of sophisticated shocks. Hoven’s movie is the polar opposite, a lazy, zoom-happy hack job reminiscent of a Franco sex film (Hoven produced Franco’s Succubus and directed his own soft-core epic, The Long Swift Sword of Siegfried). Filled with lingering close-ups of heaving flesh and arterial sprays it’s the kind of masturbatory movie-making that turns on the director and no one else. Severin Films, on the other hand, is in the business of giving pleasure and their new Blu ray proves you really can polish a turd. Almost. They’ve gone the distance for Hoven’s film starting with a transfer of Jorge Herrero’s cinematography that is probably the best this will particular movie will ever look and some thoughtful extras including:

Adrian in the Castle of Bloody Lust – An archival Interview with Joyce Hoven and Percy Hoven. Hoven directed Castle under the pseudonym “Percy G. Parker” which may have been a tribute to his then three year old son, Percy. Percy the younger, best known today as host for the German version of Big Brother, also had a role in Mark of the Devil II, the 1973 sequel to his dad’s most infamous film. There’s also a question and answer segment with The Hoven Family at Austrian Pulp Film Fest, a featurette on the shooting locations for Castle and a series of trailers.