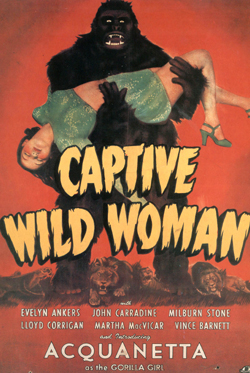 A circus ape transforms into doe-eyed sex-bomb Acquanetta via a brain swap performed by mad doctor John Carradine. A sci-fi twist on Universal’s popular wolfman cycle, this was the first in a trio of ‘Paula the Ape-woman’ movies (including JUNGLE WOMAN and JUNGLE CAPTIVE). Resourcefully directed by former editor Edward Dmytryk, who structures his low budget thrills around circus footage from Kurt Neumann’s 1933 THE BIG CAGE. Even with all that extra padding, the whole thing tops out to a zippy 61 minutes of gorilla-girl action.