Randolph Scott fights to let the railroad go through in this old-fashioned rip-snorting action adventure movie, the kind where shooting bad guys means never having to say you’re sorry. Jane Wyatt gets top billing but the big burner on this prairie is newcomer Nancy Olson, who puts more sex appeal into her homegrown heroine than all of her later roles combined. 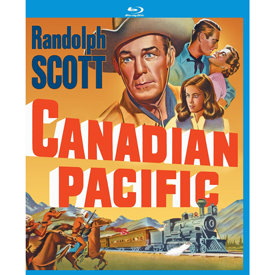 All Randolph Scott movies aren’t created equal, although I can say that I never saw one that was really bad.  Just having that good-looking guy sitting a saddle or talking to the leading lady is always relaxing. Once upon a time we all shared a basic definition of American decency, and heroes like Randy led the parade. 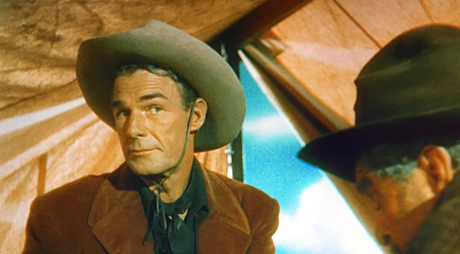 Kino has come up with a real wonder movie, not one that you would think would confound the experts when it came time to remaster it in good quality. The Blu-ray of Canadian Pacific comes with restoration extras that are longer than the movie itself, and so technical that we wish there were an abbreviated summary of what was done…. I’m not sure what WAS done. It all stems from the fact that this 1949 picture was filmed in Cinecolor — not the later, better process but the original late-‘forties 2-color Cinecolor with a separate emulsion on each side of the film base. As there was as yet no Eastman mono-pack color film in 1949, a producer could either go with the vastly expensive Technicolor or choose from various less desirable systems associated with particular labs. Producer Nat Holt made a bunch of westerns with Randolph Scott. Some were in Technicolor, but for his first independent production he went with Cinecolor. The vagaries of that system almost guaranteed that by the time came for a sale to television, it was primarily shown in B&W. Until now I didn’t even know it was in color. More on this below.

Canadian Pacific has a lot going for it. Filmed amid glorious scenery in Alberta & British Columbia, it has a fine cast and a reasonable script tilted to the positive by spirited performances and good direction by the competent Edwin L. Marin. The story plays to Randolph Scott’s strengths. Railroad troubleshooter Tom Andrews (Randolph Scott) knows that various subversives are trying to stop the progress of the Canadian Pacific under construction across the great Canadian plain. Hiss-able villain Dirk Rourke (Victor Jory, looking suitably demented) has riled up the locals with the idea that the railroad will take away their livelihoods, when he is really protecting his own selfish interests. Rourke encourages acts of violence and sabotage, and has tricked the not-very-bright Indian tribes into attacking the railroad construction crews as well. With his crusty sidekick ‘Dynamite Dawson’ (J. Carrol Naish), Tom is identifying bad apples in the crews and roughly ejecting them. This attracts the ire of Quaker doctor Edith Cabot (Jane Wyatt), who earns catcalls when she upbraids Tom’s violent ways. Tom thinks it doesn’t matter, as he’s quitting to go marry his sweetheart Cecille Gauthier (Nancy Olson in her first movie). Cecille gives Tom an amorous welcome, but when he learns that Rourke has organized all the locals to fight the railroad, including her father, he returns to camp. Recovering from one of Rourke’s violent attacks, Tom falls in love with Dr. Edith.  Will he return to his first sweetheart, or will he die in the prairie railroad war? 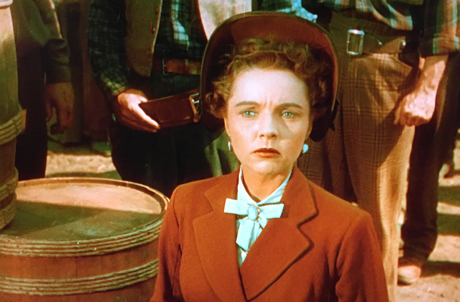 Randolph Scott is in great form, fending off Jane Wyatt’s withering words with gentlemanly grace. It is no wonder that Dr. Edith is attracted to him, but what with all the harping on pacifist issues we can guess that she isn’t going to be hearing any wedding bells. Fairly easily interpreted as an anti-Commie parable, Canadian Pacific has the dopey Edith counseling disarmament just as a whole passel of savage redskins threatens to wipe out the honest railroad people, who are only trying to Make Canada Great Again. And who knows, maybe the Canadian railroad lobby wasn’t as corrupt as were our American railroads, that invented the concept of the corporate power grab.

The action is fast and fun, and it’s particularly relaxing to see Randolph Scott solve most problems with his good manners and fast wit.  J. Carrol Naish is a good fuzzy-faced sidekick too, despite one scene in perfectly rotten taste: captured by the ‘childish savages,’ Dynamite Dawson gives them all cigars to smoke … but they’re lit sticks of dynamite. Boom! No kidding, big yocks there. The railroad workers are just as childishly manipulated — not long after shooting several troublemakers (actually Rourke’s agents), Tom cajoles the work crews into becoming a fighting team again Just by saying a few words about team spirit and a ‘job well done.’ 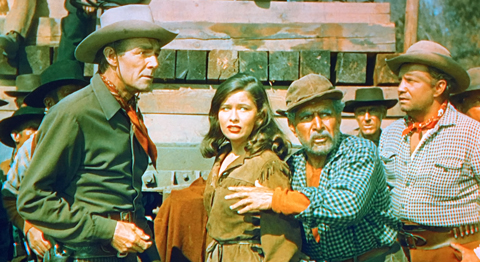 There’s no need to nitpick the realism of individual scenes, but Canadian Pacific puts forward one concept tailor-made for the Mythbusters show. Tom Andrews is loading a wagon with dynamite when that scallywag Dirk Rourke sets it off with a well-placed bullet. The huge explosion looks to have blown our hero to kingdom come and then some. But what do you know — the next scene shows Tom recovering in Dr. Edith’s wagon, banged up but intact, with his senses still functioning. Dynamite Dawson tells us that Tom was standing in a special protected ‘pocket’ just far enough from the explosion that all the force went elsewhere. I’d think that any notion that outlandish must be based on some factual precedent.

More interesting than the dynamite is newcomer Nancy Olson, who makes a much different impression here than with her celebrated roles as practical, reserved good young women in films like Sunset Blvd. and Union Station. We’re accustomed to seeing Ms. Olson standing with impeccable posture, as if she just earned a graduate degree in feminine deportment. In Canadian Pacific director Marin introduces her with a nicely timed romantic reunion. She bounces across a meadow, her long hair flying. She throws herself into Scott’s arms and rains kisses on him Every encounter thereafter is a big huggy-feely-kissy bout of physical affection. She’s gorgeous, virtuous and vital, and a good contrast with Jane Wyatt’s doctor, the one that crowds Scott’s natural violent charm. We love Jane Wyatt but this doctor is not a good role for her — she’s the uptight lecturer, even if her happiness with Tom inspires her to choose a more attractive makeover. 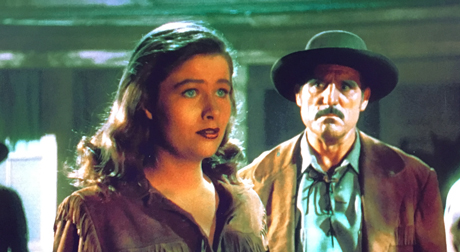 Nancy Olson seemed later to be shoehorned into Disney-type bland roles, at least in the pictures I’ve seen. Her performance here looks as if it were calculated to outpace Colleen Gray’s sensual, dreamy pioneer gal seen at the beginning of the previous year’s Red River, the woman who tried to convince John Wayne that she’d be mighty handy on those long, lonely nights. The effect is the same: to hell with the railroad, as Cecille has everything any guy with a pulse could want.

Ah… one more technical point from a guy who has fired a gun maybe three times in his life. The IMDB is correct when it calls out as bogus a scene in which a character says he heard a gunshot from a distant high-powered rifle before the bullet hit and ignited some dynamite. Bullets travel much faster than the sound a gun makes, so he ought to hear nothing. Western fans might not remember much about the John Sturges/Clint Eastwood 1972 oater Joe Kidd, but it did have one very instructive scene. When a sniper fires from afar at some riders, the bullets strike a second or two before the echoing gunshot is heard. It’s a regular physics lesson, kids.  It’s good that the writers of Canadian Pacific concoct good dialogue and witty banter for the characters, ’cause this script flunks the NRA’s basic citizenship challenge. 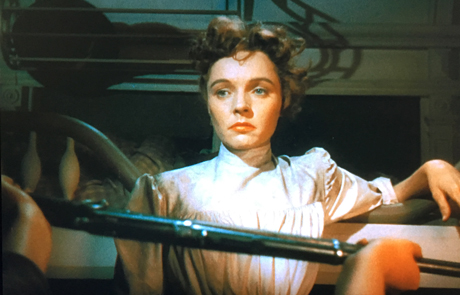 The KL Studio Classics Blu-ray of Canadian Pacific is a good encoding of a show filmed in a truly odd color process. It’s been restored and preserved for film and video, but they couldn’t bring it all back to original specifications. In fact, it would take a lab expert to judge what’s been done to the movie. A text preamble states that original Cinecolor is indeed a two-color camera process with two emulsions on either side of the film base: orange-red and cyan-blue. The Original Camera Negatives for this show were destroyed and the copy elements recovered were in poor shape, with shrunken footage and missing frames. The optical sound negative that was retained was in very fragile condition. The ending has one shot that only exists in B&W – the color version was tossed out when a distributor cut off the end of the film, to insert a new ‘the end’ card.

The bottom line is that this unusual Cinecolor show is more than acceptable all the way through. Just as with the weird color range in the Cinecolor movie Flat Top, just seeing what the odd hues look like is interesting… some scenes look like old magazine illustrations, where one of the inks has faded. Previous color versions were miserable, so this disc will be a pleasant surprise for Scott fans. If Canadian Pacific had been produced by a major studio, they might have protected it early on with whatever archiving dupes were available once Eastmancolor came in. 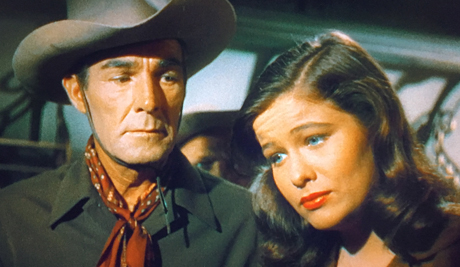 The disc is from a company called Ignite Films, yet another consortium organized to collect movies that drop through the cracks, ownership-wise. Some likely contenders appear on their website; including an announcement that Day of the Triffids is coming soon. A similar announcement has been there for at least four or five years now.

The sixty-minute German or Dutch documentary about the restoration is not a comparison demonstration or a rough explanation of Cinecolor, but an hourlong technical treatise with many lengthy text blocks explaining every step of the restoration process. It is thoroughly detailed, perhaps a bit too detailed for casual viewing. Fans with more interest in lab work may be intrigued but I would have liked a Reader’s Digest version as well. It is very handsomely produced. 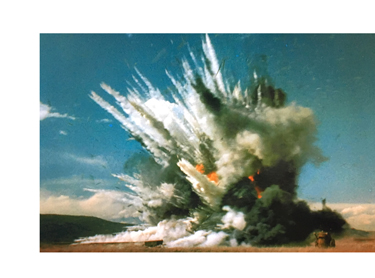 Also aboard are an 18-minute slice of a transfer made from a 16mm Canadian Pacific print. It looks miserable enough to have us celebrating the main feature encoding. As happens on other German discs, we also get the eight-minute Castle Films cut-down version, in B&W. Kino also gives us trailers for Canadian Pacific, The Cariboo Trail and The Gunfight at Dodge City. A disclaimer before the main show reminds us that Kino takes no responsibility for the content of the disc commentary. I think they’re safe from lawsuits, seeing as how the disc has no commentary.

One last note:  I believe that this spectacular shot of a powder explosion in Canadian Violent Pacific is the source for a shot repeated perhaps eight or ten times in Invaders from Mars, made four years later.