Neo-noir got a major boost with this splendid first outing for the Coen Brothers, who planned to produce something commercially viable but broke through with a new style in fashionable genre mayhem. A fantastic cast helps, including the auspicious debut of the great Frances McDormand. 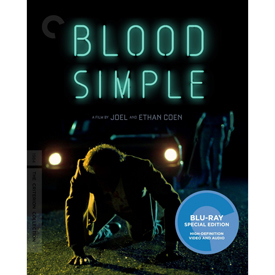 Although I hear a fair amount of grousing against the Coen Bros. entire approach to filmmaking, they’ve earned their place through the sheer entertainment value of their work. Reading a Variety review of movies debuting at a film festival in 1984, a notice for Larry Cohen’s Q, the Winged Serpent was accompanied by one for a movie with a funny title. The reviewer was charmed by the violent, hilarious complications the film generated around a film noir infidelity-and-murder tale. I had to wait several months to see this picture, but I knew I was going to like it. 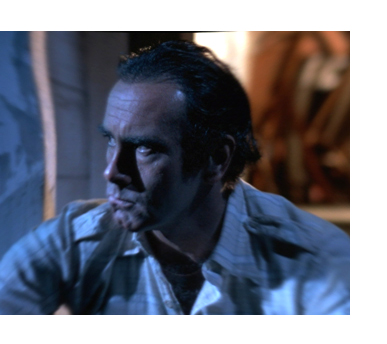 Not much critical respect has been lavished on the adventurous neo-noir films of the early 1980s, when a few progressive filmmakers aspired to reawaken the rich atmosphere and compromised morals of the classic American style. Lawrence Kasdan’s Body Heat may have officially kicked off neo-noir three years earlier, but Joel and Ethan Coen’s debut sizzler shifted the form into high gear. Wittily scripted, cleverly directed and given a production gloss that defies its humble origins, Blood Simple launched careers and proved that there was plenty of oomph left in the old Double Indemnity formula.

The Coen brothers’ story oozes laid-back, laconic Texan passion. Bartender Ray (John Getz) is helping his boss’s disaffected wife Abby (Frances McDormand) flee across Texas when they suddenly begin a torrid affair at a motel. Little do they know that Abby’s husband Marty (Dan Hedaya) has hired detective Loren Visser (M. Emmet Walsh) to get the goods on them — and then in a jealous fever hires the same detective to murder them as well. From that point forward the noir twists twist into double-crosses, as a sordid murder-for-hire becomes a study in desperate characters.

It’s fun to look back at the first films by established directors. Blood Simple confirms that many of the celebrated Coens’ most familiar themes were already firmly in place. It shows us the clever, playful camera tricks of the brothers’ first cinematographer Barry Sonnenfeld, such as the floating viewpoint that shadows a German shepherd down a hallway. Another show-off trucking shot follows the tennis shoes of bartender Meurice (Samm-Art Williams) and cruises down a long bar-top, soaring like a rollercoaster to avoid colliding with a passed-out patron. It’s true that some of these camera stunts earn disparaging remarks from critics that like more formalism. 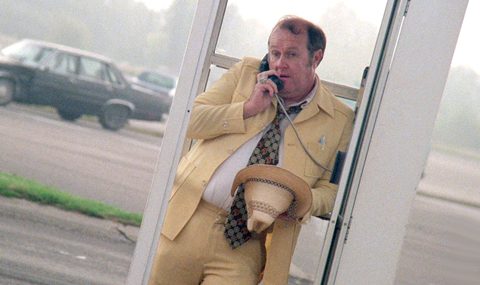 Blood Simple also gives us a chance to see everyone’s favorite Fargo police chief in her first role. Frances McDormand is arrestingly good as the harried spouse of the weasley bar owner. Dan Hedaya, he of the permanent five o’clock shadow, got everyone’s attention with this role. So did M. Emmet Walsh, whose weary, grudge-holding, Russia-obsessed detective is tone-perfect. As Loren Visser negotiates with Marty, the insects buzzing in his hair seem to be feeding off his insanity. Murder is fine with Visser; he’s just concerned with the tendency of murder conspirators to ‘go simple’ afterwards. From Arthur Penn’s The Chase onward, many movies have pictured Texas as an alien planet where the heat makes lovers more desperate and villains more venal. Blood Simple pegs the sour mood with the first look on every actor’s sweaty face.

As narrative storytellers Coen & Coen have us in their power from the beginning. Carter Burwell’s music syncs up with the windshield wipers of the lovers’ car, not with Psycho’s nervous strings but a droning Texas beat. Lean scripting limits the interior locations to a bar and a couple of residences but the wide-open highways and plowed fields keep claustrophobia at bay. Once the set pieces settle into place, we’re too busy watching the characters’ every facial twitch to become overly concerned with production values. The final 2/3 of the show are non-stop tension scenes. 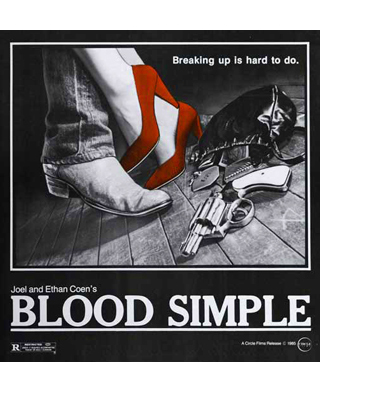 We know going in that this is a movie about killings and double-crosses, and the Coens entice us into their scheme with a Hitchcockian concern with incidental detail. Budding detectives should make note of various details. The pearl handled revolver. The envelope with incriminating photos. The cigarette lighter. Marty’s fishing catch, rotting on his desk like the uncooked rabbit in Repulsion. The safe. The hammer. A shirt with bloodstains. The back seat of a car with more bloodstains. We watch the four characters interpret these objects, a mystery for which none of them has a complete picture. Each acts in concert with their dispositions and natures. The slimy boss formulates his counter-extortion plan. The unethical detective uses his cackling laugh to cover up an inner rage. The runaway wife is desperately in search of a single trustworthy human. The bartender becomes an after-the-fact accomplice to murder because he’s acting on a completely false set of assumptions.

Neatly tricked out with those expressive (and yes, gimmicky) camera angles, Blood Simple almost looks too good to be an independent quickie. The Coens’ storytelling style seems to have burst in full bloom without need for development. The violent, funny and unpredictable chain of mayhem and misunderstandings has the feel of a demented episode of The Alfred Hitchcock Show, except that the ironic twists don’t stop for 95 minutes straight.

The Criterion Collection’s Blu-ray of Blood Simple is a really welcome disc, as it gives us a great new transfer of this special picture plus an honest critical appraisal with input from the filmmakers. The transfer is marvelous. We’re told the film was shot in a raggedy independent fashion, sometimes with raw ends of film stock. It’s so handsome, that’s hard to believe. 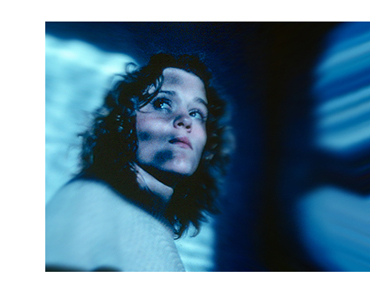 Back in 2000 the film was reissued, reinstating some editorial differences that their original distributor had made them remove for clarity’s sake. But they also added an annoying ‘Forever Young’ preface, a talking-head introduction that confused theater audiences. In this strange sixty seconds of film, a gentleman identifies himself as Mortimer Young and lets us know how happy he is that this masterpiece has been restored for mankind: “digitally swabbed” and with the “boring parts taken out and replaced with other material.” It’s an unwelcome in-joke, that makes fun of the audience’s interest in restoration, missing scenes, etc.. When the 2000 revision came to disc, we were given a joke commentary by someone calling himself Kenneth Loring, which played like an unfunny Monty Python sketch, or an unpleasant practical joke to see how soon listeners would turn the thing off in disgust. The filmmakers were surely trying to avoid having to comment on their own movie, and maybe somebody got the idea of lampooning lame audio commentaries (what, me worry?). But the prank fed Coen detractors’ desire to characterize them as cynical dilettantes, laughing up their sleeve at their provincial hick characters, and their own audience.

I almost wish I didn’t have to bring up that memory, as Criterion sweeps it away with the extras on this release. The Coen bros. sit politely for a long discussion section and partake with Barry Sonnenfeld in a critical reassessment of their visual achievement. Anybody with a brain would pronounce their work as a brilliant first film made with limited resources. We also get input from the sound engineer and composer. Especially welcome are long interview segments with Frances McDormand and M. Emmet Walsh, who is terrific. I ashamedly admit that I wasn’t aware that Walsh was still alive. What a great character — a Northerner despite that all-convincing Texas drawl he came up with. Ms. McDormand happily tells us the wonderful way she got the part — her roommate Holly Hunter turned it down.