Now a successful producer, John Wayne tries a big budget action picture with an anti-Communist theme. It’s The Alamo on a ferryboat, set in the far East where the locals are a hungerin’ for Freedom.  Wayne is an apolitical adventurer who just feels like savin’ Chinese and kissin’ Lauren Bacall. Ace director William Wellman holds it together — barely. 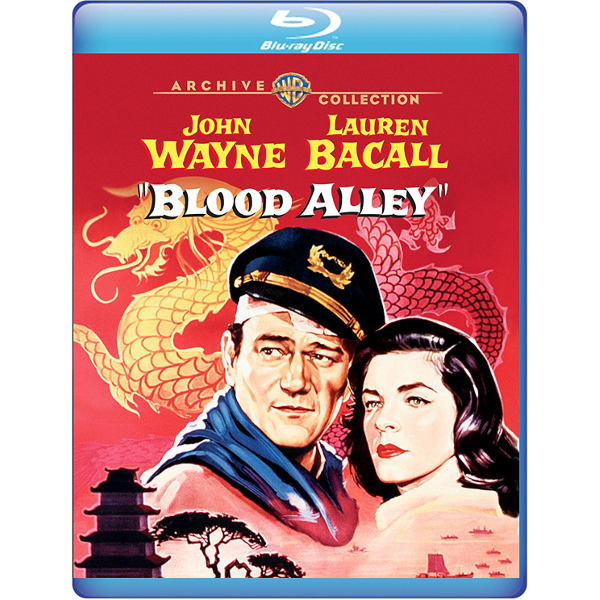 John Wayne was extremely busy in 1955, starring in movies for big studios as well as for his own company Batjac. He was rated the most popular Hollywood star and was making constant public appearances, many of them political. He hadn’t meant to star in Blood Alley, a topical tale about a sea captain helping an entire village flee from communist China, as he didn’t have two months to spend on location on the upper reaches of San Francisco Bay and the Sacramento River delta. But his trusted director William Wellman couldn’t abide star Robert Mitchum’s reported misbehavior, and reportedly asked him to be replaced. With no suitable male star available, Wayne took the role himself. Director Wellman hides the fact that Wayne’s time on location was minimized. Wayne and co-star Lauren Bacall had completely different political positions, but in Hollywood business always came before politics.

In the 1950s plenty of movies were made about individuals or groups of people fleeing Soviet-dominated Eastern Europe, but not that many about China, where Mao’s Communists had taken power in 1948. A.S. Fleischman adapted his own book, and Wayne thought it a natural for big box-office. An entire Chinese coastal village conspires to flee to Hong Kong on an ancient local paddleboat, and to pilot the boat they spring an American captain from a Red prison, Tom Wilder (John Wayne). Sneaking 180 people away isn’t that easy — the ferryboat isn’t the most seaworthy craft, and they must somehow tiptoe through 300 miles of Chinese waters. As a gesture of goodwill, the village also takes the entire Feng family, Communist sympathizers who would surely be shot if left behind – and the patriarch Old Feng (Berry Kroeger) would surely turn them in. Doctor’s daughter Cathy Grainger (Lauren Bacall) helps organize the escape, but at the last minute decides not to go because her father hasn’t returned from an operation in Shanghai. 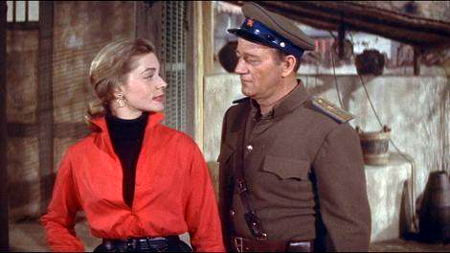 Blood Alley is not a distinguished picture in any respect, and it even has serious shortcomings as a thriller. William Wellman and his second unit directors work up some okay action scenes but it takes Wayne and Bacall’s star power to keep a truly poor script afloat. For an anti-Commie picture it’s not as onerous as Big Jim McClain, Wayne’s show about a two-fisted government agent uncovering a Red conspiracy in Hawaii. Elia Kazan’s least-loved but actually rather good Man on a Tightrope is a realistic take on the predicament of an Eastern-European circus owner, who plans to flee with his troupe across the frontier to better conditions in the West. Wayne and Wellman’s show is by comparison a silly cartoon with broad matinee appeal for the popcorn crowd.

Even Wayne has trouble with a script this klunky. His Captain Wilder talks to himself, and, as if praying, addresses optimistic sentiments to someone named ‘baby’. An entire opening episode is a lame escape from a Chinese prison that feels like a no-budget add-on, with dialogue that could be from a radio show. Wilder finds a gun hidden in his mattress and exclaims, “Hey, a gun!” The line, ‘no expense was spared’ doesn’t apply to this show. Batjac’s designer Alfred Ybarra constructs an impressive mockup of a castle on a hill, but when Wayne throws himself against the window of his solid stone jail cell, the entire wall flexes, very visibly.

Wayne is smartly shown in selected exteriors, walking down a path, on a dock, etc, but he’s mostly restricted to sets back in Hollywood. He probably spent what time he could on location but need to keep his production company back in Los Angeles busy too. Despite the fatheaded script Wayne’s Wilder is very likable; Wayne’s instinct on how to play himself was always well judged. He keeps it light, denying patriotic motives for Captain Wilder’s actions — resentment of the Commies is enough. Lauren Bacall also acquits herself well, adding some diverting comic touches. Her character works just fine until it’s time to get romantic, at which point everything goes as flat as a Republic Serial.

Because nothing is particularly sophisticated, we’re grateful for Blood Alley’s partial sensitivity toward its Asian characters. They’re played by Chinese- Americans, Japanese-Americans and Anglos in makeup, including a Swede and a Ukrainian. Bacall’s Cathy has a servant named Susu (Joy Kim) who does well with the stereotype, managing to make some annoying pidgin-English talk seem halfway benign (except for the damn haircut scene). Paul Fix’s ‘wise man’ character is on the dull side. Hulking Mike Mazurki provides excellent support as Captain Wilder’s first mate. His playing is not exaggerated, as opposed to his savage Chinese monster ten years later in John Ford’s 7 Women. Given name billing but seen only in a few arresting cutaways is Anita Ekberg, in heavy yellowface eye makeup as Wei Ling. Ekberg must have had a heck of an agent, as Wei Ling looks more like a Vulcan than a Chinese. Someone showed good taste and kept Ekberg’s figure under wraps; it would have been awful to make her into a rebel machine gunner and a curvaceous China Doll. 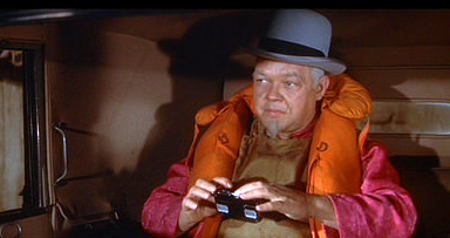 The show rounds up at least fifty Asian-American actors and extras, few of which have speaking parts. I suspect that the Chinese that are seen swimming en masse are stuntmen, or at least I hope they are. Wellman breaks up his coverage enough so the villagers are not entirely a faceless mass. The film’s attempt to separate good Chinese from bad Chinese is a flop. Berry Kroeger’s supposedly corrupt Commie acts more like a cartoon mandarin clown than anything else. He does things like polish his tire-challenged limousine, and then sits in the back looking at 3-D View-Master slides. A Chinese soldier takes time out to try to rape Cathy, giving Wayne an excuse to bayonet him. Wayne jabs this guy about five times, and much later fights a pair of assassins in the wheelhouse during a storm. Both incidents produce more visible blood than was common in 1955.

Batjac and Wayne would later enter stereotype purgatory with Pedro Gonzales-Gonzales, a Mexican-American who did a funny skittish Chihuahua-like character in pictures like Rio Bravo, and probably inspired the outright racist Speedy Gonzales cartoon. But here in Blood Alley we have a great turn from diminutive Japanese-American actor Henry Nakamura, who William Wellman used in several movies, most notably the excellent Westward the Women. Nakamura nails the role of Wayne’s boiler room engineer Tack, who knows San Francisco and has a cocky hipster attitude even better than ‘Number One Son’ in the Charlie Chan movies. Nakumura is refreshingly ‘American,’ and would have been a riot had he played opposite Robert Mitchum. We overlook the fact that surviving in a Mao-led China with Tack’s smart-aleck Yankee attitude seems pretty unlikely. 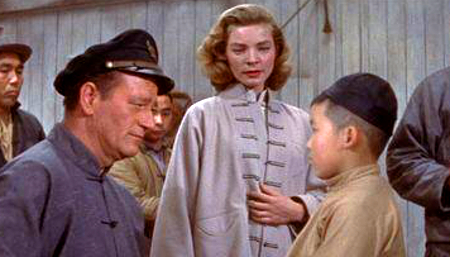 Wellman’s ‘cute’ relief with a little Chinese boy saluting Captain Wilder is not cloying in the least, but it will remind anti-Wayne types of the orphan singled out for paternal American affection in Wayne’s later The Green Berets. Of course, we do wonder how this bustling Chinese fishing village has only 180 residents . . . a number that might comprise just two or three extended families. Perhaps the Commies moved the rest to labor camps?

The escape plan for the paddleboat is pretty weak. They trick the Red patrol gunboat into ripping out its bottom, and mostly use fog to hide themselves. Then, two or three Red destroyers use at least twenty cannon shells but can’t seem to hit them. When the ferryboat is struck, instead of being blown to flinders the damage is limited to a couple of collapsed ceilings. Quite effective is a large wooden beam that partly wrecks the paddlewheel when they’re picking up firewood from a graveyard of abandoned ships. Lauren Bacall’s stunt woman’s race down a long line of wrecked boats (reportedly used to form a breakwater for a marina in S.F. Bay) isn’t exciting because we know darn well it’s not Lauren.

A last technical note is to scratch our heads at a wholly inept miniature tank shot meant to represent Hong Kong Harbor. A toy paddleboat putts past a toy English warship, and the only background is a colorless mass of lights on the horizon that look more like glowing oatmeal than a city, any city. By this point in the picture Wayne’s captain hasn’t left that wheelhouse or the main passenger deck for half an hour. Some big explosions and a hide-in-the-tules scene reminiscent of The African Queen don’t save Blood Alley from looking cheaper than it should.

The Warner Archive Collection Blu-ray of Blood Alley is a great transfer of this matinee favorite (for many). Don’t judge the disc quality by the stills in this review. The Warnercolor image looks fine. Hues no longer have the old Warnercolor rust tinge, and William Clothier makes good use of fog filters. However they managed it on location, the fog generated works quite well in many shots. Now working for more studios than just RKO, Roy Webb provides a workable, punchy music score that doesn’t belabor the obvious. It’s also free of rinky tink faux-Chinee themes. I assume that Susu’s Chinese song is traditional.

This is the first time I’ve seen the whole picture, because old Pan-scan TV transfers were so horrible . . . I always walked in on the scene where Captain Wilder was making a Davy Crockett- like speech to his appreciative passengers, and turned up my film-student nose at the whole thing. In the whole vast scheme of things (to quote George Bailey) Blood Alley is fairly harmless — it’s just too obvious to offend.

Which leaves me with one more film observation — Wayne, Bacall and Kroeger shout out quite a bit of Chinese . . . it would be fun to learn whether any of it is any good!

The WAC throws in some interesting extras. Gig Young appears with John Wayne for some extended promo bits on the B&W Warner Bros. Presents TV show, going over a fanciful version of Wayne’s career. Did he really sell ice cream from a cart, as a ‘poor boy’ whose father OWNED A DAIRY? We see some good BTS footage of location shooting. Although originally shown on TV, the clips are presented widescreen. Three newsreel clips gather snippets of Wayne doing a great job at a couple of Hollywood award ceremonies. Believe me, in person his warmth really filled a room. Other newsreel clips see Wayne appearing for the American Legion (less said the better) and making a speech for an organization called Crusade for Freedom. I don’t recognize the man who seems to be in charge, but his face is familiar. Much better is the gum-chewing police chief on the dais behind Wayne as he speaks. The Crusade raised awareness of and additional funds for Radio Free Europe.