Forget the proletarian messages, this Italian Neorealist classic is really an exploitation film about ogling brazen, buxom babes in short-shorts, up to their knees in a rice paddy. Hollywood actress Doris Dowling is the nominal star but new discovery Silvana Mangano became the knockout dream of every Italian male suffering from postwar shortages (cough). Giuseppe De Santis delivered the perfect combo — an art film that pulled in every lonely guy nella cittá. 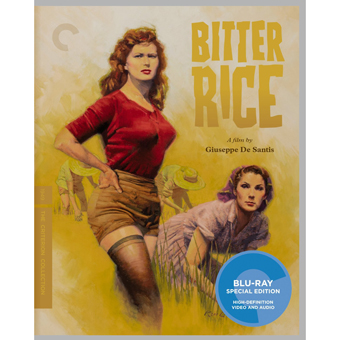 Way back in film school it was easy to get the notion that European filmmaking amounted to a number of great art-films imported to the United States. Only later did we discover that things in Europe were no different than they are here: many of the Italian Neorealist classics weren’t popular successes, and Italian producers were not in the habit of making movies only for the then- much smaller festival circuit. 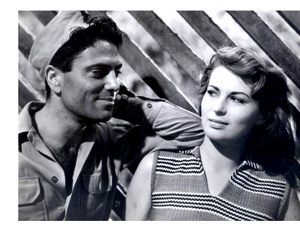 Bitter Rice is key picture for a number of reasons. It is a bona fide neorealist epic, given a heavy dose of socialist content by its director Giuseppe De Santis and its writer Carlo Lizzani. But it is also the breakthrough picture for the Roman bombshell Silvana Mangano, who brought to the screen a modern, earthy sexuality far removed from pre-war notions of gentility. When an amorous soldier presses his attentions, her character pushes him away, saying, “Not now, I have to want it,” implying that she might sleep with him later. Producer De Laurentiis knew a good thing when he saw it. He married Mangano before the film came out, a wise move indeed. Bitter Rice would be good without Mangano, but de Laurentiis and De Santis enlarged her role, giving audiences more of what they wanted.

The movie has seven credited writers, but Carlo Lizzani is usually cited as its core author. De Santis got the idea by observing hundreds of impoverished women boarding trains to go north to work the rice fields of northern provinces. One source of conflict is between the rice workers authorized by the union, and the desperate women who take the train hoping to be allowed to work anyway. Almost like pimps, sleazy promoters promise to use their influence to help them become official workers, for a cut of their pay. When the planting begins, a party of non-hired women joins the work in the flooded fields, hoping for a break.

Contracted laborer Silvana (Silvana Mangano) helps the unemployed Francesca (American import Doris Dowling) find a place on the work gangs, very aware that the woman is a fugitive, wanted with her boyfriend Walter (Vittorio Gassman), a thief who has stolen a valuable necklace. The clever Silvana lifts the necklace without Francesca knowing, but as they become closer friends she changes her mind. The women in the dormitories live a communal life and eventually adopt a group identity to make decisions. Observing from outside, and attracted to both Silvana and Francesca is Marco (Raf Vallone), a soldier due for discharge. Things becomes sticky when Walter returns to make trouble. He begins romancing Silvana in his off time. Wanted by the cops, he hides in the vast rice storage barn, where he concocts a selfish plan — he’ll organize the promoters to steal several truckloads of valuable rice, jeopardizing the work season for all of the women laborers. 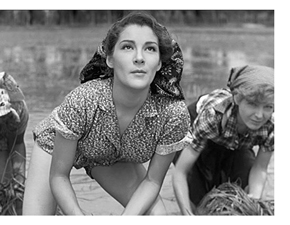 Giuseppe De Santis was a ‘committed’ director, which Mickey Knox defined for me as a director who put his politics first in his movies. Bitter Rice presents a communist point of view, examining the plight of women with little choice but to do backbreaking work away from the their families for the two-month rice season. The fight to decide who deserves to work, and whether the workers should show solidarity, is carried out in De Santis’ visual structure, as several scenes ‘build consensus’ with shots of individuals giving way to pairs and then groups, until the workers speak as a unified whole. When this works, it’s not a bad effect; by the end of the show the supporting cast do seem to represent an entire class of people looking for dignity. De Santis clearly likes women and sympathizes with their problems.

De Santis also knows what will bring in the audiences — female flesh. Although nowhere near as crass as last year’s Furious 7, with its montages of the bottoms of thong-clad models, this show definitely has a thing for female anatomy. Almost like a Women in Prison epic, the workers undress in the dormitory and fight like cats. Working hard to plant the rice in the flooded fields, they are a voyeur’s dream, bent over in tight shorts. Ms. Dowling, formerly glamorous and urbane in The Lost Weekend and The Blue Dahlia, goes full-neoreal for this show, up to her knees in muddy water. Her bare legs are sleek and unblemished, even in the mud. 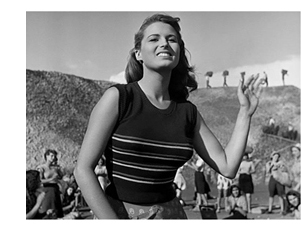 But the queen of the paddies is Silvana, who comes off as feminine but very, very much an Italian’s idea of a dream girl, full-figured and possessed of legs like torpedoes. Silvana’s Silvana is nobody’s fool, seeing through Francesca in a minute, and keeping the lusty Marco at bay. She’s attracted to the shifty Walter even as she sees what a heel he is. To be crude, making out isn’t the same as putting out, and this Silvana keeps her dignity intact, up to a point.

Mangano distinguished herself from contemporary beauties turned actresses Lucia Bosé, Eleanora Rossi Drago, Gianna Maria Canale and Gina Lollobrigida. Besides making grown men weak at the knees, she had a special talent for dance. De Santis arranges to give Mangano at least three showcase scenes, solo dances to entertain her fellow workers. She’s so good that the scenes work 100%. Mangano does American dance moves and mambo-like steps in a style all her own. She’s sexy but too classy to be a cabaret dancer, even as she caresses herself and tosses her body every which way. Probably considered way too heavy for modern taste, she’s nevertheless an entirely graceful knockout, completely in charge of her image and appeal. They talk about women empowered through sex; Silvana Mangano is the real deal.

One more thing — when foreign art imports became more prominent later in the 1950s, they were always described a ‘earthy,’ when the writers probably meant ‘dirty’ — postwar European art films showed peasant life as it was, without Hollywood designers and makeup artists. Women had tousled hair and shiny faces, and everybody perspired. The women of Bitter Rice are pretty and plain but they have all the glamor of a barracks. Silvana is of course a knockout, with her hair never really unattractive, but she clearly doesn’t use Arpege perfume or wear a Maidenform bra. I’m not sure she wears a bra at all. When released in New York in 1950, with a campaign stressing the sex angle, I can imagine a packed arthouse audience audibly gasping when Silvana raises her arms in her dance, revealing… unshaved armpits. Vulgar — or natural? 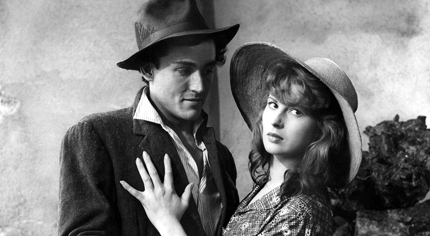 Want a sample of Mangano’s appeal away from the rice paddy? Check this clip of the Armando Trovajoli song ‘El negro Zumbón‘ from Anna, 1951. Note that Mangano already seems to have slimmed down considerably. She carries the nicely-shot (but abysmally edited) classic musical number with charm and class. The core of her style is pure body-pride. She seems at least a decade ahead of what American entertainers were doing. No wonder Italy became a style center for the ‘sixties.

Bitter Rice is a women’s picture with two of Italy’s most attractive, masculine actors. Rising star Vittorio Gassman is the slippery, attractive villain. He seduces both women with promises of material elegance but is a predictable rat through and through. Actor Gassman would work with Mangano several more times, and eventually try out a Hollywood career linked to a marriage to Shelley Winters. With his salt-of-the-earth rugged good looks, relative newcomer Raf Vallone made a big impression as well, as an everyman with integrity — and a healthy lust of his own. 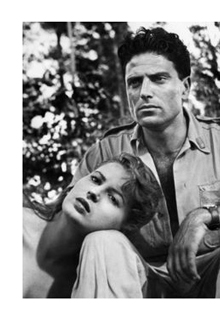 Director De Santis makes sure that his women are not passive. In the violent ending they’re the ones who must take action. The direction overall is almost too smooth to be neo-realist. The rough farm setting is important, but De Santis makes much use of the camera crane. His train station scene uses a long panning shot to place the viewer in the middle of a mass of people in motion; it’s every bit as epic-looking as Sergio Leone’s train stations in the later Duck You Sucker. The story of Silvana and Francesca becomes a little arbitrary at the end, but the dramatic climaxes work well enough. Neorealism grew in several directions in an attempt to stay relative; Bitter Rice can be described as a neorealist potboiler, with a chaser of erotic escapism.

The Criterion Collection’s Blu-ray of Bitter Rice looks terrific — somebody finally accessed original materials (a new restoration) to replace the unwatchable older prints. I can’t tell if this is any longer than what New Yorkers saw in 1950, but there are a couple of cuts in the girl-fight scenes that would seem highly censorable — not to mention a Silvana Mangano dance gesture or two that might have given the censor a conniption fit. The attractive B&W images surely make those rice field more pleasant than they were in real life. The audio is in fine shape; it includes some cues of what sound like real working songs. In a fine scene, the women make up lyrics to express their complaints, like the tobacco factory workers in the opera Carmen.

Pasquale Iannone’s insert essay nails the significance artistic and political of De Santis’ film. Writer Carlo Lizzani is seen in a 2002 interview, briefly sketching the main points about his collaboration with the director. The hour-long 2008 documentary Giuseppe De Santis comes from a weak video master, but it’s one of the better pieces on Italian film I’ve seen. The director’s career is entertwined with all the great names, many of whom appear to talk about his importance. The film clips include titles rarely screened, like Caccia tragica, Roma ore 11 and Under the Olive Tree show that the director’s commitment was no fake; he took only stories he thought were socially relevant, and when times changed more or less forfeited his career rather than compromise.

Being a culturally deprived American, I’ve always pronounced Mangano’s name ManGANo, but the trailer included gives it as MANgano. Live and learn.