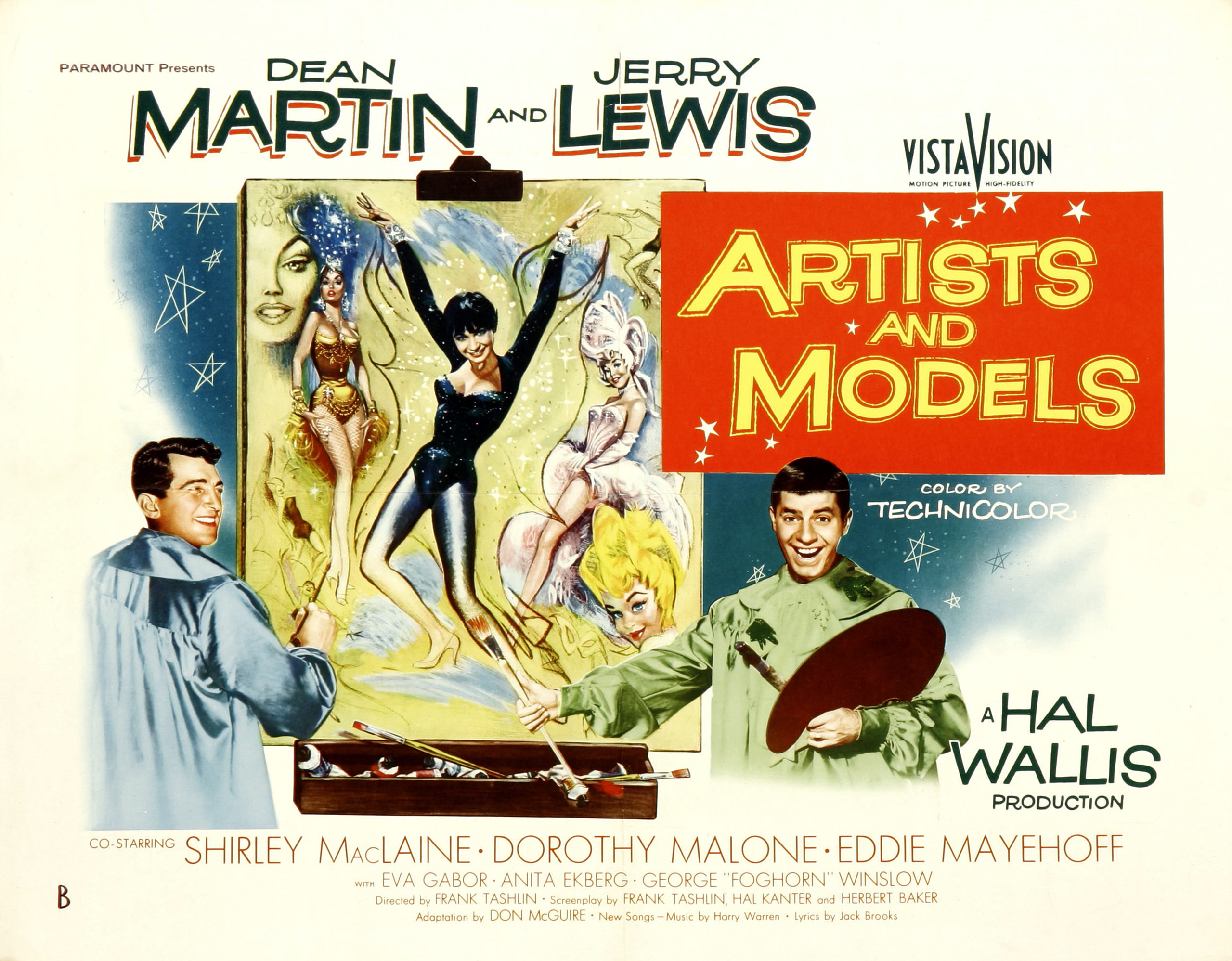 1955’s Artists and Models, directed by Frank Tashlin, neatly satirizes the cold-war paranoia of the fifties (and the McCarthy hearings in particular) by focusing on a similar witch hunt, the war against comic books.

Tashlin’s film, starring Dean Martin as a failed “fine” artist reduced to drawing for comic books and Jerry Lewis as the fella who reads them, has its basis in fact (more or less): future Mad publisher William Gaines actually appeared before a 1954 Senate subcommittee on juvenile delinquency where he defended his comics line including the politico’s favorite easy target, Tales from the Crypt.

Tashlin cut his teeth directing some of the more transgressive cartoons for Columbia and Warner Bros. so it’s no surprise he’s on the side of the angels (in this case Gaines),  blasting anything in sight with a pretentious bone in its body. In Artists and Models, fine art represents not enlightenment but rigorous repression, while a ten cent comic book speaks the Truth that will set us free.

Ravishing in its color thanks to veteran cinematographer, Daniel L. Fapp (who shot such disparate films as West Side Story and The Great Escape) and almost prenatal in its infantile humor, Artists and Models is the template for most of Jerry Lewis’ solo work in the sixties: the ultra-saturated palette and artfully puerile sight gags of The Ladies Man and The Nutty Professor would have been unthinkable without Tashlin’s influence.

If the humor in Artists and Models is infantile, its super-charged sexuality is the work of a director whose main inspiration was the moment when pre-pubescent became post; Tashlin makes his camera sit up and leer. And there’s a lot here to leer at, with Dorothy Malone, Anita Ekberg and scrumptious kewpie-doll Shirley MacLaine served up in frame after frame of killer pin-up shots.

All this, plus the wonderfully artificial studio evocations of the Manhattan boroughs make the film irresistible, that is until the final fifteen minutes, when a sub-plot involving Russians and rocket fuel is introduced. Combining cold-war anxiety with pop-culture escapism is an intriguing idea but here it feels like an afterthought, and it sends the film into a nosedive just when it should be making like Sputnik (it would be 38 years before this idea found the right launching pad in Joe Dante’s 1993 Matinee). Still, this is a film whose trespasses we forgive, thanks mainly to Frank Tashlin, whose heart and libido were always in the right place.

In a notion more bizarre than any of the plot turns of Artists and Models, the trailer for this seminal 50’s comedy is nowhere to be found. If you can help us track it down, please rush over to our Great Global Trailer Search page and sound the alarm!