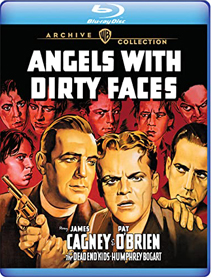 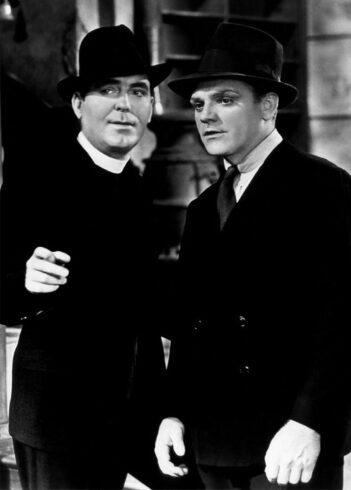 Released on a Thanksgiving weekend in 1938, Angels With Dirty Faces was a holiday treat with an unexpected punch; it could have been just another morality play dressed up in gangster drag but James Cagney’s powerhouse performance puts it in a class by itself. Cagney plays a rags-to-riches mobster named Rocky Sullivan, a charismatic cock of the walk who treats the tenement sidewalks like a Broadway stage. Long before his scandalous celebrity made headlines, Sullivan and best friend Jerry Connolly were teenaged partners in penny-ante crime until a botched train-yard robbery sealed their fates—Jerry escaped but the usually nimble Rocky was, for once, too slow. While Sullivan cooled his heels in reform school, Jerry went to church and stayed there—now a priest in the same parish that he and Rocky terrorized as youngsters, Connolly’s mission is to keep a new breed of troublemakers on the straight and narrow. 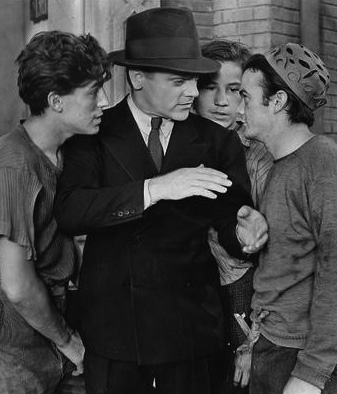 The clergyman’s current project is the reformation of a rowdy crew named Soapy, Swing, Bim, and Pasty—known to moviegoers as The Dead End Kids. Even if they weren’t immediately recognizable as the delinquents from William Wyler’s Dead End, the audience understands them at first sight; they’re all little Rockys in the making. The real Rocky, the trigger-happy killer with a movie star’s swagger, has just been released from prison and finds himself back on Dock Street where his pockets are immediately picked by the Kids—but the lifting of his wallet only endears the sticky-fingered hooligans to Rocky who sees something of himself in the little swindlers. Thanks to Father Connelly whispering in his ear, Rocky has ideas of reforming the gang and himself—but the devil on his shoulder wins again—for now. 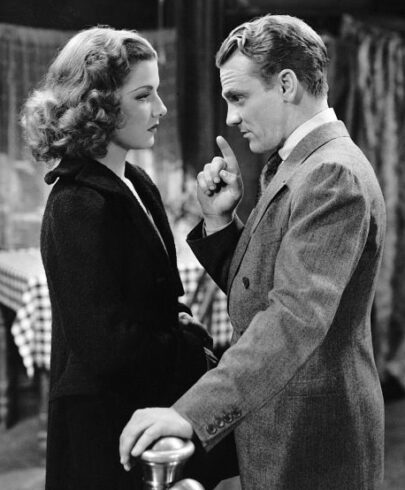 Though Michael Curtiz directed four other pictures that same year, Angels with Dirty Faces remains one of the most polished productions on his resume—the tenement set alone is a marvel, a phantasmagoria of crooked sidewalks, horse-drawn wagons, and clotheslines recalling one of Will Elder’s swarming street scenes for Mad comics. The production design is so rich it makes poverty seem glamorous—and if that bustling neighborhood suggests a Manhattan borough in miniature, Curtiz’s film is a microcosm of what we understand to be a “Warner Bros.” picture—Angels With Dirty Faces is an unofficial tribute to the studio’s storied history thanks to the presence of actors and craftsmen who made the studio what it was; Cagney, of course, and Pat O’Brien, Ann Sheridan, Humphrey Bogart, art director Robert Haas, composer Max Steiner, and cinematographer Sol Polito. 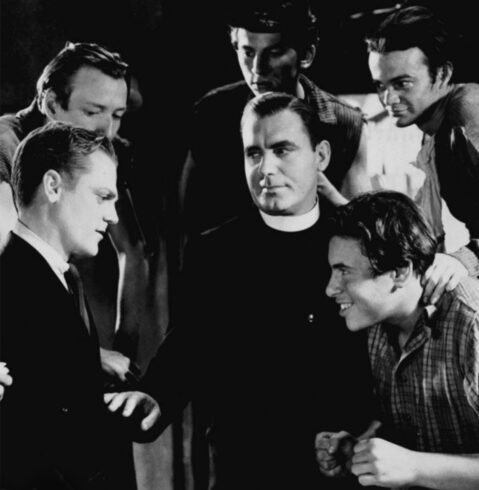 O’Brien gives Father Connolly an upright character while downplaying the usual sanctimony that comes with the turf (he even takes a sock at a condescending reporter)—it’s a welcome change for movie fans who bristle at O’Brien’s goonish demeanor in 1940’s Torrid Zone where he seemed perversely amused by abusing Sheridan. As Rocky’s slightly reluctant girlfriend, a volunteer social worker named Laury Martin, Sheridan inhabits the typical Sheridan role, beautiful but hard-boiled, tough-minded but open-hearted; the ideal Howard Hawks woman (she worked for Hawks only once, in I Was a Male War Bride). Bogart, with The Maltese Falcon just around the corner, has a glorified—if amusingly smarmy—cameo as Rocky’s groveling partner in crime, and Billy Halop, Gabriel Dell, Leo Gorcey, and Huntz Hall—the most vivid members of the Dead End Kids—are already honing an act that would serve them for decades as the Little Tough Guys, The East Side Kids, and finally, The Bowery Boys. 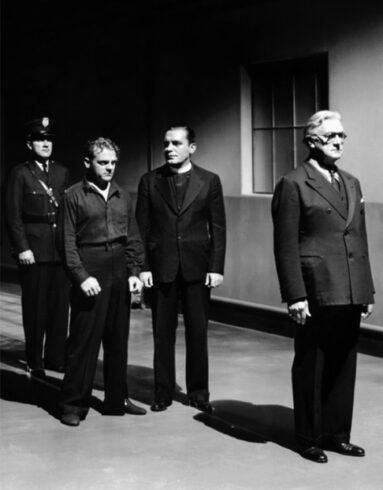 The ending of this film would not have half its power without Cagney’s kinetic performance—a wrenching bit of pantomime in silhouette staged in masterful fashion by Curtiz. Steiner’s grimly funereal score recalls his dirge for Kong’s final moments atop the Empire State—that portentous sound is no less heartbreaking accompanying Rocky’s own swan song. Cagney took credit for the scene’s controversial ambiguity (we see what we want to see) and Curtiz gets extra points for chutzpah; Cagney’s greatest performance takes place offscreen.

Warner Archives new Blu ray is a fine showcase for Polito’s lighting—his work has a neo-realist bent before switching to super-charged noir when the mood requires (Polito was nothing if not versatile, he photographed The Adventures of Robin Hood in storybook Technicolor that same year). The extras include another edition of Leonard Maltin’s Warner Night at the Movies 1938—it’s an enjoyable simulation of what typical movie goers could expect that year: a newsreel, a musical short, and a Looney Tunes cartoon.