Superb filmmaking! Edward Yang’s chronicle of the children of Chinese exiles in Taiwan follows one teen’s strange story of accidental delinquency, muted romance and pervasive violence in a closed society fed on American Rock ‘n’ Roll and Cold War militarism. Almost exactly as long as Gone With the Wind, Yang’s intimate epic is one of those ‘best movies ever’ that few Americans have heard of. 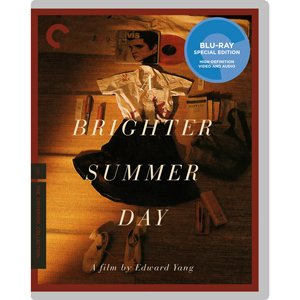 Back in 2011 Criterion gave us Edward Yang’s 2000 film Yi Yi; I can only say that it was unforgettable. The intimate but sprawling story of a Taiwanese family was almost three hours long yet did not drag out as do our Hollywood epics of that length. The experience was so good that I plunged undaunted into this new disc, the director’s 1991 A Brighter Summer Day. It’s almost four hours long, with no intermission. Day is considered Yang’s masterpiece, and after seeing it I would have to agree. 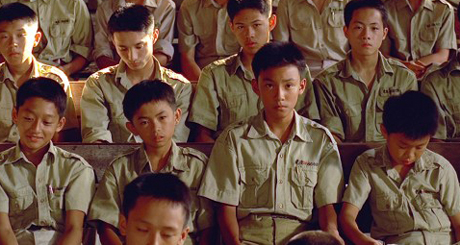 One marvelous thing about Criterion is its authoritative extras, which help us understand films made in foreign lands, in cultures that are more unfamiliar than we think they will be. Long a satellite military nation of the U.S., Taiwan (we once called it Formosa) was mostly ignored by our media for decades, except in its function as the home of what we decided was the lawful government of China. Edward Yang’s film has been classified as a coming of age story about the displaced Nationalist Chinese that moved to Taiwan after the 1949 revolution. Essayist Kent Jones describes the New Taiwan Cinema movement as centering on stories of urban life beset by rapid social development. That’s certainly what we have here. The scene in Taiwan seems very American in some ways, but other aspects are completely alien. The anglicized title has been derived from the lyrics of an Elvis Presley song. The literal translation of the original title Gu ling jie shao nian sha ren shi jian sounds like a line from a police blotter about the senseless killing of a teenage girl. Yet the crime theme is only one aspect of the picture.

It is 1959, and the first generation of Taiwanese that cannot remember life on the mainland is beginning to come of age. Xiao Si’r (Chang Chen) is a quiet, slightly smarter than average Taiwanese kid living under odd conditions. His family comes from a class of government workers so he’s considered well off. Yet his father is beset with worries, mostly about job security. To this end the father seeks favors from a slick insider, who says he can get him a promotion and see that his children get into the right schools. The pressure to succeed academically is so strong that students that qualify for special grad schools are announced on the radio. The high school is run under military discipline. It is so crowded that Xiao Si’r must attend night school, a fact that works against him as the less gifted students are forced to take that shift. He belongs to a gang of kids from his same class; the enemy gang is comprised of lower middle class kids. Xiao Si’r’s gang is disorganized because its leader, ‘Honey,’ (Hung-Ming Lin) is absent, hiding out from the police. Xiao Si’r becomes interested in Honey’s putative girlfriend, Ming (Lisa Yang), a mysterious charmer with excellent manners, yet who becomes the focus of more than one rivalry. 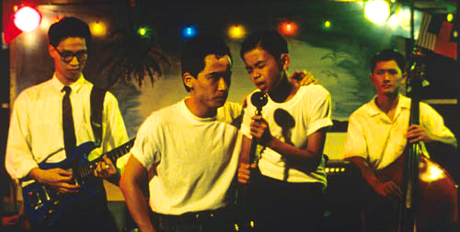 The kids are into American movies (we hear audio snippets of Rio Bravo) and as committed to Yankee Rock ‘n’ Roll as were kids in the States. A smaller kid named Cat (Wang Quizan) uses his high voice to good effect for rock novelty songs, while one of the leaders of Xiao Si’r’s gang wants to be a big performer. The problem is that adult criminal gangs are involved, and an agent sees to it that the aspiring singer runs up a gambling debt. Xiao Si’r continues to see Ming, which causes friction when Honey returns to claim what’s his. Xiao Si’r continues to get into trouble with the school officials, often simply for refusing to snitch. But he proves capable of violence on his own, as when he turns the tables on some thugs that think he will be easy prey. His parents somewhat unreasonably keep insisting that Xiao Si’r be given the benefit of the doubt, even when the school officials want to expel him. Meanwhile, Xiao Si’r’s father gets an unwelcome surprise. His shady benefactor has been found out, and the father is put under arrest and forced to cooperate with a corruption investigation. The passive-aggressive inquisitor forces him to make an unending series of personal confessions, in search of ‘the truth.’

The upscale Taiwanese have moved into housing abandoned fifteen years ago by the Japanese occupiers. It seems to have been the habit for Japanese officers to hide their traditional weapons in the attics. When the kids find out about this they suddenly enjoy a bounty of impressive, deadly weaoons. It’s rather unsettling to see 13 year-olds bringing knives and full-length katana swords to school. Honey’s return disturbs the adult gang scene, and Xiao Si’r ends up witnessing a midnight massacre committed under cover of a typhoon. Later events take Xiao Si’r to day school and separate him from Ming. Nobody realizes how fully committed Xiao Si’r is to his view of life as a battle. When he discovers that Ming may have ‘cheated’ on him by befriending another boy, Xiao Si’r becomes quietly unhinged.

This ragged synopsis doesn’t cover half the content of A Brighter Summer Day nor can it communicate the depth and detail of Edward Yang’s accomplishment. Once we get a few names and faces straight these people seem entirely real; the dated dramatic fantasies and theatrical-psychological hoo-haw of West Side Story and Rebel without a Cause are left far behind. Yang used several members of one family to play real family members; it’s interesting to see Xiao Si’r almost get punished for the wrongdoing of an older brother. All the boys have gang names: ‘Airplane,’ ‘Bomber,’ ‘Tiger,’ ‘Underpants,’ ‘Deuce.’ Home life and gang life are kept entirely separate, and Xiao Si’r’s parents haven’t a clue as to how potentially dangerous it is for their son. The same goes for the lazy school personnel. It’s every kid for himself, and Xiao Si’r does very well considering the circumstances. Until, of course, something goes irretrievably wrong.

Edward Yang’s style is absorbing; his film is a pleasure to watch. The sets seem too real to be sets, and the performances pull us into the lives of these Chinese punks and their hybrid-American hooliganism. Their versions of Elvis songs aren’t bad. Ming is the kind of girl a kid could lose his head over.

Yang makes use of many sidebar stories, each given just enough emphasis to suggest a wide range of social interactions. A shopkeeper loses his patience with Xiao Si’r’s family, and starts a fight with them. But when the man later collapses in a ditch with a heart attack, Xiao Si’r finds aid for him, and earns for his family a fast friend. It isn’t like Yang begs us to identify with Xiao Si’r, and nobody in this film is particularly cute or adorable, like the little kid in Yi Yi. But we care just the same, and the desire to see how it turns out is intense. A Brighter Summer Day doesn’t follow a standard dramatic pattern, and neither does it have a short story feel, or a nostalgic bent. It simply says ‘this is how it was,’ and since it’s all a new experience for us, we’re pulled in. 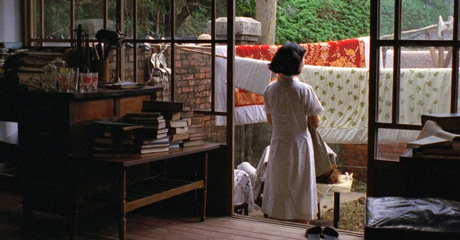 The Criterion Collection’s Blu-ray of A Brighter Summer Day will be a welcome release for fans aware of this great filmmaker. We’re told that the show finally received a real U.S. release in 2011, four years after Edward Yang passed away. It’s fully restored in 4K and looks terrific, with rich colors and no flaws. I don’t remember an original score but we do hear quite a bit of source music; one running gag concerns a bedside radio that only works intermittently, that everybody feels free to comment about.

A second Blu-ray disc contains a long documentary about the New Taiwan Cinema movement with input from other filmmakers as well. Actor Chang Cheng appears in a new interview, while a special extra is an entire videotaped performance of Edward Wang’s stage play Likely Consequence.

It was apparently Martin Scorsese that promoted the 2011 restoration. This seems particularly appropriate, as A Brighter Summer Day is a personal cultural statement, just like Scorsese’s own Mean Streets.