A truly fascinating rarity from the U.S.S.R., Karen Shahknazarov’s wickedly droll satire proves that the country Reagan called an ‘Evil Empire’ was radically changing in the late 1980s. Half Kafka paranoia and partly a Valentine to American freedoms, it takes the psychological temperature of a society that just plain no longer functions. Leonid Filatov’s unflappable engineer arrives in a rural Russian town and might as well be a Soviet Alice dropped down a rabbit hole — things get crazier and crazier, and nobody wants to let him in on the cosmic joke. The weird tale’s strength is its visual creativity, but it also generates an unexpected affection for its characters, nice people caught in a frustrating system. That dialogue retort in Jean-Luc Godard’s science fiction classic comes to mind early on in Zerograd, a highly amusing social satire of the kind we thought impossible in the Soviet Union — director Karen Shakhnazarov and his writer depict the U.S.S.R. as a non-functioning country, crippled by bureaucratic politics and mired in the political quicksand of faked history. The movie isn’t about military threats or high-level conspiracies, and it doesn’t wave the flag of ‘Glasnost’ or ‘Perestroika.’  It’s instead a strange little satire, a fable from the Theater of the Absurd. 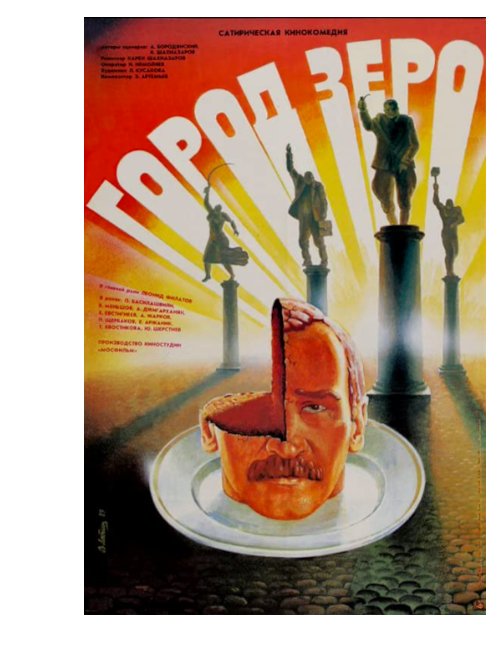 Although it warms up considerably, Zerograd is yet another Eastern-bloc comedy that elicits nervous reactions, not big laughs. We’re so accustomed to associating images of fog and gloom with thriller-movie menace, that we initially await the arrival of ruthless KGB assassins. Only after several ‘impossible’ events do we realize that Shakhnazarov has a different agenda, one that’s really quite humanitarian.

Civil engineer Aleksei Varakin (Leonid Filatov) steps off the train from Moscow in a relatively isolated town. He’s carrying some technical updates for an air conditioning plant. He never gets anywhere near the plant or begins to get his mission done, as he’s in a figurative ‘Zerograd’ — a town frozen in political and bureaucratic molasses.

At first we fear that Aleksei is in some kind of conspiratorial trap. The engineer he’s meant to contact isn’t available — and the solution of a plant manager is to just wait a couple of weeks. Isn’t the product important?  It reminds us of an old National Lampoon satire about a Russian airplane manufactured with a giant, absurd zig-zag in its fuselage, because the blueprints got creased and nobody in the factor was willing to fess up to the error. This plant manager elects to Wait and Do Nothing as an automatic default setting. He’s non-committal to a degree not seen outside of Lewis Carroll.

Aleksei already knows that he’s not in Kansas-stan anymore. That’s established right away when the plant manager’s secretary is going about her business in the reception area totally nude. Conditioned to Get Along and not Ruffle Feathers in this broken society, Aleksei makes an effort not to react. It’s borderline hilarious, the way he hides his astonishment, maintaining a poker face. When Aleksei finally speaks up about the naked receptionist, the plant manager acts as if he hadn’t noticed. Pointing out problems in ‘Zerograd’ is apparently something that’s not done, if you know what’s good for you. 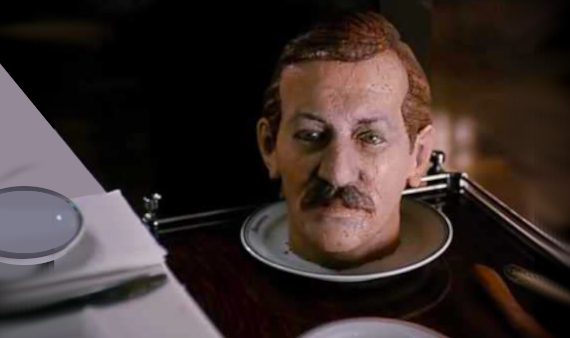 It gets even weirder, right away. Aleksei arrived in the pre-dawn hours, so has hardly seen anyone. At a restaurant he’s witness to events as crazy as anything in The Cabinet of Dr. Caligari. He’s served a cake that he didn’t ask for, which is an exact replica of his own head. When he nervously declines to eat a slice, something violent happens.

Much of the balance of the narrative sees Aleksei prevented from making progress — or even getting a chance to rest — by more officials and individuals that insist he accompany them somewhere. The first is the town prosecutor. Aleksei finds himself a suspect in the theorized murder of a man who committed suicide in the restaurant. With a straight face, the prosecutor ignores accounts of what really happened. He presumes that the dead man is Aleksei’s father, and proceeds to spin an outrageous theory that makes the man a victim of conspirators. Aleksei’s eyewitness testimony is ignored; he’s instead asked for his comments on the prosecutor’s theories.

It’s an insight into  the bureaucratic mindset. Just as with the plant manager, the prosecutor can’t afford to be perceived as making a mistake. It’s much safer to leave the whole issue unresolved, in flux, with Aleksei a ‘maybe’ suspect. I should think this is the filmmakers’ way of depicting Soviet Society at a standstill. . . those in positions of authority spend all their time protecting their tail.

In Western stories of this kind, and even in Kafka’s The Trial, the traumatized main character constantly protests what they see as persecution. ‘K’ in The Trial whines so much that we begin to believe that his obstinacy is the main problem, not the society around him. More typical is the stance of police Sergeant Howie in Anthony Shaffer’s The Wicker Man, who leads so strongly with his self-image of authority that he’s easy prey for a conspiratorial ambush. But Zeroville has no malign conspiracy — what’s out of whack is the whole system.

Aleksei Varakin is a Soviet Everyman well-practiced in not reacting to provocations. Confronted with this madness, he maintains an even strain. We keep waiting for him to scream “Is Everybody Crazy!?” but he instead quietly hides his emotions. It’s a great performance — we can read Alexei’s suppressed hysteria.

Aleksei is shuttled around town by confused taxi drivers and an attractive but unexplained woman who takes him to see a local writer-in-exile (?). The man also presumes that Aleksei is the suicide’s lost son, and therefore something of a celebrity: back in 1957, the dead man was the first in Zerograd to dance rock’n’roll. The authorities came down hard on both of the dancers, causing a local tragedy. Thirty years later, the town now has a strong rock’n’roll following, and Aleksei is asked to attend a meeting-dance. The disapproving prosecutor also attends the town’s one expression of FREEDOM. It’s the only time we see anybody having a great time, dancing to the music of Elvis Presley and Bill Haley and the Comets. Most of the locals aren’t that great but they FEEL the joy of Rock around the Clock. It’s liberating.

What a shock is to see this level of social criticism from a Soviet film, even one filmed during the liberalization period overseen by Mikhail Gorbachev. Director Karen Shakhnazarov was reportedly at one time the head of Mosfilm; perhaps it took someone with his clout to get a show like this made.

The other major set-piece takes place when Aleksei is invited for a private tour of an underground museum of Russian history. A museum director shows him ornate, beautifully arranged wax figure displays of ‘famous events.’ All of them seem skewed or invented to serve a revisionist reading of history — just enough to suggest that local heroes had important roles, etc.. The fact that the museum is underground would seem a giveaway. And what is such a world-class exhibition doing in this backwater burg ‘gorod?’

Production-wise Zerograd delivers excellent filmmaking, especially his control of specific moods. The ‘museum’ is a major undertaking of art direction and costuming — all the wax figures are live actors holding still. They’re beautifully composed but the fact that we’re not fooled is a plus: at this point we’ve barely seen any people in  Zerograd,  and we almost wonder if the locals have all been petrified to serve as historical mannequins. Figuratively, they have. They’ve constructed a fraudulent history, and now they’re trapped in it.

The finale is quite pleasing. Most of the cast gathers in a little hotel room — a mother and grandson with a gift for Aleksei, the mayor, the prosecutor and the plant manager. Three cheeful women bring a small pot of dumplings and a single bottle of beer. All seem desperate for human company. It doesn’t matter that there are no plates, glasses, or chairs for all — they sing as Russians like to do. Director Shakhnazarov films scenes like this in one take, from one well chosen angle, adding to the film’s overall feeling of dreamlike stasis.

Aleksei is somehow at peace with the sheer insanity of his situation — he sings as well, and from the heart. These are his people, after all. Zerograd is a different, surprising and strangely heartwarming take on the Kafka-esque black comedy. Is poor Alexei hoping he’ll suddenly wake up?  Or does he appreciate this little microcosm of Soviet entropy as much as we do? 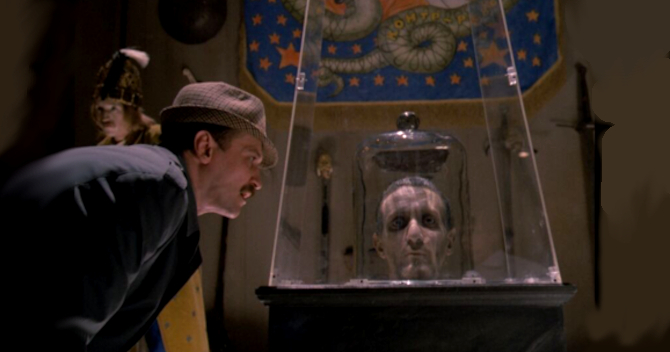 The Blu-ray of Zerograd is yet another Deaf Crocodile release that presents something unexpected and original, in excellent quality. The new 2K restoration was remastered by Mosfilm from the original 35mm picture and sound elements. It’s a Region A disc, made for American Blu-ray players.

The trusted critic Samm Deighan dispenses an informative and lively audio commentary — she has the background on the major players, and tells us when an actor also directed a well-known feature. Deaf Crocodile chief Dennis Bartok then appears in a new Zoom interview with director Shakhnazarov, using an interpreter to bring out the man’s life story and career ups and downs. When Bartok asks if Shakhnazarov had a personal interest in rock’n’roll, the director enthusiastically recalls the band Creedence Clearwater Revival!  This first-hand testimony is a serious bit of Russian film history.

Chris D. provides the text essay for an insert foldout. Once again, Deaf Crocodile premieres an impressive film that otherwise might have remained totally obscure here.