Epics — everybody wants to make them but the studios are naturally wary. Richard Attenborough’s ode to the youthful ambitions of Sir Winston Churchill was a big hit in England but didn’t make a dent here. Although a dead ringer for the young Winston, Simon Ward didn’t take off as a star either, leaving Anne Bancroft and Robert Shaw in a sidebar drama that will mostly be remembered for an STD. Correspondent-soldier Churchill sees action in India, The Sudan and South Africa, thanks to the intervention of his socially adept mother. It’s a beautiful, ‘safe’ production with plenty of national pride. Its American premiere served as the Grand opening screening for the second FILMEX film festival. 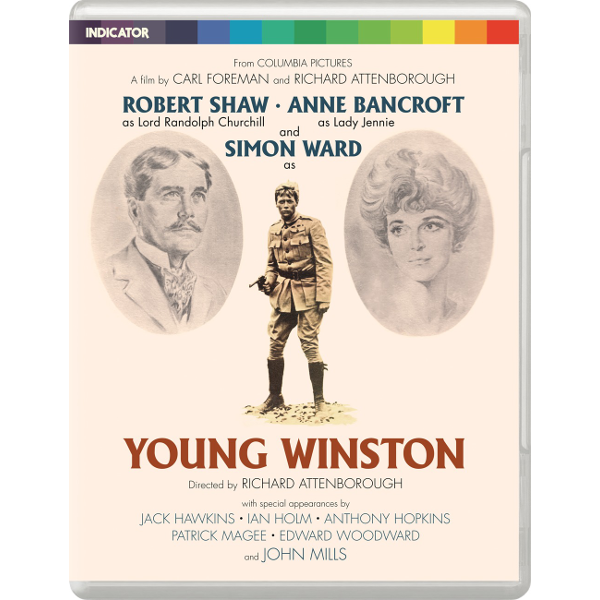 The very good actor Attenborough became a director with 1969’s Oh! What a Lovely War, which we’re told made money in the U.K. but was all but abandoned by Paramount Pictures in the U.S.. Attenborough the director used his impressive connections to enlist practically every breathing actor in England from Laurence Olivier on down, beginning a tradition that all but equated his movies with National Pride: at a time when the Brit film industry was in a financial tailspin, Attenborough’s movies stood firm against the decline.

It is said that the Young Winston was initiated years before, when the retired M.P. told writer-producer Carl Foreman that his autobio My Early Life: A Roving Commission ought to be made into a movie. The resulting film is an ambitious project that spans Churchill’s life from grade school until his successful entrance into politics. It’s told in an interesting order, taking a break to cover young Winston’s unpromising first years in boarding schools. Even as it admits less-than-exemplary things about his parents, the final words of every chapter endorse the future Great Man who will pull England through its darkest hour. Winston Churchill succeeds because he has an unstoppable faith in his country, his privileged position, and himself.

With locations ranging from Wales to North Africa, Attenborough and Foreman give the show an epic canvas. We first meet Winston (Simon Ward) as a young 2nd Lieutenant and war correspondent in India, a green careerist desperate to get attention. Despite riding an ostentatious white horse and volunteering to leap into dangerous situations, Winston escapes a bloody counter-attack. He makes enemies of the Army brass by writing up his adventures for the London readers. When he criticizes the campaign and cheerfully offers up advice for his superiors, he earns the ire of General Kitchener (John Mills), making his future in the military doubtful at best. 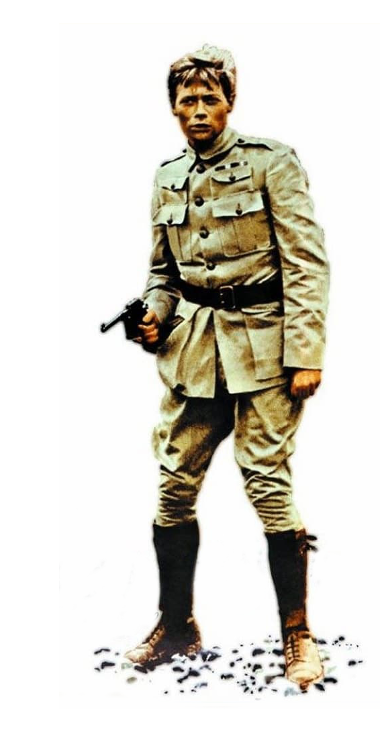 It’s good that Winston has such backing at home. His American-born mother Lady Randolph (Anne Bancroft) repeatedly secures opportunities for him both military and political. His father Lord Randolph (Robert Shaw) is an influential statesman beginning to lose his grip on political power. Randolph eventually succumbs to syphilis, as depicted in a scene where he can no longer think and speak on his feet in Parliament. Later on, the widowed Lady Randolph loses her money to a swindler. Her political and social savvy apparently keeps her solvent and socially acceptable. It sounds as if the story of Lady Randolph would be just as inspiring as that of her famous son.

The school flashbacks, with the frightened boy torn from his beloved Nanny and the mother he worships, set up Winston-the-Author’s thesis that he strived to succeed in an effort to impress his disapproving father. He continues to idolize his parents even when they don’t visit him in school. He works hard but doesn’t get good grades, which earns him more dismissals from his famous father.

The ‘How to Succeed in Upper-Class Fame and Glory’ story then shows our aspirant again entering the Army, partly to support his mother, and to keep trying to establish thea background of military achievement he deems necessary for a go at politics. With General Kitchener against him all the way, Winston returns to make an unsuccessful run for a seat in Parliament.

His mother helps him obtain a third commission (!) to South Africa. This time around his duty is no lark, but a grueling ordeal that he overcomes through daring and resourcefulness. He immediately alienates his superiors, as usual, and is captured by Boers while defending a troop train. He and his best friend Aylmer Haldane (Edward Woodward) then join in an escape from a P.O.W. camp; Winston lucks out by falling into the hands of a pro-British miner who hides him long enough to escape to to British territory. Aided by the newspapers’ enthusiastic accounts of his exploits, Winston finally wins his Parliamentary seat. The former mediocre orator surprises everyone with an unexpectedly rousing speech — the Winston Churchill that history remembers has finally been formed.

Young Winston is a perfectly respectable entertainment, a light history lesson handsomely produced. If it never comes fully to life, it’s because we simply watch while Attenborough and Foreman politely turn the pages on a very large storybook, and carefully underline each chapter lesson for us. We definitely see how Winston got the drive and gumption to persevere through various setbacks. Even if family pride and influence paves the way for him, he couldn’t have succeeded without facing up to some very difficult problems on his own. Once he overcomes a speech impediment and his genreral self-doubt, Winston comes off as a self-made man — whose mother’s influence keeps his career from being stopped in its tracks at least three times.

TV star Simon Ward was known in the U.S. only by horror fans, for his role in a Hammer Frankenstein movie. He makes a formidable Winston Churchill, even though it’s difficult to imagine the lean Ward fattening out to become the man in the WW2 newsreels. Attenborough uses the actor well, even though the material is basically undemanding: Winston’s suitability for greatness is never even questioned.

Every name actor in the long list of stars serves their function, from John Mills’ furious Kitchener to Jack Hawkins, whose lost voice was dubbed by Charles Gray. Robert Shaw stays firmly in character as the principled Lord Randolf, once again not doing things so that the audience will warm up to him. The second biggest impression is made by Anne Bancroft, who on a basic level remains the ‘mysterious fairy princess’ that Winston so admires. Bancroft is so charming, she makes rampant political favoritism seem benign. 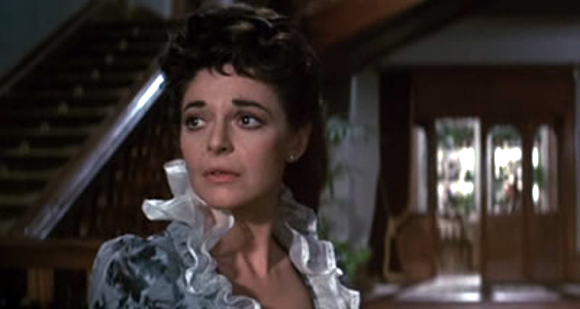 Unlike the playful Oh! What a Lovely War, Young Winston falls into the sober, respectable, mainstream style of Attenborough’s later A Bridge Too Far, Gandhi and Cry Freedom. His movies about political figures tend to be oversimplified, and his war movie forgets to tell us exactly why ‘Operation Market Garden’ became a failure. The one break from standard style continuity is to frame a couple of scenes with Winston and his mother as interviews. The journalist poses questions from off-screen as might a newspaperman. The ‘interviewee’ responses are edited with jump cuts, as if they were being featured on 60 Minutes. I’m not sure that these scenes do what Attenborough wants them to do — we don’t feel any closer to the characters. I don’t know about his mother, but Churchill was strongly noted for NOT offering his candid thoughts to anyone — his public persona was reportedly very carefully managed.

I found Young Winston to be a fun experience, for its general intelligence and good action scenes. Everything we see had to be produced and staged — There’s no substitute for BIG moviemaking. Who still outfits entire units of costumed, mounted cavalry for the movies anymore?   You’ll have to look out for scenes with Jane Seymour and Anthony Hopkins. Romance fans can skip this one — Winston meets the love of his life (Pippa Steel of The Vampire Lovers) just as the film is finishing.

I also liked it more than either of the WW2 Churchill movies made in 2017… Gary Oldman and Brian Cox were both excellent, but both stories seemed superficial and forced. The most interesting, in-depth Churchill I’ve seen is John Lithgow’s deft impersonation in the TV series The Crown. 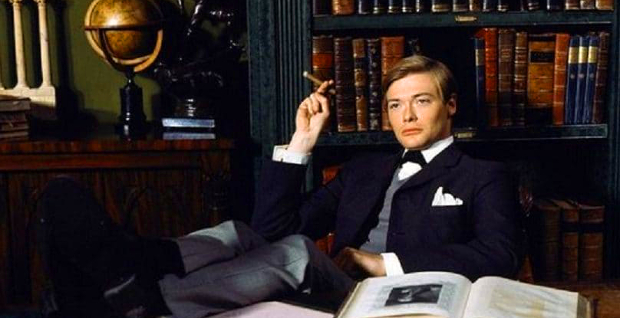 Powerhouse Indicator’s Blu-ray of Young Winston is the expected handsome HD encoding of this beautifully-produced movie. Attenborough definitely went in for precise elegance in his visuals, and that aspect is retained. The 154-minute running time is three minutes short of its reported original length; for general release in the U.S. Columbia it was hacked down by a full half-hour, to 124 minutes. Columbia must have thought shows needed to be no more than two hours long to keep exhibitors happy: this is the exact same chop-job the studio performed on a certain western epic seven years before. The movie begins with a 3.5 minute overture with the Alfred Ralston music score, followed by a long extended Maurice Binder title sequence. It uses animated photos and newsreel film to give an overview of Churchill’s life.

The show used Gerry Turpin’s proprietary process called the Turpin Colorflex System with the aim of achieving a ‘period’ look. It’s described as an alternative to ‘pre-flashing’ film. Judging from Sony’s transfer, I’d say that the process desaturates some colors without losing natural skin tones, avoiding a candy-color look seen in Turpin and Attenborough’s previous picture.

The extras combine new material and Richard Attenborough’s interview input from 2006; all are listed below. The deleted roadshow scenes include an excised alternate ending, in which an elderly Churchill fantasizes one more conversation with his disapproving father.

The U.S. Premiere footage is what I hoped it would be — uncut newsfilm shot at the 2nd FILMEX movie festival at Grauman’s Chinese, for which Young Winston was the ‘grand’ opener. We see Attenborough, Foreman, Shaw, Ward and attendees Rosalind Russell, Edward G. Robinson. Some of it is overexposed, and it doesn’t look as if Columbia did anything with it. Is the lady attending with Attenborough his wife Sheila Sim, the one-time star of Michael Powell’s A Canterbury Tale?  The Chinese still has its ticket booth at this time. I was an usher for a bunch of nights at Filmex 2 … it’s where I first saw Solaris, The Harder They Fall (I think I witnessed Roger Corman making the deal for New World, right after the screening) and The Discreet Charm of the Bourgeoisie, with Luis Buñuel in attendance. National General Theaters paid me for mostly dawdling around the auditorium in an ill-fitting money suit.