Viewers looking (desperately) for American leaders to admire can’t do better than to reflect on John Ford’s folksy, at least partly authentic honorarium to one of the greats. Henry Fonda is 100% dead-on as a vision of Abe Lincoln to bring tears to our eyes. Imagine . . . there’s such a thing as political integrity, or simply a person that puts the public good ahead of personal advantage. Criterion’s older extras are augmented with a fine new feature commentary by John Ford authority Joseph McBride. 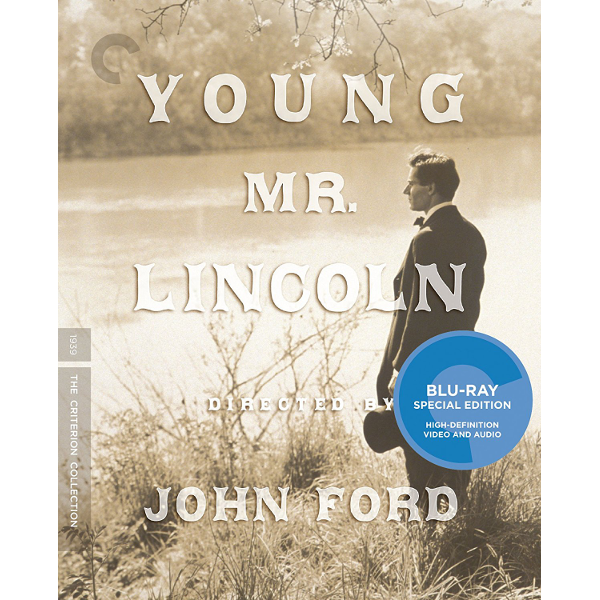 John Ford’s output for 1938 was Submarine Patrol and Four Men and a Prayer, films that don’t show up in career highlight roundups. But in one year he turned out Stagecoach for United Artists, Drums Along the Mohawk and this near-perfect film for Fox. Although interrupted by the war, Ford’s mid-career boom years began in earnest.

Young Mr. Lincoln is one of Hollywood’s most entertaining historical biopics. The sub-genre frequently ignores historical facts. When at all possible Hollywood turned any ‘great man’ who wore a uniform into an action hero. Musical greats were frequently relieved of their colorful lifestyles in order to produce family entertainment. Darryl Zanuck’s presidential biopic whitewash Wilson pleased no one, being overlong and dull to boot. Ford and writer Lamar Trotti may fudge a historical fact or two and their folksy version of Honest Abe is likely an exaggeration. But Young Mr. Lincoln honors a great president by not placing him on an impossibly high pedestal. Preaching humility, it encourages us to consider that men fated to become statues and quotations can start out like anyone else. Young Lincoln doubts that he’ll ever amount to anything.

Illinois store clerk Abe Lincoln takes up reading law books. After the loss of a local woman he loves, he eventually moves to Springfield and hangs out a shingle in partnership with another attorney. He occasionally sees Mary Todd (Marjorie Weaver) and Stephen Douglas (Milburn Stone), but seems to spend most of his time wondering what he’ll do with his life. A stabbing takes place at a town celebration. Abe prevents a lynching and then takes up the defense. But the case against two brothers seems to be open-and-shut, and Lincoln doesn’t pretend to have sure-fire way of getting them off.

The first delightful thing about Young Mr. Lincoln is that it doesn’t deal with the man’s legacy or any of the big chapters in his life, neither tragedies nor triumphs. It instead looks at what could be called the future president’s formative years. Abe gravitates toward the law as a career, seemingly after a self-taught session with a book found in the back of a settler’s wagon. Future wife Mary Todd and future competitor Stephen Douglas hover in the background while the gangly, slow talking Lincoln doesn’t betray any particularly brilliant visions of his own future. As in the best of Ford’s ‘bright hopes’ historical pictures, America seems so sparsely populated that the folks one knows have to be the same ones that build the nation — who else is there?

The second winning hand is Henry Fonda’s Abe, as envisioned by writer Lamar Trotti. Fonda looks and acts like an uprooted weed that doesn’t know where it should be growing. He jokes constantly about his shortcomings, admitting that he doesn’t know enough about the law to get into too much trouble. He’s friendly but awkward, and doesn’t mix well socially. We wonder if he’s self-conscious of the fact that he was raised literally in a shack. Abe is a public man possessed of a private decency. He’s obviously been scarred by losing his sweetheart Ann Rutledge (Pauline Moore), and tends to clam up when opportunities arise to discuss his background. But he also finds it easy to speak to people in groups. He can find a public voice that communicates well, both when joking and when deflecting a lynch mob. Interestingly, Abe doesn’t laugh at his own jokes, and he never says clever things just to bask in their effect. We see Lincoln negotiating a sour business deal between two farmers. What he lacks in lawyerly finesse he makes up for in force of personality. The man exudes integrity; he “has sand.”

The movie communicates two things — the young lawyer has ethical values and he’s not afraid to go against ‘community values’ in a courtroom. The identical setup would later work well for Gregory Peck in Richard Mulligan’s To Kill a Mockingbird. The newer movie adds endearing children for sentimental effect, and also the ‘sixties notion of liberal righteousness — Peck loses his case, but comes off as the moral victor. Trotti and Ford’s Lincoln wins, and earns the ‘halo of history:’ he’s surely an exceptional man who will Go Places.

Liner note essayist Geoffrey O’Brien associates Fonda’s folksy Lincoln persona with Will Rogers, the late comedian whoo charmed audiences with his witty observations and easygoing manner. In some ways Young Mr. Lincoln is really a fourth John Ford-Will Rogers collaboration, substituting Honest Abe for Oklahoma’s Favorite Son. Lincoln may indeed have had a gift similar to Rogers, although most descriptions of the President indicate a tall, sad character with a faraway look in his eyes. If Lincoln built an aura of myth around himself, I hope it wasn’t with the same kind of “aw shucks” affectations that Rogers perfected on the vaudeville stage. O’Brien points to Ford’s wonderful Rogers/Americana film Steamboat Round the Bend without mentioning the fact that screenwriter Lamar Trotti is the common denominator between that picture, Young Mr. Lincoln, Drums Along the Mowawk and even Wilson. Ford’s visual treatment of Lincoln and his overall vision of Young Mr. Lincoln are superb, but where are the laurels for Mr. Trotti? behind every ‘one film one director’ Frank Capra are two or three Robert Riskins that rarely rate credit. There’s no putting down the director’s contribution, because Young Mr. Lincoln is as assured a film as Ford ever made. Transitional shots of silhouettes on the horizon are visual shorthand for historical reverence. Trotti makes good use of courtroom drama, trading in humor and open sentimentality but not allowing either to drag the story down. At times, Lincoln wields his ‘folksy’ attitude as a weapon, as when he ambushes a witness played by Ward Bond, and demolishes him with a cruel joke about his name.

Ford emphasizes Lincoln’s ingrained ethical foundation, but he’s also fond of showing him as a melancholy soul, forever in isolation. Abe is the guy most likely to leave the party early, the one always broods over problems with multiple facets. We really don’t learn all that much about Lincoln, but we finish the film wanting to vote for him. If such men still exist, they likely cannot withstand modern political pressures — Lincoln was clearly affected by the constant hatred and disapproval directed at him. We watch Young Mr. Lincoln wishing we could believe in our leaders the way we do Henry Fonda’s Abe. Statistically speaking we do more than ever — good or bad, our presidents of late have extremely loyal constituencies.

Henry Fonda quickly makes us forget his rather extreme makeup. That nose appliance really stands out. We marvel at the modeled lighting, even in direct sunlight, that makes his eye sockets look so deep. The lasting impression of this show is the image of Fonda brooding, either standing uncomfortably in his boots or stretched out on porch stoops. The Criterion Collection’s Blu-ray of Young Mr. Lincoln is a revisit of a 2006 DVD edition, augmented with a new 4K digital restoration and uncompressed monaural audio. It looks and sounds just as good as Fox’s original studio prints, which we saw projected at UCLA several times in the early 1970s. Minor flaws in the DVD have been corrected. Most of the film was shot on the back lot and in front of a rear projection screen, with Fonda staring at a mighty river that he wished might take him West and out of Ohio. Cameraman Bert Glennon’s first picture with Ford was 1936’s The Prisoner of Shark Island, and his last Sergeant Rutledge in 1960.

A new extra is an informative new commentary from author, critic and Ford biographer Joseph McBride, who calmly covers the film, the director and the production context from all angles. It joins the older extras from the earlier Criterion disc. A 1992 episode of the BBC’s Omnibus program written and directed by longtime Ford booster Lindsay Anderson is a good general introduction to the problematic director. Some unfunny excerpts show an unpleasantly belligerent Ford mercilessly refusing to give useable answers to a French reviewer. The movie genius was apparently also a mean-spirited boor.

A 1975 Parkinson interview show features Henry Fonda talking about his career in detail, touching on his work with John Ford along the way. Also present is a 30-minute radio condensation of the movie. Disc producer Curtis Tsui includes an insert booklet with two essays. A short piece by Geoffrey O’Brien examines Ford’s masterly visuals, and a typically brilliant (if rambling) Sergei Eisenstein essay quotes Karl Marx and compares Ford’s Lincoln to Illya Muromets, the Russian warrior-hero.