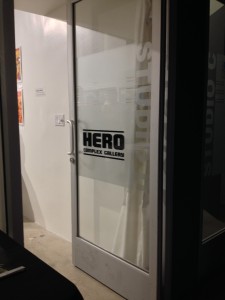 This was originally published on our Facebook page on September 25th, 2013: Hero Complex Art Gallery is nestled away in a corner of the busy South Robertson Blvd in Los Angeles, easily overlooked if not for the monolithic green numbers standing beside the sidewalk reading, simply, two-thousand-twenty. The building itself looks modern, nice, though hidden from view is the gallery itself, blocked by a large black door that obscures all sight.

Feeling excited and anxious at what lay beyond that mysterious pitch-black door, I decided, for the sake of all Trailers From Hell viewers, that I owed it to them to take the leap, face my fears of the unknown, and push open the door.

Pushing that door open, I was met with a modern office complex, to my right were people lounging, sitting, sipping on Pabst Blue Ribbon, Sapporo, Samuel Adams, and any other beer you could think to name. They were talking about film, they were talking about art. I realized that this must be the place.

The doors hadn’t opened yet. But I could see through the large glass door branded with the name Hero Complex Gallery in gray that there were sights to behold within that enclosed white space. Finally at seven on the dot, the doors opened, and Adam Smasher (you can follow him @smashertack), that perfect cross between The Dude and Philosopher, let the flood of art fanatics in. He greeted each one, beer in hand, nodding, smiling. He’s got a very genial personality, very friendly. I shook his hand, we greeted each other with smiling faces and excited eyes, and I entered the gallery. 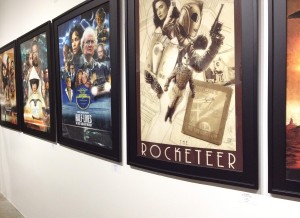 The talent displayed at the gallery for their “Young Guns of Print” exhibit was astounding. To the left were three Science Fiction prints done by the always amazing Matt Ferguson (you can follow Matt on Twitter @Cakes_Comics). His print series was comprised of these three classic films: George Miller’s Mad Max 2 (1981), John Carpenter’s Escape From New York (1981), and James Cameron’s The Terminator (1984). To the right were two pieces done by Phillip Ellering (who you can follow @PhillipEllering) in which two famous directors, in this case, Steven Spielberg and Stanley Kubrick, are shown to be creating their masterworks (Jaws & The Shining, respectively). Going further down the line, there were many great creature drawings both from The Lord of the Rings and The Hobbit,  Attack the Block (2011, produced by TFH Guru Edgar Wright), and beyond done by the fantastic Mark Lone, and beside his work, was a very clever series of drawings, entitled, ‘The Harrison Ford Gun Show,’ comprised of the guns used by Ford in Blade Runner (1982),  Star Wars (1977), and Raiders of the Lost Ark (1980). Beside these were a group of Bettie Page prints done by Tim Jordan. On the adjacent wall were four of the more popular works, a series of large (maybe four or five feet tall) Tim Burton prints done by Marie Bergeron (follow her @marie_bergeron). On the opposite wall, there stood the collection of prints that belong to the heir apparent to the legendary Drew Struzan himself, Paul Shipper (whom you can follow @paulshipper). His work does nothing short of amaze and impress, and all major studios (I’m looking at you Warner Bros. and Universal) should take note. Not only does Shipper capture the essence of the films and their legacy (as he did fantastically with J.J. Abram’s Star Trek (2009), incorporating an homage to the original Star Trek: The Motion Picture (1979)), he brings new life to properties that would otherwise be forgotten and neglected. For example, on the wall hung a most peculiar choice for a print, The Lone Ranger (2013). The original marketing for this film left something to be desired, focusing mainly on the sidekick Tonto (played by Johnny Depp), and may have contributed to the film’s failure to reach an audience. Yet, here on display is a movie poster that made me actually want to see the most decried of recent films. Paul Shipper’s work does it’s job, and does it right. 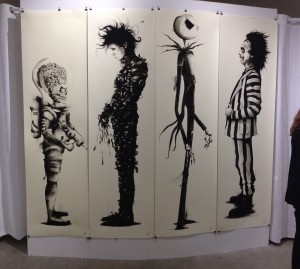 The “Young Guns of Print” exhibit is a sight to behold, and I urge you, fellow art fan and TFH viewer, to go check it out. The exhibit opened on September 20th and will be running through till October 5th. I can’t wait to see what both Hero Complex Gallery and the artists hold in their future, and neither should you.

UPDATE: Hero Complex Gallery is currently showcasing the official gallery exhibit for THE WALKING DEAD. This show will be running now through October 26th.

If you were unable to attend the gallery, you can browse and purchase artwork here: http://www.herocomplexgallery.com/collections/youngguns