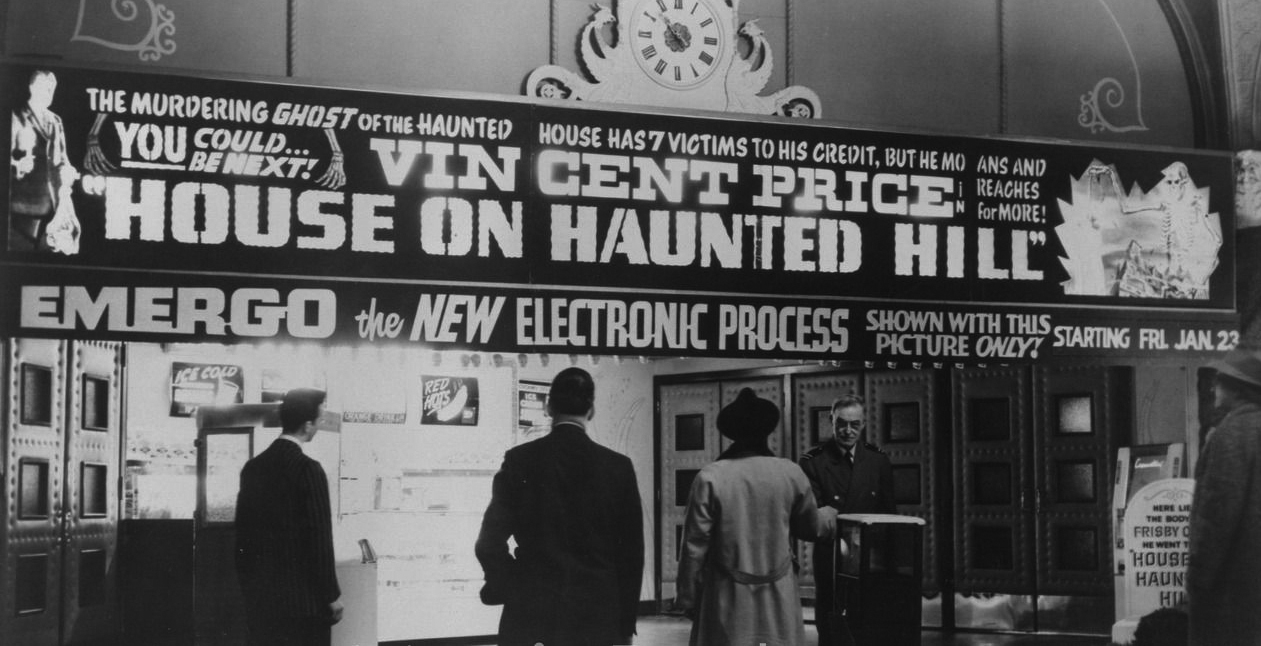 Following in the footsteps of trailblazing publicity hound Carl Denham, William Castle learned that if you can’t bring your audience to the sideshow, bring the sideshow to them – the 3D craze of the 50’s allowed him to do just that.

After toying with the format in 1953’s Fort Ti and 1954’s Jesse James vs. the Daltons, the adventurous director upped the ante with even more extravagant promotional stunts for his late 50’s thrillers Macabre and House on Haunted Hill. Even the vinegary gossip columnist Louella Parsons had kind words for Haunted Hill and with its success Castle suddenly found himself spending more time on gimmicks than coherent story lines.

The first four films from that cockeyed era are collected in William Castle at Columbia – Volume One – a Blu ray set from the UK’s ever-reliable Indicator featuring some of the most memorably peculiar entertainments to ever confound and delight the neighborhood bijou. 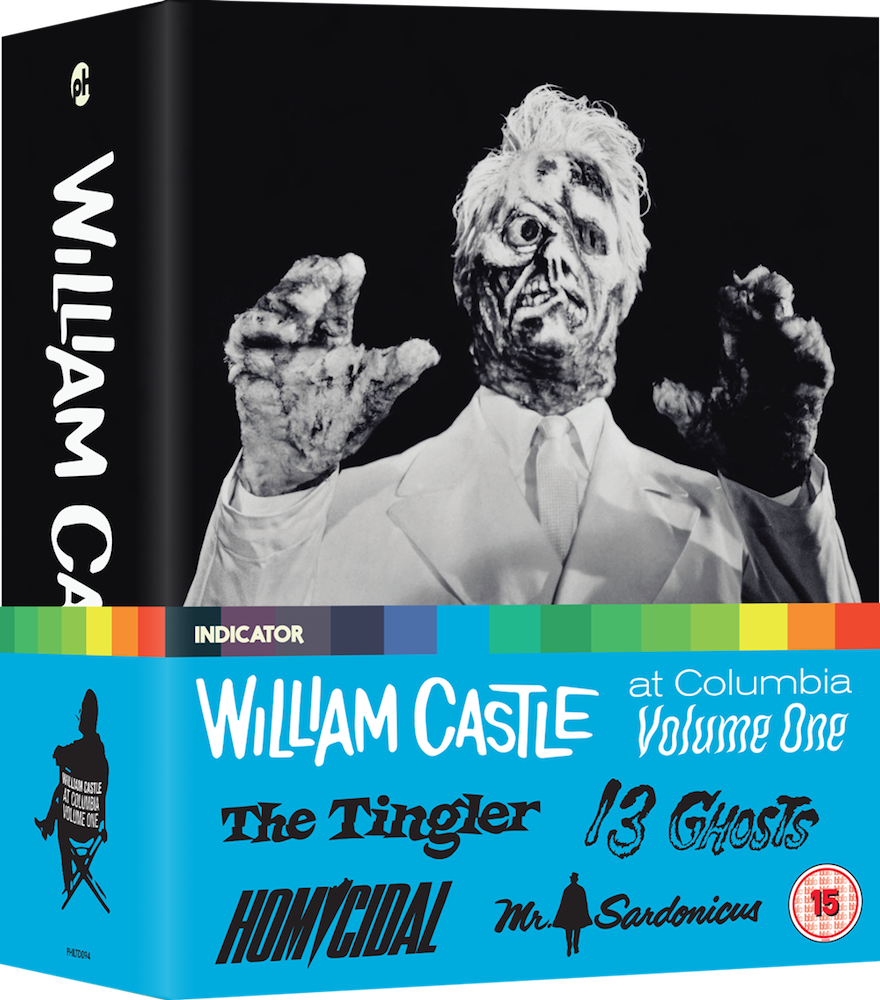 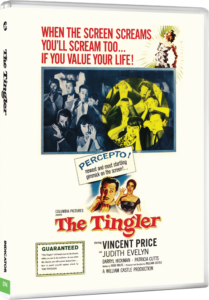 1959’s The Tingler was produced on the heels of House on Haunted Hill and once again the mayhem swirls around the darkly comic marital woes of the leading man, in this case Vincent Price as Dr. Warren Chapin, an avuncular coroner living above his means thanks to his wealthy but acerbic wife Isabel (played by the appropriately named Patricia Cutts).

The doctor’s obsession with the mechanics of death – in particular what happens to the human body at the moment it expires – has strained an already fragile marriage and reawakened a lethal impulse in his two-timing spouse (she may have already murdered her own father for his fortune.)

Chapin’s newfound friendship with a mousy theater manager named Oliver Higgins might be the last straw – matrimony has not been kind to this particular odd couple and when the anxious little man appears at the door with his wife’s corpse in tow, Isabel is appalled but Chapin regards the poor woman as a viable guinea pig for his morbid research into mortality. 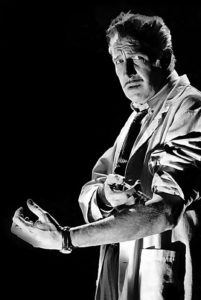 He’s right – the autopsy reveals a lobster-like centipede gripping the cadaver’s vertebrae, a so-called Tingler – named for the creepy sensation that animates the spine when the state of terror is at its apex. That creature’s inevitable escape and reappearance among the patrons at Higgins’s theater leads to Castle’s most brazen showstopper, a prankish assault on his unsuspecting patrons called “Percepto.”

Rigging thousands of theater seats with vibrators designed to agitate the audience was a painstaking and ludicrous undertaking (Castle used war surplus devices that took 4 hours to install under each seat). But with the fortitude of the true believer Castle pulled it off – when Price shuts down the lights and proclaims “… scream! Scream for your lives!” the assembled throng did not disappoint.

Attempts to put The Tingler in a linear or logical context is a fool’s errand – the lightning-like shifts in Isabel and Higgins’ temperaments alone can induce whiplash (giving rise to theories about last-minute rejiggering of the plot). It’s best to consider the film as a series of deranged set pieces – Price’s L.S.D. trip, the bargain-basement boogie man that prompts Mrs. Higgins’ death by fright and, of course, the title character’s squirmy march around the ankles of the movie audience. 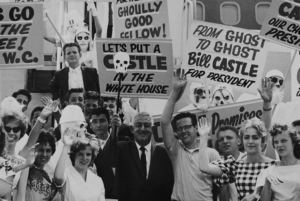 So Castle had another hit on his hands but his ongoing dependence on empty ballyhoo signaled a decline in his moviemaking muscles – never again would he produce such effective little noirs as the Whistler series or the mischievous jump-scares of Haunted Hill – instead he concentrated on his reincarnation as a convivial carnival barker – he even had his own logo, a silhouette of the artist encamped in his director’s chair, his cigar rakishly pointed toward the sky. 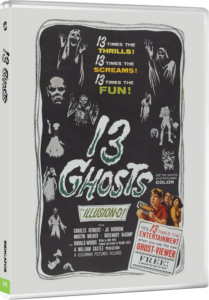 The Tingler initiated that charm offensive with a pre-title sequence featuring Castle himself (he would directly address his fans for years to come, ingratiating himself to a generation.) His next film, a supernatural thriller for the romper-room set, cemented his standing with that same crowd.

With 1960’s 13 Ghosts the director abandoned electrified whoopee cushions t0 take a more cultivated approach to audience participation – it was a color process dubbed Illusion-O that, thanks to a mask-like cardboard device known as a “Ghost-Viewer”, either revealed or obscured the on-screen spooks depending on the public’s level of cowardice and/or boredom. 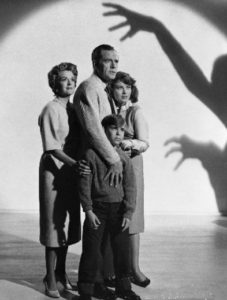 Donald Woods plays Cyrus Zorba, an absent-minded paleontologist who inherits a mansion from his uncle Plato, a recluse who dabbled in the occult and “collected” ghosts on the side. The house is haunted, naturally, and the spirits, including a headless lion-tamer and an Italian chef, are a more playful bunch than typical Hollywood attic-rattlers, resulting in an atmosphere more Addams Family than red-blooded horror show.

Leading the investigation is Buck, the boy of the house played by Charles Herbert (The Boy and the Pirates) Buck is the pint-sized incarnation of 60’s monster-mania – he’s more than eager to see a ghost and succeeds with the help of a bizarre set of goggles which reveals the undead to the wearer – it’s also the cue for the audience to make use of their own Ghost-Viewer. 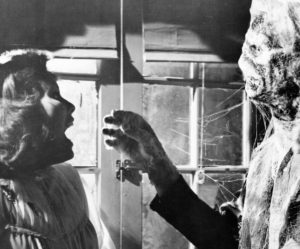 The cast, including ultra-cheery Rosemary DeCamp and the blandly clean cut Martin Milner, is almost antithetical to a fright film and even Margaret Hamilton is brought on board as a mere punch line (it’s unfortunate the Ghost Viewer didn’t have an option to see Ms. Hamilton’s skin in its natural hue – green, of course).

The spirits, seen or unseen, are a benign bunch with the real threat coming from a flesh and blood scoundrel lurking in the shadows – a standard Robb White trope going back to House on Haunted Hill. Those shadows are courtesy of Joseph Biroc, a cinematographer exceptionally skilled at gloom and doom and skillful enough to vacillate between films like It’s A Wonderful Life, The Amazing Colossal Man and Hush, Hush Sweet Charlotte. 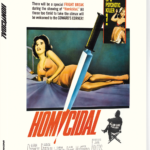 Coming after the Scooby Doo antics of 13 Ghosts and The Tingler’s loopy twists and turns, 1961’s Homicidal feels not only dark but positively adult in its appeal. Thanks to Robb White’s screenplay – with its weirdly convoluted plot line out of Psychopathia Sexualis and Tales From the Crypt – the film never fails to intrigue even if the appropriate audience reaction is WTF.

Jean Arless plays Emily, a cryptic blonde who ties the knot with a bellboy she met just hours before – the oddly transactional nature of the ceremony (she gave the wary porter 2,000 dollars for his trouble) is forgotten when Emily drops her frosty reserve and plunges a knife into the understandably surprised justice of the peace.

Undaunted by the blood on her hands, Emily makes her escape to Solvang, California, a gingerbread village whose charms are a product of its Nordic heritage – all things Danish are celebrated here including a statue dedicated to Denmark’s Hans Christian Anderson. 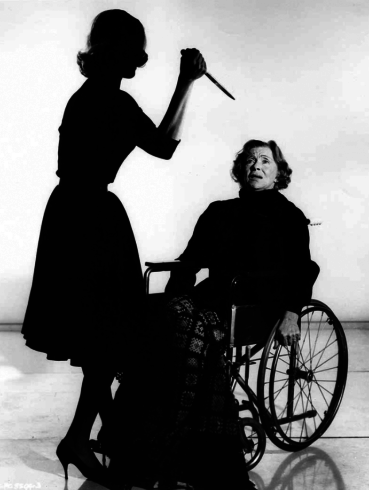 There are no statues to that other icon of Denmark, Christine Jorgensen – but there are a few characters who could pose for it – including Emily and her childhood friend, Warren, recently returned from Scandinavia. It’s their mysterious relationship that propels Homicidal to its topsy-turvy finale.

Castle, still beholden to his gimmicky bona fides, introduces the concept of an on-screen clock timed to appear at the film’s most eerie moment – the problem being its intrusion absolutely kills the suspense in what is a fairly creepy, not to mention gruesome, sequence – Castle cuts off someone’s head but shoots himself in the foot in the bargain.

Running Psycho’s story through a woodchipper and filming the results in a funhouse mirror was an audacious gambit for Castle and White – the movie is riddled with blatant steals from Hitchcock’s classic  (including a  bland psychologist based on Simon Oakland’s know-it-all shrink) – nevertheless the film packs a sleazy punch that Robert Bloch might approve – even though some dubious character make-up and dreadful dubbing tips the audience that something is indeed rotten in Denmark. 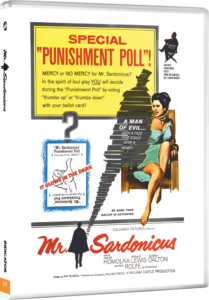 Based on a story by Playboy’s fiction editor Ray Russell, 1961’s Mr. Sardonicus is a slightly sick bit of gothic hokum involving grave-robbing, ghouls and hysterical paralysis. Ronald Lewis plays a doctor summoned to a bleak castle in the country of Gorslava where he is to attend to its owner Baron Sardonicus, a tortured soul whose face has taken on the ghastly contours of a grinning skull.

An inspired Castle interrupted a Hawaiian vacation to purchase Russell’s story (first published in the January 1961 issue of Playboy) and hired the scribe to write the screenplay – what is immediately missed is the catty dialogue of Robb White – the action may be coherent but it is nowhere near as funny. 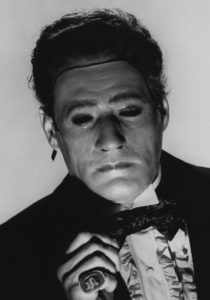 Also missed is the face of star Guy Rolfe who spends the bulk of the film hiding behind an Edith Scob-like mask. The towering Rolfe, who loomed over most cast members with his angular physique and gloomy Easter Island profile, was a quintessentially gothic apparition – due to his disguise the underhanded tasks fall mainly to marble-mouthed Oscar Homolka (including torturing the maid with leeches).

The revelation of Sardonicus’ grimacing face, a low budget replication of Conrad Veidt’s The Man Who Laughs, is no doubt unsettling but his plasticized kisser is seen so often and under such brightly lit circumstances, the most mild-mannered of theater goers can see how glaringly fake the effect is. The most shocking aspect of the film might be that the uninspired TV lighting was the work of Burnett Guffey, the superior cinematographer responsible for From Here to Eternity and Bonnie and Clyde. 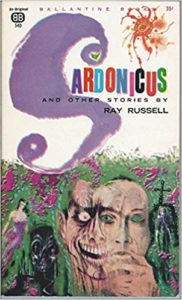 But this is Castle at Columbia and the director’s output reflected the studio’s penny-pinching history – the pedestrian lighting, the chintzy set trappings and the endlessly recycled sounds of Mischa Bakaleinikoff (though Castle wisely eschewed Bakaleinikoff for the somber tones of Von Dexter) – all of which found their root in the studio’s bargain basement origins.

The echoes of poverty row may hang over these films but Castle’s sense of fun and abiding regard for the folks in cheap seats prevails. Castle may have been a carnival barker but he was no huckster – he lived his life giving the audience what they paid for and a lot more. Thanks to Indicator’s tender loving care, his efforts look terrific.

Indicator’s new set comes with a goldmine of material including the essential Castle documentary, Spine-Tingler! The William Castle Story. Some the extras have been ported over from Sony’s 2009 dvd release while others are brand new. Oddly, though the ever mindful UK company never skimps on lavishly illustrated booklets and other ephemera, Indicator doesn’t include a replica of the Ghost Viewer (essential for optimum viewing – not.)

So settle in, here’s the official rundown from Indicator’s site:

Here’s Joe Dante on The Tingler