Currently tearing up ballyhoo market boxoffice records, this generally ordinary horror film has a potent selling gimmick in its rat heavies. A big grosser for the broad range of markets thanks to unusually powerful promotion campaign. Rating: GP. 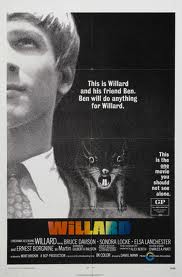 Willard, the tender story of a boy and his killer rats, is already the surprise hit of the season, thanks largely to a shrewd ballyhoo campaign devised by the showmen at Cinerama releasing which makes the BCP Production a virtually irresistible attraction for a broad range of thrill fans. Far better horror films have come and gone in recent years, but without Willard’s main distinction‑its rat gimmick, which is bringing out the monster fans, the kids and anyone else hooked by the ads and the exciting TV spots. Drive‑in business, especially, will be a smash. A director with more of a flair for the grotesque might have turned Gilbert Ralston’s screenplay (from Stephen Gilbert’s novel RATMAN’S NOTEBOOKS) into a ferociously horrible horror classic which nevertheless probably wouldn’t have had the wide appeal this one has. As it is, Willard is just bland enough to comfortably amuse the general run of audiences, kids included, without really disturbing or horrifying them. Director Daniel Mann begins the story in a leisurely fashion and doesn’t build much in the way of suspense.

The high‑key lighting and simple sets make the modest budget evident, but the film works nonetheless. Bruce Davison plays the lead, a nebbishlike loser who uses his army of rodent friends to get back at venal employer Ernest Borgnine. All rolling eyes and twitchy movements, Davison is too obviously psychotic to be convincing. Borgnine makes the most of the picture’s only meaty role, as the cad who stole Davison’s family business, and his nastiness is amply rewarded with a climactic assault by legions of rats commanded by Davison to “tear him up.” Elsa Lanchester, looking rather ratty herself, is Davison’s hypochondriac mother who passes away early on, and Sondra Locke is a sympathetic secretary who takes an unfortunate romantic interest in Davison. Acting honors really go to the rats, handled by Moe Di Sesso, who go about their chores with collective bravura. The head rat in particular, a malevolent‑looking fellow named Ben, deserves a sequel all to himself. The rat attacks, on Borgnine and, in the end, on Davison, are suitably bloody without being too realistic, but the sound effects are notably unnerving. The hungry munching and gnashing of little teeth—and the inexorable pattering of so many little feet—are the sort of noises that stay with you late at night. Alex North’s light music score seems written for a different picture.

Willard was released on VHS by Prism Home Video in the 1980s, but subsequently vanished from video, cable and commercial TV—a surprising disappearance for a film once so popular. It was remade, with Crispin Glover as Willard and MULHOLLAND DR.‘s Laura Harring in the Sondra Locke role, under the direction of THE X-FILES’ Glen Morgan. Joe’s suggestion of giving Ben “a sequel all to himself” fell on receptive ears at Cinerama: BEN arrived in theaters the following summer—with a theme song performed by Michael Jackson, no less! BEN was also given a brief video release on the Prism label. – TL