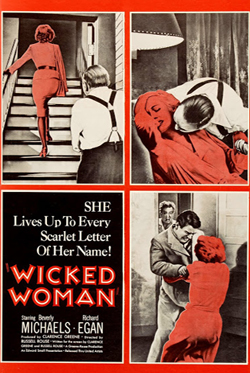 The memories of movie fans are papered with the work of the remarkably prolific producer Edward Small, ranging from such sophisticated fare as Witness for the Prosecution to boomer favorites like Jack The Giant Killer and It! The Terror From Beyond Space. In 1953 Small produced Wicked Woman, a memorably sleazy but amusingly self-aware noir out of the Jim Thompson playbook. Directed by Russell Rouse (The Oscar), the film stars Richard Egan as a small-town barkeep and perennial femme fatale Beverly Michaels as the sexy drifter who has his number. Co-starring Percy Helton, the high-pitched gnome from so many other essential noirs including Kiss Me Deadly and Criss Cross.