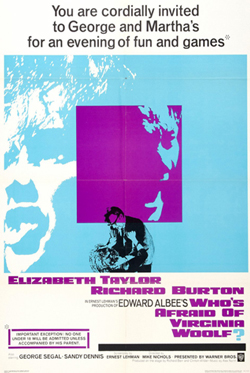 Writer-director Mike Nichols, then known for Broadway comedies and his satirical work with Elaine May, surprised everyone by choosing Edward Albee’s incendiary psychodrama Who’s Afraid of Virginia Woolf? as his motion picture debut. Filmed on the campus of Smith College in Massachusetts, it’s a cinematic one-two punch thanks to the gloves-off performances of Richard Burton and Elizabeth Taylor (who bulked-up to a fighting weight of 155 lbs). Taylor snagged an Oscar (along with co-star Sandy Dennis and cinematographer Haskell Wexler—Burton and George Segal were nominated but lost). Albee had wanted James Mason and Bette Davis for the leads (in 1980 Nichols and May themselves starred in a New Haven revival).