Stand back, watch the fur fly and don’t forget to duck — this is surely the most psychologically toxic play ever adapted for film. The legends Liz and Dick are terrific, and Mike Nichols conquers the screen in his first job of direction. 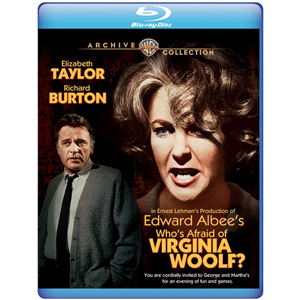 I remember what my reaction was, when I was younger, to movies adapted from plays: no matter how brilliant the dialogue, the thought of people standing around rooms talking was stultifying. Even for great epics and action pictures, I tended to go into a mental holding pattern for most dialogue scenes, waiting for ‘something to happen.’ It takes a different upbringing to appreciate theater, and perhaps more of an effort to see through the artifice of filmed theater. Sidney Lumet’s A Long Day’s Journey into Night is something I appreciate. But do I enjoy watching it?

Mike Nichols’ film of Edward Albee’s Who’s Afraid of Virginia Woolf? is something different. For his first film Nichols takes on the toughest play imaginable, and then re-invents the rulebook. Made the same year, Fred Zinnemann’s A Man for All Seasons is a laudable play, opened up into a beautifully staged film. But it’s quite traditional in approach. Who’s Afraid has the feel of something finding a new path. It’s an intense four-person sweatbox of a movie, played mostly in a couple of rooms in an associate professor’s apartment in some New England college. The impression is of an unbroken series of cruel mind games, with the players at each other’s throats at all times. It has the unbroken feel of a TV play, yet also is directed for the camera and heavily edited for maximum dramatic impact: we know we’re not on a theater stage and it doesn’t feel like a film soundstage, either. Cinematographer Haskell Wexler gives the show a docu immediacy, but in deep-focus, delicately lit 35mm. Only one scene looks grainy, and (according to director Nichols) that’s only because the best take was grossly overexposed.

Edward Albee’s play was already known as one of the best ever written; its recreation of a feuding couple in a vicious academic atmosphere was partly taken from real life. While a struggling writer, Albee would attend informal parties held at the apartment of a professor named Willard Mass and his wife, the avant-garde artist Marie Menken. Albee based his lead characters on these two, who would drink all weekend and engage in bouts of verbal and sometimes physical abuse. Their life is covered in an interesting docu I reviewed, Notes on Marie Menken. 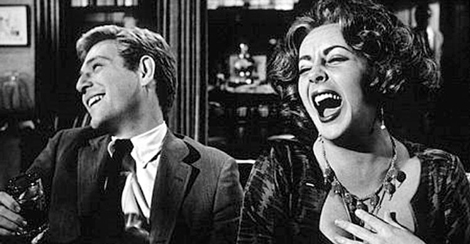 Yet the key to the relationship, and to Albee’s play, is that despite all the mental-cruelty fireworks, the ‘broken’ couple is devoted to one other.

Synopsizing Who’s Afraid is not easy; one look at the stills give one an idea of what goes on. Martha (Elizabeth Taylor) invites a new faculty couple, biology teacher Nick (George Segal) and his wife Honey (Sandy Dennis) over for some late-night drinking, setting the scene and providing the witnesses for another drinking + verbal abuse session with her professor husband George (Richard Burton). At first uncomfortable, Nick and Honey take part in the drinking and watch in various states of surprise, embarrassment, shock and horror as Martha and George flay each other with cruel observations. As the daughter of the college president, Martha harps on George’s lack of a stellar career; George appears quietly hurt by these slings and arrows but prepares his own passive-aggressive retaliation.

The evening becomes a ‘journey to the end of the night’ party. Truths and lies are aired and then used as weapons. Martha flirts with Nick in hopes of making George angry. Honey has a hard time dealing with the liquor. Nick feels awkward and tries to atone by commiserating with George — who doesn’t flinch from being mercilessly critical of Nick either. Eventually ‘subject A’ is brought to bear in the arguments, a subject that George and Martha have had a tacit agreement not to use. The rage and resentments build to a pitch that simple words aren’t going to cure.

Who’s Afraid of Virginia Woolf? throws us into the middle of this academic-intellectual catfight, and is possibly more intense than a stage performance might be. We never forget that we’re looking at what were then two of the top movie stars in the world, and the transformation of Elizabeth Taylor into this blowzy faculty wife is intimidating in the extreme. Richard Burton really seems submerged in his part, rather than merely performing a role. The contrast between this movie and the excruciatingly false The Sandpiper is like night and day. Most of us discovered George Segal and Sandy Dennis in these parts, and still identify them as Nick and Honey even in other films. 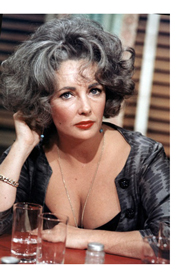 I won’t pretend to have any special insights about Who’s Afraid; but would instead like to express my awe of what Mike Nichols has done with his movie. Most pictures one can watch casually, and observe the way it’s put together in between important dialogue. And in most films the framing and cutting of shots is a mechanical process that boils down to coverage. In a really good piece, we might rewind a bit to try and figure out a clever trick of timing, or to see what special emphasis made a moment seem better than usual, making us forget about things like framing and editing. in Who’s Afraid we’re paying such close attention to hear every bit of wicked dialogue and every nuance of mean-spirited subterfuge, that we don’t realize that Nichols has taken such careful control of the proceedings. I would imagine that the big stars were galvanized by the material, the attention to camera details and Nichols’ forceful approach. To see an alternate, dramatically D.O.A. approach to filmmaking, take a look at The V.I.P’s some time.

I’ll spare you more of my so-called ‘insights’ on this show and simply recommend it highly. It’s probably better to move on to the disc evaluation. Warners’ extras are particularly good.

The Warner Archive Collection Blu-ray of Who’s Afraid of Virginia Woolf? is one of those discs where the HD encoding really makes a difference. The phenomenal cinematography of Haskell Wexler is as much a star as the film’s headliners — the camera is invisible yet is continually moving and finding the perfect viewpoint for every dramatic confrontation. Sometimes we feel like Liz Taylor should be spitting on the lens, the feeling is so intimate. This was the last beer call for B&W cinematography in Hollywood, and it looks so good, we wouldn’t want to see it in color. The audio recording is also sensational. Editor Sam O’Steen made his reputation with this picture — when Roman Polanski came to Hollywood, he asked for O’Steen right away. The picture is packed with overlapping dialogue yet cuts like butter. I assume that some looping must have been done but the technical seams are invisible.

From an earlier DVD comes one of the best commentaries I’ve heard, pairing director Nichols with director Steven Soderbergh. They were sensational together on the commentary for Nichols’ Catch-22, but the level of insight and candor here is even greater. Soderbergh continually guides Nichols to reveal more secrets and directing-acting-performing detail. We get Nichols’ take on all the actors, as well as his self-assessment as a first time director: he admires the self-confidence he had going into this show. He knew exactly what he wanted to do, as he seldom did later. Genre fans take note: the very first image of the moon makes use of a stock shot Nichols said he purloined from an unnamed horror film.

The late Haskell Wexler contributes his own commentary, a sturdy complement to the directors’ confab. You know, when a film makes this much history, there ends up being a lot more to talk about it than just Liz Taylor’s choice of wardrobe.

Three featurettes produced for the disc start with Shocking for Its Time, Jack Valenti’s detailed rundown on the battle between Who’s Afraid and the Production Code. The play, the director, the stars and the studio were in this case powerful enough to fend off the MPPA, which before production began had mandated a long list of dialogue deletions. Mike Nichols ignored them. A group of pundits and critics (Richard Schickel, etc.) gang up for a standard critique of the film. A seventy-minute older bio piece on Elizabeth Taylor, narrated by Peter Lawford, contains a great many interesting film clips.

Other items are a 1966 interview with Mike Nichols, Sandy Dennis’s screen test, and several trailers.