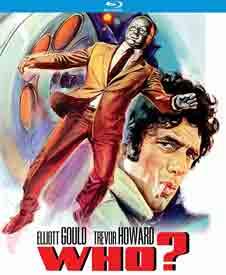 Today’s filmgoers say they want more cerebral science fiction films, and some moviemakers make an effort to comply. This year’s Arrival is quite ambitious, and last year’s Ex Machina is as good as any sci-fi movie since 2001.

But back in the 1950s producers quickly discovered that the audience wanted little more than monsters and mounting disaster in their sci-fi. Although some wonderful work snuck through, killer robots and alien invaders became the norm. From the 1970s forward, even with Stanley Kubrick aboard, nobody was adapting classic sci-fi without changing everything for box office appeal. Expensive science fiction was routinely re-formatted in terms of action-adventure thrills: monster chase pictures, conspiracy chase pictures. Movies that dared stick close to an interesting abstract concept rarely broke through commercially even when they earn glowing reviews. Think of the remarkably original, dramatically compelling Gattaca. It’s the most prophetic Sci-fi picture of the 1990s. It wasn’t a failure but not that many people saw it.

The weaknesses in 1974’s Who? will be obvious from the beginning, but viewers interested in something different will be intrigued just the same. It maintains a focus on its main theme, and we can tell that the actors know they’re dealing with an unusual script. Who? may have been an influence on the much more commercial RoboCop, but science fiction author Algis Budrys’ story about a cybernetic human has very different aims.

The show begins similarly to the espionage thriller The Spy Who Came In From the Cold. American agents await the release of a man across an East German checkpoint. Irreplaceable American scientist Lucas Martino (Joseph Bova) was involved in a car crash months ago. East German doctors saved his life under the supervision of Soviet spymaster Colonel Azarin (Trevor Howard), who likely staged the ‘accident’ in the first place. American spy analyst Sean Rogers (Elliott Gould) is fearful that during his recuperation under the tutelage of Azarin, Martino may have given up his secrets or become a double agent. All are shocked when the man they get back is partially a cyborg: a mostly metal robot- man with human eyes and one human arm. Martino now talks with a different voice. His metal face shows no emotion. He can’t be hooked up to a lie detector. Rogers’ superiors want Martino back on the job as soon as possible, but Sean refuses to clear the metal man until he can find some way of confirming his identity. Sean knows Azarin’s tricks. This mystery ‘thing’ could be somebody else in disguise.

Who? is a bit rocky in casting and performances. Elliott Gould carries the movie with a nicely subdued performance. He appears to believe in the story, and plays Sean Rogers as a civil service employee locked in a Cold War chess game with his unseen opposite number, Azarin. The always- professional Trevor Howard is a bad fit for the part of a Russian spymaster. He is simply too British to convince and doesn’t give the part much energy. In fact, none of the scenes in East Germany have much interest or appeal — they don’t seem to be happening anywhere. 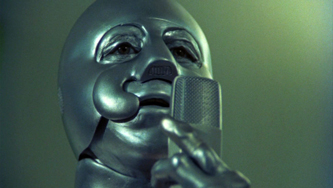 This particular story might have been better served as a television play. Unable to prove or disprove his loyalty, Lucas Martino at first begs to be returned to work, where he can bury himself in the Pentagon’s top-secret scientific project. The dialogue and relationships are more important than the film’s action, which has been augmented with a couple of car chase scenes by the famed Rémy Julienne. Although convincingly low-key, the chases serve mostly to point up the fact that the movie isn’t about action. The production was filmed in Germany, with some scenes shot on location Miami, Florida.

The movie wants to be about the mystery of identity — without our bodies, how can we prove we are who we are? Brain-swapping Frankenstein movies can be very compelling, as when a wife must communicate with a monster that contains the brain of her husband. Philip K. Dick’s The Three Stimata of Palmer Eldritch has a man come back from an interstellar voyage, reconstructed as a new entity that might be something else entirely. That’s sort of what has happened to Dr. Martino.

The movie’s problems are obvious from the start. Robo-Martino is such a leap forward in technology that the Russians must be far more advanced than the West, and the film’s concept of a robotic man is just too advanced for 1975. We hear scientists saying that they can’t figure out how robo-Martino works or what he’s made of. Nobody would be in a hurry to put Martino back to work. They’d instead assign a team of scientists and doctors to reverse-engineer robo-Martino, to catch up with the Russians.

In other words, the fact that robo-Martino EXISTS would override petty questions about his exact identity. It’s similar to the conundrum in the fine Sci-fi picture Quatermass and the Pit. In trying to figure out what’s happening with some buried alien artifacts, a scientist pulls ‘something he’s been working on’ from the shelf: a device that reads one’s dreams and thoughts and projects them on a screen. Forget theories of an ancient alien invasion — the detour about the thought projector would be just as important. 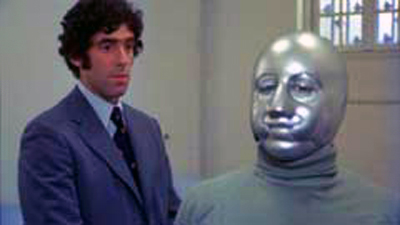 RoboCop of course dazzled us with props, costumes and makeup effects that allowed us to imagine that a robo-man could indeed be a living cyborg. Who? was made in 1973 before the explosion of makeup effects illusions in low budget movies. Its robot man would be fine for a stage play, or an Outer Limits episode, but it just isn’t sophisticated enough for the big screen. The metal man cobbled together for Who? will probably disappoint most audiences. The metal body looks like a costume. Neither will Sci-fi fans appreciate the odd appearance of the metal head, a silver-painted rubber item that reminds us of Jack Haley as the Tin Man. A design piece around Martino’s cheeks gives him a countenance very much like the same movie’s Cowardly Lion. Once in the costume, actor Joseph Bova can walk about like any ordinary guy, but with a bald silvery head. He’s on camera constantly, so it’s pointless to try to make his appearance mysterious. He’s not tall or imposing in any way, and we’re told that the strength of his cybernetic arm is no greater than his other organic arm. Director Jack Gold uses scenes of robo-Martino strolling down a business sidewalk in Miami. Real passers-by stare, but don’t cause a scene. It’s just a guy in a silver mask, so what?

Yet star Joseph Bova received high praise in contemporary reviews. The New York actor began in musical comedy and starred in the original cast of Once Upon a Mattress with Carol Burnett. Bova projects concern and frustration through his metal mask. Excellent dialogue brings out robo-Martino’s plight when he realizes that Sean is trying to determine his identity through cruel deceptions. The metal man must spell out his unique existential situation in words. He feels, worries and cries like any normal person on the inside. But Martino’s metallic exterior expresses none of these emotions.

The drama, then, is psychological. John Gould’s screenplay uses flashbacks to show the wily Azarin saving Martino’s life and then pressuring his experimental cyborg surgeons to get him in shape for interrogation. Azarin had no better luck penetrating Martino than Sean has. Conventional interrogation techniques don’t work on a man who is a partial robot. In one of the few developments that work up story tension, Azarin considers replacing Martino with a “ringer”, a scientist-defector who knows a little about Martino’s Pentagon work. 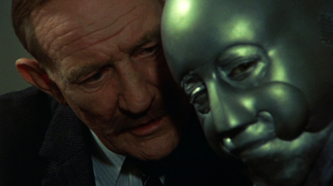 In the present, Sean Rogers turns his detainee loose and watches as he tries to contact a previous lover, Edith (Kay Tornborg). This makes for an impressively mature dramatic situation. Rogers has bugged Edith’s apartment and hopes to finally learn if Martino is really Martino. Instead, Martino realizes that he’s still being monitored, and undergoes a change of attitude. Who? finally makes an odd statement about identity in a world where the authorities try to quantify and validate the concept of trust. Martino (if he is Martino) is a patriot, but what does he owe a society that can’t respect his loyalty and leave him be? Technology is intrusive, and our natural reaction is to isolate ourselves.

Who? is not the most ambitious of Sci-fi features. But it gets a “B” for Sci-fi thrills and a solid “A” for fidelity to its philosophical concept, a much more difficult goal. A more expensive or technically adroit production may have added little; plenty of new Sci-fi movies with terrific sets and convincing special effects die in the first scene for lack of anything resembling an interesting idea.

The more one thinks about the state of moviemaking in 1973, the better robo-Martino’s metal mask looks – remember, those were the years of TV’s The Six Million Dollar Man. Robot men in ’70s movies were never very convincing: think of the boxy Bozo in the Ice Cave in Logan’s Run. When CGI enabled the visualization of zillions of fighter robots for Star Wars sequels, or a robot factory in the Will Smith I Robot, the dullness of big-time special effects took over. If robo-Martino were computer-animated, he wouldn’t have been half as sympathetic as Joseph Bova’s simple performance, emoting behind some plastic and rubber. Who? gets high marks for honest effort.

John Gould is also the screenwriter of another tough nut of a Sci-fi assignment, the English eco-thriller Doomwatch. I watched it; it’s eighty minutes of an investigator finding out what we already know, followed by an abrupt, unsatisfactory conclusion. Director Jack Gold has worked mostly on classy TV plays. His biggest feature films were Man Friday with Peter O’Toole and The Medusa Touch with Richard Burton. 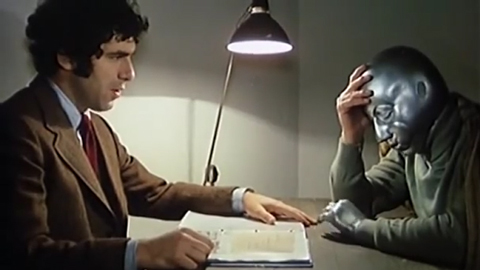 The KL Studio Classics Blu-ray of Who? improves on Scorpion Releasing’s DVD from seven years ago. The cinematography is not particularly interesting in lighting or framing. The night scenes at the border crossing are expressive but the rest of the movie plays out in a blah nowhere-land like a TV movie. Although almost all of the film is in great shape, a scene with Trevor Howard still has a bad color-shifting problem for a few seconds, drifting between greenish to bluish hues. Then another scene later on has a strange pulsing in the highlights. From what I can see, it looks like a misaligned camera shutter in the original footage. Neither flaw lasts very long or detracts from our ability to enjoy the show.

The disc carries over a commentary with director Jack Gold, who talks mostly about the physical production and personalities involved. He seems to relate to the film as a spy movie about a practical problem of identity, not a science fiction film with bigger things to say. But Algis Budrys’ ideas seep through in the conversations between Bova’s metal man and Gould’s spy consultant.