Otto Preminger and Gene Tierney’s return to the noir fold plays better now than it once did — the performances are impressive and the villain’s diabolical murder scheme is as good as anything that Fantomas or Moriarty ever came up with. Tierney’s pampered wife is the perfect patsy for a con-man with hypnosis skills — a fraud who decides to cover up an earlier crime by mesmerizing a new victim to frame herself for murder. The focus is on third-billed José Ferrer… who puts an oily menace into his character that few actors could provide. 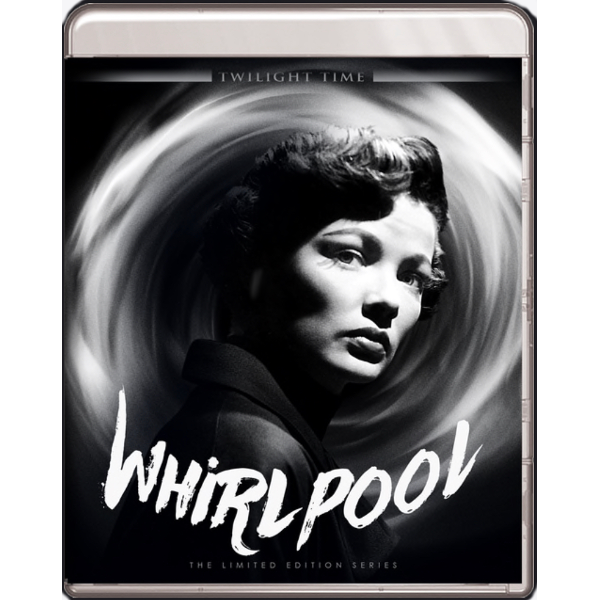 Otto Preminger’s early career was rocky — his first comedies aren’t great work and he got along so poorly with Darryl Zanuck that taking over the direction of Laura was almost an accident. Neither That Lady in Ermine nor The Fan did well, so in 1949 he reverted to noir for a trio of thrillers. The first was Whirlpool with Gene Tierney. Preminger would be more comfortable when he left Fox to go independent, and began making his name by challenging the Production Code.

Imperfect casting and some credibility issues work against Whirlpool, but can’t dent its self-assurance. Although usually considered a straight thriller, the story becomes ‘noir’ if we take seriously the mental disturbance of its female leading character. It doesn’t have much of a reputation, perhaps because original reviewers were wary of José Ferrer’s ‘big’ presence, and the less demonstrative performance of Gene Tierney. But it is rich in ideas that relate to other dark thrillers of the time, and not just Preminger’s Laura. Something at its center is uncommonly honest about relationships, and how easily they can be twisted.

The locale is Los Angeles’s upscale neighborhood of Westwood, where the Beverly Hills merchants are careful not to upset the wealthy clientele. Astrologer, womanizer and psychologist-without-portfolio David Korvo (José Ferrer) latches on to Ann Sutton (Gene Tierney) after rescuing her from a shoplifting charge that she’s terrified will get back to her well-known psychiatrist husband, Dr. William Sutton (Richard Conte). Korvo’s smug charm and insinuating manner disturb Ann, but when he convinces her that he’s interested in her well-being, and not blackmail, she puts her faith in him. Little does she know that the diabolical Korvo intends to involve her in a bizarre murder scheme, to eliminate an earlier socialite he has bilked and seduced.

Whirlpool begins as a glossy women’s magazine tale with all the trimmings – a pampered but disturbed wife, a loving but remote husband and an interesting but dangerous Other Man. Ben Hecht and Andrew Solt’s screenplay is from a story by Guy Endore, a writer whose earlier claim to fame is a bizarre historical fantasy called The Werewolf of Paris. This pulp thriller about marital guilt and trust introduces a view of hypnotism and psychoanalysis rather sophisticated for the time; the brand of headshrinking shown here is considerably more credible than the knee-jerk goofery that writer Hecht had to deal with in Alfred Hitchcock’s Spellbound. Call it shrink versus fake shrink, a fantastic crime tale cleverly worked out.

Did audiences find Preminger’s movie far-fetched? Whirlpool goes in for hypnotically-induced crime, a gimmick associated with cheap thrillers, like that old standby, amnesia. The ‘big frame’ laid for Ann Sutton at the crime scene is certainly clever, much more interesting than those old ‘locked room’ whodunnit thrillers. But audience resistance begins earlier, for other reasons. No matter how many stories we read about tricksters fooling intelligent people, we just don’t like the quack conman David Korvo. He reminds us of Robert Vaughn’s disgustingly condescending politician in Peter Yates’ Bullitt. Korvo is so oily and insulting, it’s a surprise that he can get away with anything, let alone win the confidence of the society folk that fawn over him. This requires that his casual chump targets (Constance Collier’s matron, Fortunio Bonanova’s insecure Italian) be unusually stupid. Previous victim Theresa Randolph (Barbara O’Neil) has wised up to Korvo’s game, but the movie cuts the woman no sympathy. She’s been given a shock streak of white hair similar to Elsa Lanchester’s monster-do as The Bride of Frankenstein. 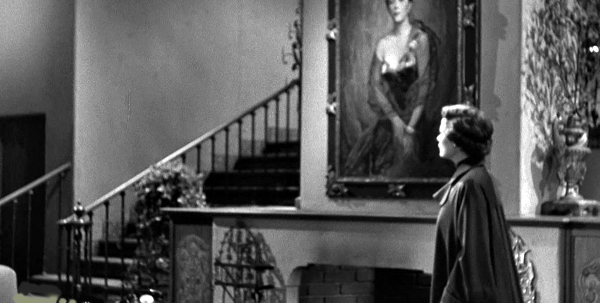 Other Frankensteinian ideas have been stitched into Whirlpool. (Spoilers) Theresa Randolph’s portrait is the centerpiece at the scene of a crime, occupying a visual space analogous to the painting in Laura but otherwise minimized. Charles Bickford’s pragmatic Lt. Colton has just lost his wife, but unlike Dana Andrews he makes no connection with the lady in the picture. Colton also has no deeper significance to the story, unlike Bickford’s ex-cop Mark Judd in Preminger’s earlier Fallen Angel. For all its excitement, Whirlpool isn’t as well constructed as some of Preminger’s earlier thrillers. Beyond José Ferrer’s acting gymnastics, the best scenes are the ones in which Richard Conte’s hurt husband deals with the trauma of marital disillusion… and slowly recovers. His tension is to me what makes Whirlpool noir. A standard whodunnit would have Dr. Sutton either turn on Ann, and become a villain, or support her without reservation and be a saint. Sutton instead must navigate a day of confusion, before regaining his equilibrium. That’s fairly adult, for 1949 Hollywood.

David Korvo is an amazing guy. His talent for self-hypnosis enables Korvo to achieve near-superhuman feats of endurance, overriding exhaustion and pain to skulk across town while fresh out of the operating room from a gall bladder procedure. This permits the flashy actor to hold center stage for an impressive scene. Korvo’s obsessive ordeal makes us think of Richard Basehart’s equally daunting performance in the powerful He Walked by Night, released the year before. Basehart’s Roy Martin uses sheer willpower to operate on himself to remove a policeman’s bullet.

Korvo is remarkably talented, we agree. He considers himself a genius but repeatedly reveals his twisted motivation: to humble and ruin an authentic respected psychoanalyst and steal his wife in the bargain. This makes him a Lucifer character, hurting people out of pure envy. Korvo’s elaborate scheme to plant false evidence is masterful and almost foolproof — the outrageous elements are the parts that work best.

Hecht and Solt trip up a bit when they must force psychoanalytical realities to fit the pattern of a conventional thriller. Korvo isn’t the only one using superhuman skills on himself. After confessing her ignorance of her guilt, Ann Sutton performs an instant and accurate auto-analysis, immediately uncovering the childhood origin of her kleptomania. Her husband at first turns his back but reverses direction to confirm Ann’s self-diagnosis and perform an Act Three cure, with True Love as the medicine. Despite Whirlpool’s sophistication, it’s still tainted by the ’40s fad for ‘magic psychiatry’ stories.

Of course the joker in that argument is that David Korvo’s hypnosis scheme now seems considerably more credible, after the next decade’s fears of brainwashing and mind control. The exact same process is the basis of 101 assassination conspiracy theories.

The psychiatry may be pat but some ideas behind Whirlpool are insightful. The core problem for Ann’s mental dysfunction — simple kleptomania — may be due to a vague malaise, in a claustrophobic marriage controlled by her husband. Naturally, the stifling restrictions are about money. The subtle suggestion is that the cure for modern relationships is consumerism: let her spend money, Doc, and all will be okay. The underlying soul-sickness might be an upscale version of the depression felt by Dick Powell in the great domestic noir by André De Toth, Pitfall: Life is stagnant, I’m going to work every day and none of it seems to have a meaning. Ann Sutton may carry her existential burden while dressed in Oleg Cassini fashions, but we’re cutting her some slack. Depression is depression.

Powerhouse actor José Ferrer is almost too much for the role, even though I can’t think of anyone who could do it better. How many Hollywood leading men could convincingly play such a charming megalomaniac? Gene Tierney is fine, but this is yet another major vehicle that merely asks her to be beautiful, confused and feminine. She’s best when deflecting Korvo’s reptilian advances. Richard Conte has an uphill struggle to convince as a psychoanalyst, due to our prejudiced view of him as a working-class tough guy. But the way Dr. Sutton overcomes his initial hostility to rally to his wife’s defense plays well. Charles Bickford is barely granted an attitude beyond unconvinced skeptic, but we welcome his change of heart as well. Some of the details of Ann’s incarceration are interesting — I didn’t know that an accused criminal isn’t allowed to have a private conversation with their spouse or lawyer.

Although I try to be critical of Whirlpool, all four of its leads generate real star appeal. A remake made today would surely require as a commercial necessity that Ann Sutton’s character have a sex relationship with David Korvo, removing any character subtlety. Preminger & associates must have had Laura in mind while writing the conclusion. It works itself to a nifty finish, resolving the leaky gall bladder issue and other loose ends with maximum efficiency. David Korvo is a variation on the Clifton Webb’s egotistical Waldo Lydecker in Laura. Korvo’s final gunshot destroys the important prop that clears up the mystery, almost exactly as did Lydecker’s in the earlier movie. It all wraps up neater than a silk bow, unless we remember that Ann Sutton still has serious mental issues. If Billy Wilder were directing this movie, he’d make sure that Ann steals something on her way out of Theresa Randolph’s apartment.

The Twilight Time Blu-ray of Whirlpool gives us a very clean transfer of Otto Preminger’s intense hypnosis-murder thriller. The old (2005) Fox DVD had no visible flaws, and Arthur Miller’s B&W photography looks even richer in HD. In the scene where Korvo first hypnotizes Ann, a shadow comes over her face, held in (beautiful) close-up. It may be Korvo’s shadow, or just the sun going behind a cloud outside. It’s quite subtle. Composer David Raksin hasn’t a killer melody to sell, as in Laura, but this polished score sounds good on Twilight Time’s Isolated Music Track.

Repeating from the DVD is the late Richard Schickel’s casual commentary. The original trailer now has an isolated music track as well. In his liner notes, Mike Finnegan reminds us that Gene Tierney had to work through her own troubles with mental illness. We’re also reminded that Preminger’s cool observational style doesn’t endorse any character over another, a moral neutrality that would become a basic guideline for his epics of the 1960s.

Reference and recommended reading: Otto Preminger The Man Who Would Be King by Foster Hirsch.