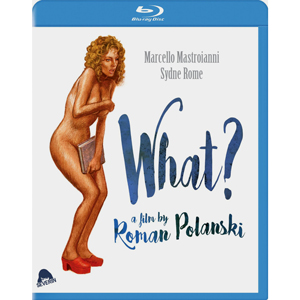 It’s a slippery slope, I tell you: art films are the gateway to surrealism, and surrealism connects straight to bondage and kinky costume play, which is a direct conduit either to Comic-Con or being forced to resign from the P.T.A..  I suppose that women are attracted as well, but grown male artists definitely seem drawn to this kind of cinematic hanky-panky. That’s a cue for the great director Roman Polanski, who approaches a sex romp in a rather frisky — or suspicious? — mood.

Severin released a Region 2 DVD of this film seven years ago, so it’s almost a surprise that it would follow up only now with a Blu-ray for the domestic market. There are still a few Polanski holdouts on disc… I’d still like to give Pirates another chance, some day.

This production was barely screened in the United States. After the personal tragedy he suffered in 1969, Roman Polanski’s next two films seemingly plumbed the extremes of his life experience. His 1971 Macbeth was a literal bloodbath that brought all of Shakespeare’s off-stage slaughter front and center before his  camera. Reviews couldn’t help but theorize that Polanski was exorcising his violent demons — or indulging them.

Polanski’s next film, produced by Carlo Ponti and set in sunny Italy, went in an entirely different direction. Italian movies of the early 1970s were awash in previously forbidden nudity, in everything from grisly horror films to insipid sex comedies. Polanski and his writing partner Gérard Brach set out to make an absurdist sex romp to top them all, an erotic version of Alice in Wonderland. What? (Che?) stars the pixie-ish Sydne Rome (La ragazza di latta) as Nancy, a hitchhiking American tourist. Nancy evades a trio of rapists by riding a private cable car to a lavish villa perched on a sunny Italian cliff. Unable to communicate with the servants, Nancy is accepted by the male residents as something lovely that’s drifted in. Everybody’s either too self-absorbed or too intent on sex to listen to Nancy, and she’s too polite to insist that they do. Whenever she falls asleep, another article of clothing disappears. Until she finds an errant pajama top in the hallway, Nancy is forced to walk around with her diary over her chest.

It takes this nubile Little Girl Lost a couple of days to realize that the villa is owned by the aged Joseph Noblart (Hugh Griffith), a shut-in attended by a German nurse while his hedonistic offspring indulge their various eccentricities. Two cheerful sons live upstairs. One cooks while the other engages in constant sex with a female we never get a clear look at. Mosquito (Roman Polanski), an odd fellow with an unclear relationship to the household, sleeps in a hammock and pulls practical jokes on the other two. Meanwhile, various hangers-on wander through the villa, showing up for the pleasant meals served on the ocean-view porch: a disapproving priest (Guido Alberti), a statuesque French nudist and her companion, and various non-communicative workmen. Without provocation, a painter paints one of Nancy’s legs blue. Middle-aged Giovanni (Romolo Valli of Giù la testa) calls Nancy a whore but then plays a piano duet with her.

Nancy’s main attraction is Alex, the tall and handsome son who wastes no time seducing her. Alex’s brothers say that he’s a pimp with VD, and that his mosquito bites are really syphilitic sores. Alex cops only to the pimp charge, insisting that that part of his life was all over a long, long time ago — seven months. Nancy responds positively to Alex’s infantile sex games, which involve dressing up in a tiger skin and a gendarme’s uniform. Nancy also seems unaccountably tolerant of Alex’s violent tendencies. He asks her to whip him and slaps her several times. On the beach Alex cuffs Nancy’s wrists to her ankles and whips her bare bottom with a painful switch. That’s not so much fun.

What? is billed as a comedy but proceeds like a half-dreamed nightmare, sort of Kafka-lite with a heavy dose of eroticism (but no on-screen sex per se). Roman Polanski’s notion of comedy has always been more of an uneasy affinity for the absurd. His film school shorts from Poland bear this out, especially Two Men and a Wardrobe, and his mordantly amusing Cul-de-sac quickly divides audiences. The Fearless Vampire Killers has few big laughs, yet was foolishly marketed as a comedy; it straddles the line between the amusingly weird and the weirdly unsettling. Polanski’s later absurdist efforts, particularly the expensive flop Pirates, pleased nobody. Yet his bizarre The Tenant often blurs the line between horror and comedy.

What? surprises us with completely unexpected developments, and if laughter results, it’s likely to be a residual side effect. When that crazy painter slaps a broad blue stripe down the back of Nancy’s naked leg, it’s really one more mini-tragedy — she’s just lost her pants to some practical joker and has been wandering around the house practically nude for two days. The funniest bits are throwaways. An ancient, senile housekeeper just stares when Nancy tries to ask questions. Thinking that Nancy is complaining about mosquitoes, the woman reaches for the wrong aerosol can and sprays shaving cream all over the room.

The movie encourages creative interpretation. The private cable car is the equivalent of Alice’s rabbit hole, and the people she finds in the villa exhibit definite Lewis Carroll behaviors. Her wanderings through the house’s long corridors are similar to other ‘vulnerable’ explorations in Polanski films, especially The Fearless Vampire Killers. And of course, a large wardrobe figures prominently, if only as a possible hiding place for Nancy’s missing clothing. Nancy has two separate encounters with Giovanni in which they talk about the same things (arthritis, young women without morals), ending up with the two of them playing the same classical music on the piano. Nancy is acutely aware that she’s in a deja vu time trap, but Giovanni won’t listen to her. A less sinister variation on the same pattern happens in a repetition of Nancy serving Alex coffee, after which he crushes a ping-pong ball. The isolated villa with its strange inhabitants acting out private obsessions — sometimes repeating them — bears a structural similarity to, of all things, Danse macabre, a haunted house movie in which damned souls reenact their worldly sins.

What? is airy, light and maddeningly illogical.  Its sunny villa is as anti-Gothic a location as one could imagine. Nothing makes sense to Nancy, especially not Alex. Marcello Mastroianni plays him as a somewhat infantile, aristocratic slacker. Wide-eyed Sydne Rome, with her curly hair and unavoidable body, transcends expectations with her easygoing acceptance of the insanity around her. The part was described during casting as “Little Annie Fanny” but Nancy is not that far removed from a certain kind of adventuress of the day. Rome is perfectly natural when reacting with puzzlement to various indecent requests from the libidinous cast — but she also cheerfully obliges old Joseph when he asks her to bare various body parts. Roman Polanski makes the scene play as something positive and generous.

Don’t get me wrong — although none of the sex is graphic, the movie can get plenty lewd.  The very first scene features an attempted gang rape and an accidental act of sodomy, played for a laugh. It’s a beautifully made movie, but not exactly one to take home to mother. 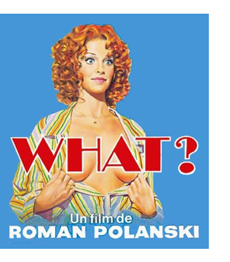 Severin’s Blu-ray of What? is a carefully remastered scan of this ‘naughty bit’ of fringe European filmmaking, in glowing soft colors. Polanski chose the Todd-AO camera system with its excellent lenses. His cameramen had worked for Sergio Leone and Gillo Pontecorvo and his art director had put together Riccardo Freda’s The Horrible Dr. Hichcock. That house by the sea is an incredible dream setting, in itself worth the price of admission. The movie looks like it was made all on location, but a title card mentions filming at Cinecittá, and we know how well Polanski can fool us. The moon shows up in a lot of shots, and it’s not easy to tell whether it’s a special effect.

The film source material is different than Severin’s Region B release of eight years ago, when the cutaways to Nancy’s diary pages were in Italian. This is the English language version, which makes sense because Nancy speaks English and there’s a lot of Italian dialogue she doesn’t understand, and is not subtitled. The disc has no subtitles, actually, which is something of a demerit around Savant headquarters. Deaf and hearing-impaired viewers like dirty art movies too!

Severin’s extras are repeated from their Region B release. An original trailer is present, along with three featurette docus. Sydne in Wonderland is an interview with the actress, who still has a twinkle in her eye. She remembers the film as a joyous experience and recounts how she ‘kept her name alive’ in the production offices to secure her part in the erotic comedy. Other interviews cover composer Claudio Gizzi and cinematographer Marcello Gatti (The Battle of Algiers, Queimada!). We’re told that the art masterpieces gracing the walls of the film’s fabulous villa were from the collection of producer Carlo Ponti. He reportedly delivered the paintings in the morning, and then, after filming wrapped every night, took them home!

The last surprise — the print on display bears a new copyright, assigning ownership to Severin Films.