There’s nothing so good as being able to consult people who know more than we do, who deal in facts and can back up their assertions with proof. The excellent new Blu-ray for Monster from Green Hell has a nifty color sequence at the end which raised a lot of questions and wrong guesses. Thanks to prime source evidence, we can show you how the original looked … uh, after a little Eastmancolor fading. It’s what passes for an Article of Importance at CineSavant, the usual display of breathtaking journalistic originality. 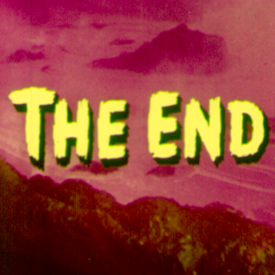 What Color is Green Hell?
CineSavant Article
The Proof is in.

This article is an addendum to the March 8 Blu-ray review of The Film Detective’s Monster from Green Hell, a fun creature feature released in 1958 but likely filmed more than a year earlier. It’s a rather good disc despite not being mastered from pre-print material — a few scratches, missing frames and a trimmed shot are in evidence. But it’s clean, bright and looks and sounds far better than the much earlier DVD. I recommended the disc for genre fans.

The (non?) controversy is with the film’s ‘color’ conclusion. The disc gives us an ending that looks somewhat faded — or oddly painted. The fact that the disc text uses the word ‘colorized’ and doesn’t mention finding a rare color film element, led me to assume that the finish really was colorized, that the rights holder had gone to the trouble to approximate the original by colorizing a B&W print. It doesn’t look bad at all; it gives the finale a welcome punch.

Here’s what I wrote in the review:

The Film Detective’s ad copy reads, “FEATURING A RARE COLORIZED CLIMAX.”  Are we meant to take the word ‘colorized’ literally?  It also suggests that the film rights holder only had B&W film elements, and indeed digitally colorized this last sequence.

The two reference sources I was able to access weren’t much help. Each described different color than what appears on The Film Detective disc. According to the AFI catalogue:

“Although the print viewed was in black-and-white, the climactic volcano eruption sequence originally contained some color stock footage and color toning effects on the new, intercut black-and-white footage. B&W with col seq.”

On the new disc the volcano stock footage is tinted, and the new footage of the actors appears to have originally been filmed in color. The AFI says the opposite was the case, as does Bill Warren in his reference book Keep Watching the Skies. Warren was even more specific about the film’s original color:

“At the climax, the film sort of turns to color, to use color footage of erupting volcanoes. It’s a confusing welter of disconnected images: volcanoes (in color), wasps, and our heroes observing from a ridge. The footage shot for the film is not in color, but tinted a hot pink.”

Is it possible that the AFI got its information from Bill Warren?  The suggestion that the volcano footage was the ‘full color’ content prompted us to study the montage again. I’m convinced that Al Zimbalist and DCA lifted the volcano footage from DCA’s previous import release Rodan!  The Japanese shots are partly disguised by being superimposed over each other in the curious dissolve montage.

That’s why I originally concluded that the disc producers colorized a B&W print. Rather than shout, ‘we’ve recovered the lost original color footage!’ they slipped the word ‘colorized’ into the text and make no other claim beyond calling the color conclusion ‘rare.’ 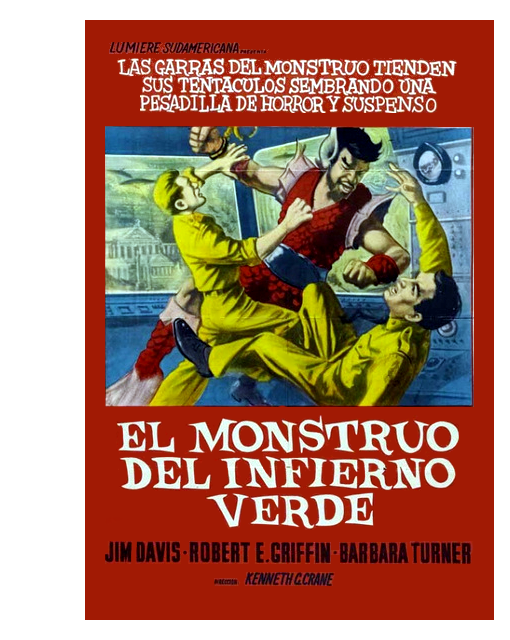 Those conclusions were contradicted almost immediately, from a reliable and trusted source. I already had the attention of Robert Furmanek and Jack Theakston, the restorers, format experts and film collectors of the 3-D Film Archive, because I wanted them to give me information about their lastest project, an upcoming restoration of the Abbott and Costello movie Jack and the Beanstalk. They offered corrections and information on Green Hell just to be helpful.

Bob Furmanek could have just written, ‘no Glenn, it’s not colorized’ and left it at that. Instead he sent me this eye-opening note. It contradicts me, it contradicts the AFI and Bill Warren, and it partly contradicts what’s on the disc.

Hi Glenn, I hope that all is well. I just read your review and here’s what I can tell you about the color ending. It was originally a combination of tints and actual color. The cave scenes were tinted blue and the torches were yellow. Jack could explain further how that effect was achieved. There is a poor quality copy on YouTube with those sequences. While it might appear to be video trickery, a friend with the memory of an elephant saw Monster from Green Hell first run in 1958 and distinctly remembers that sequence on the big screen. 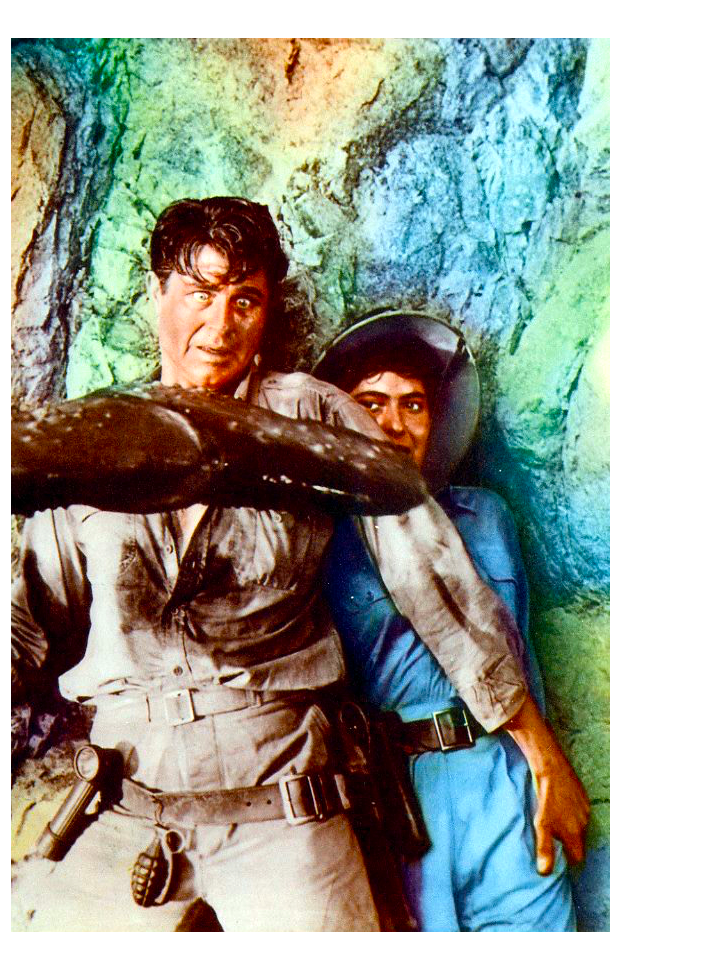 After they get out of the cave, the reaction shots of the cast are in full color against tinted volcano and special effect shots. I once had a 35mm print with those scenes and while it was very faded, it contained actual color shots of the cast.

Back in the mid ’80s when I worked for Jerry Lewis, I did a walk-through of the abandoned Movielab on Santa Monica Blvd. Scattered among the tens of thousands of orphaned film elements was at least one single thousand foot can on Monster from Green Hell labeled “color ending.” Sadly, I was not able to secure it.

To add to the confusion, not all 35mm prints had the tinted cave scenes (with the yellow torches) as mine was straight black and white. Hope this helps! Best, Bob.

Bob followed up with a LINK to the YouTube encoding by Richard Ekstedt of the ‘RARE COLOUR CLIMAX’. It appears to be from an original print, and it’s quite different from the Film Detective disc.  The film’s entire last reel appears to have been printed on color film stock.

The YouTube transfer is very blurry, and it’s hard to make out details in the montage. From what I can see the image goes ‘blue-ish’ after the grenade explosion seals the tunnel. The torches they light in the dark blue tunnels are indeed in bright yellow. I’m guessing that the selective color printing trick was something like the antiquated Handschiegel Color Process, the method seen mostly in silent movies like Wings. The 1932 The Vampire Bat uses the process as well. I included an image of its torches in my review.

On the Ekstedt YouTube encoding the exterior volcano scene looks mostly all tinted red, not just the volcano footage. You wouldn’t know that the live-action scenes with the actors were original color cinematography. Not only that, the entire color end on the YouTube version has been flopped for some reason, all except for the End Title shot. It does have more (very blurry) picture information on the sides. 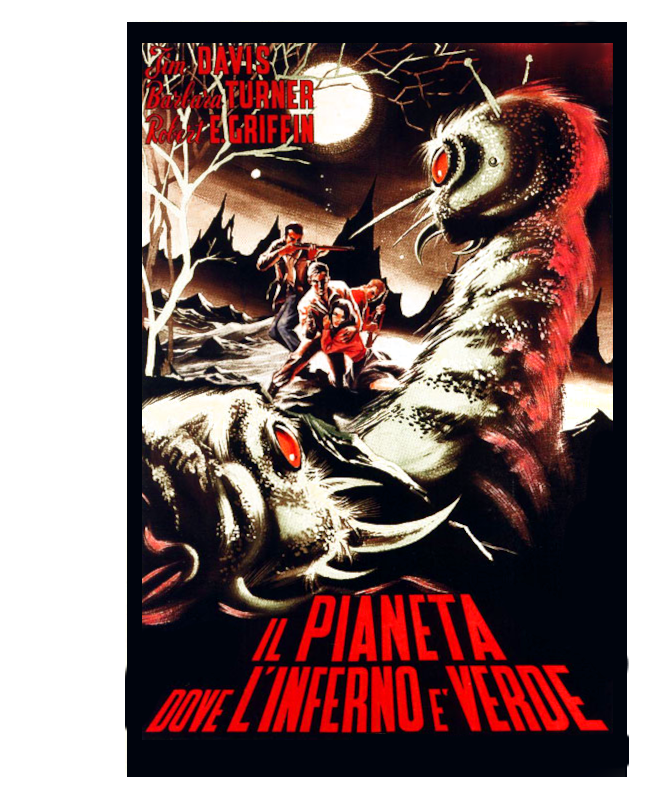 Bob and Jack Theakston began exchanging more emails, and in the discussion was an unexpected bit of information: Bob Furmanek had indeed once owned an original 35mm print of Monster from Green Hell. Before he sold the print, he and Jack made some frame scans from the color end sequence.

Jack, do you still have those frame scans we did before the print deteriorated with vinegar syndrome?

Glenn, The scans are on some ancient drive now, so I’ll see if I can find them, but Bob’s memory is correct. The end section lasts no more than two minutes and was on Eastman Color stock. My recollection is that the shots of the four of them peering over the hill were real color, but the shots of the giant wasps were B&W that were tinted blue or purple. The old Bert I. Gordon grift of putting a color tag at the end of the film to try to trick the kiddie audience into thinking they’d just seen a color feature.

Bob’s print did NOT have the hand-colored torches. Sadly, the person he sold it to informed me a couple of years ago that the print had deteriorated into a brick, and even the last couple of minutes were unsalvagable. I made a list several years ago of genre films that were B&W but employed colored effects like cut-ins or tinting… if I can dig that up, I’ll send it too. Best, Jack.

They actually saved scans of the rare sequence.

Finally, later on the same day Bob Furmanek located a folder with 9 color scans they’d made of the original color ending before parting with the print. I’m printing them here without alteration. They’re somewhat bigger than these thumbnails, and enlarge when zoomed or opened in a new window. 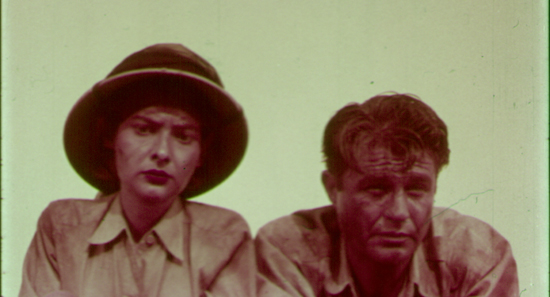 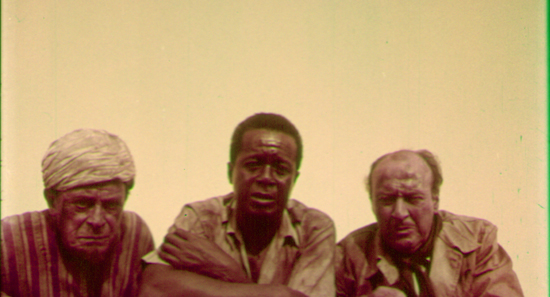 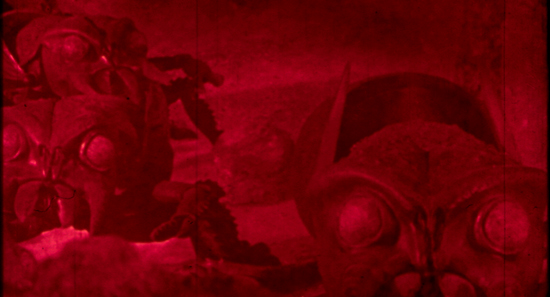 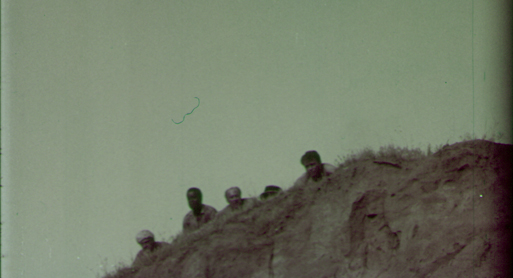 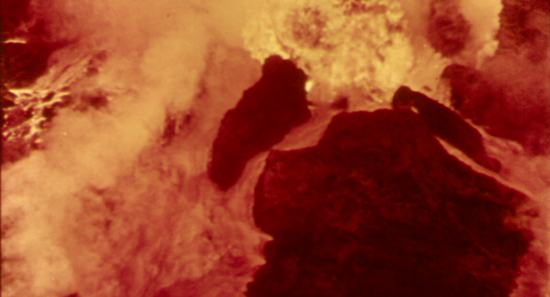 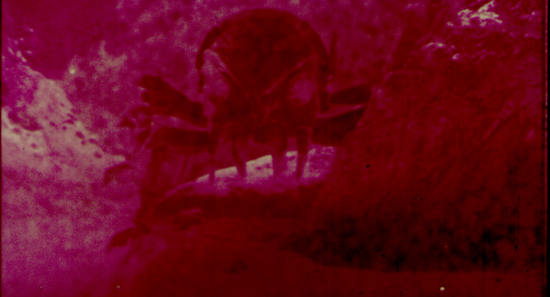 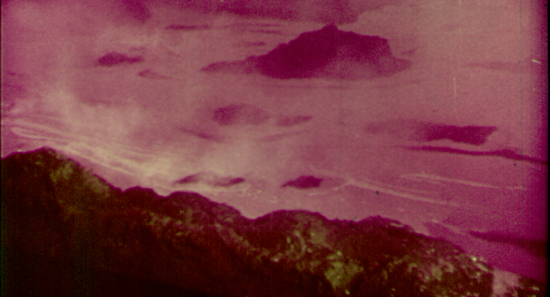 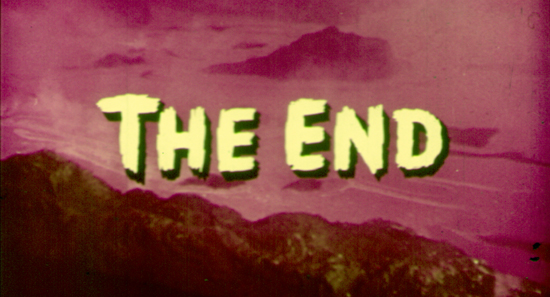 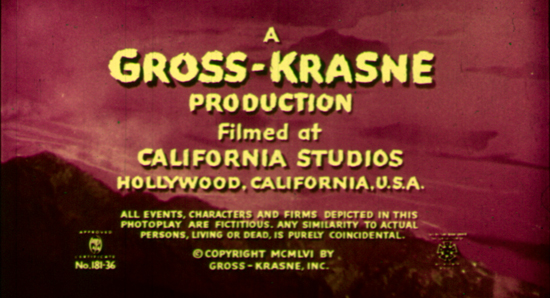 Not bad, huh?  I like that Bob and Jack automatically gave their scans an appropriate 1:85 crop. Jack identifies the print as being in Eastmancolor, so normal fading accounts for the greenish sky tone — blue is the first color value to go. The red ‘layer’ is closest to the film base, and fades last.

The Film Detective disc does have similar color values on the live-action footage, but its volcano shots aren’t nearly as brightly colored. Everything is different on the strange YouTube video as well. Since even Bob Furmanek’s print had surely faded, our curiosity leads only so far even when the exact evidence we need falls in our laps.

Thanks to the gents at the 3-D Film Archive for once again coming through with authoritative answers. It’s been due to Jack and Bob that I can state with confidence what Aspect Ratio goes with which feature film:  when they make a claim they back it up with real documentation, not just something from a studio pub handout or quoted in a review.

And what are the odds that they would tuck these scans away, for who-knows-what possible future use?  Furmanek and Theakston must be sitting on an Ali Baba’s cave of exotic filmic delights. Maybe I should casually say, ‘Gee Bob, have you seen your copy of the long workprint for Major Dundee lately?’

And kudos for The Film Detective too. I don’t label the makers of Monster from Green Hell as schlockmeisters or charlatans congratulating themselves at how they ‘put one over’ on the suckers in the audience. Good movie or bad movie, this show got a major release and is still entertaining people 64 years later. Thanks to all concerned for putting out an improved encoding on Blu-ray.