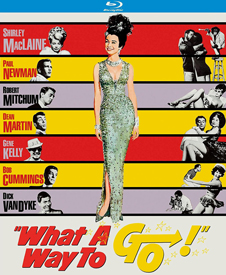 Want to know what the producer of Planet of the Apes was up to, before that milestone movie? Arthur P. Jacobs was an agent for big stars before he became a producer, which positioned him well for his first show for 20th Fox, What a Way to Go! The front office’s idea of a black comedy is really a celebration of star Shirley MacLaine, a fairly consistent moneymaker then just off of Billy Wilder’s biggest success, Irma la Douce. Written by musical comedy legends Betty Comden and Adolph Green, this all-star ramble was reportedly concocted for Marilyn Monroe. As with a stack of ‘big star’ Hollywood romps of the period – such as The V.I.P.s and The Yellow Rolls-Royce, What a Way is fairly pointless. It’s also not particularly funny, but avid movie star hounds may want it anyway. Shirley MacLaine keeps the entire enterprise afloat with her bright personality. It’s amusing to see the six male leads shape up to the task of supporting their leading lady. 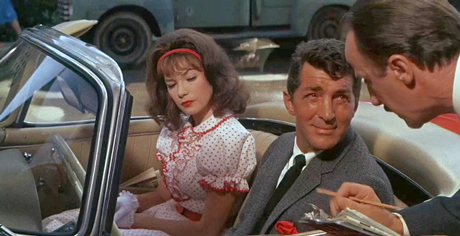 For their last feature film script, the famed Comden and Green team dress up a stiff idea that makes the most frivolous ’30s screwball comedy seem sophisticated. Simple country beauty Louisa May Foster (MacLaine) is pressured by her mother (Margaret Dumont!) to marry the rich Lennie Crawley (Dean Martin), an obnoxious and prepossessing playboy. She instead falls for free spirit and business failure Edgar Hopper (Dick Van Dyke) and is happy to live with him in carefree poverty. But a freaky pattern soon shows itself. Louisa inadvertently motivates Edgar to become a monster success, and he drives himself to a sudden, early grave. Inheriting Edgar’s fortune, Louisa moves on to Larry Flint, an expatriate painter in Paris (Paul Newman), then to Rod Anderson Jr., a blasé tycoon who has forgotten how to smile (Robert Mitchum), and Pinky Benson, a sad sack nightclub entertainer who doesn’t want to be famous (Gene Kelly). In each case Louisa’s presence changes her husband’s outlook, he grows several times richer and then dies. It’s all done in silly farce terms, with Louisa’s efforts to remain poor and happy thwarted at every turn. Machines that paint turn the phony lazy artist Flint into a phony rich artist, with pretensions. Louisa’s distraction keeps the tycoon Rod from concentrating on his work, which only makes him richer. And Louisa’s suggestion that entertainer Pinky ditch his clown costume and be himself, turns him into an insufferably boorish instant movie star, who paints everything he owns pink to match his name. Poor Louisa spells out this tale of woe (and incredible riches) to her psychiatrist Victor (Bob Cummings), who naturally wants to marry her as well.

A Hollywood cliché is that movies in general celebrate instant success and unearned rewards. What a Way to Go!’s featherweight storyline pretends to satirize empty glitz and grandiosity yet is itself a monument to the same. Were it even a little serious, it would be offensive. All roads lead to success, and the only success acceptable is the kind that comes with lavish material rewards. Eighty years ago Joan Crawford seized the attention of every woman in America when she played deserving shop girls that find a path, one way or another, to true happiness. That goal invariably involved designer clothing, fabulous hairstyles and makeup — all the things that ordinary girls are supposed to want. Making fun of its own supposed moral lesson, What a Way to Go! is a lampoon of Hollywood excess that forgets to be critical.

The film’s real subject is its own glamorous excess, all presented in good humor. The sheer number of costumes and hairstyles is phenomenal. Louisa changes fashions every couple of minutes, starting out as a convincing twelve year-old in a Dorothy Gale dress and giant freckles on her face. Several of the marriage episodes include comedy bits stylized as old movies, as when Louisa and Edgar’s home life portrayed as a silent movie, with Dick Van Dyke doing a Charlie Chaplin pantomime. When the time comes for the Robert Mitchum movie spoof, MacLaine’s Louisa spends six minutes in an overdone ‘Lush Budgett Production,” changing her lavish gowns in every shot. And they aren’t simple dresses, but crazy Edith Head creations, many of which are wildly impractical. The movie is ninety minutes of Shirley MacLaine performing as a cheerful paper doll, with perhaps fifty of these fancy wardrobe changes. Her hairstyles vary wildly as well… with all the work involved, its surprising that she had any hair left when she was done. 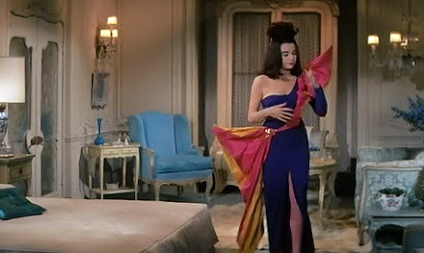 The picture now comes off as amusing but not really funny. A number of MacLaine’s comedy features are real dogs (All In a Night’s Work comes to mind) but Shirley herself is consistently winning, as seen right from the start in her Hitchcock movie and her Jerry Lewis comedy. Even when things get really dumb in this show, Shirley comes out on top. Paul Newman’s episode is an almost complete wash. This must be the 99th movie to try to make jokes about modern art being painted by a Chimpanzee, and Newman had already played the American artist in Paris more than once. The supposedly sexy ‘foreign movie’ gags plaster big ‘censored’ flags across the screen, as in a cartoon. Dick Van Dyke’s character is an insubstantial cartoon. When he tried to do more adult comedy, the fit didn’t seem right. He’s so naturally likeable, that his fate in this show seems unnecessarily cruel. Van Dyke’s slapstick gag of getting splashed in a mud puddle is the one bit from the movie that’s persisted – as a quick cut in 20th Fox film clip montages.

Gene Kelly’s episode is an opportunity for the song & dance great to reprise elements from Singin’ in the Rain, which at the time was only twelve years in the past. Pinky Benson’s rise to fame includes a similar movie premiere (with a Singin’ stock shot altered for CinemaScope) and a large dance number that expands a shipboard setting from another MGM musical, Hit the Deck, to the size of a football field. Kelly’s choreography is a shadow of earlier work – what stands out most are Shirley MacLaine’s perfectly-formed dancing legs. Pinky’s sudden ability to charm audiences is unconvincing, another unexplainable twist of fate. The most successful gag in the episode is when Louisa tries to enjoy her pool (in a designer bikini, of course), which her egotistical husband has had painted pink. A pink-addled painter goes goofy and begins to chase her, like Harpo Marx.

Dean Martin’s sketch of the slimy businessman who owns an entire town is paper-thin, but since so many of his comedy characters behave similarly, we accept him easily enough. Robert Mitchum contributes the most surprising star turn. He must have liked MacLaine, or felt a duty to prove himself willing and cooperative. In itself his part is wholly thankless — his Rod Anderson mostly poses in tuxedos and provides an arm to escort Shirley through her twenty-plus costume changes in the episode. Mitchum was notorious for faking his way through movie assignments that bored him, but here he’s fully attentive. He also handles pages of dialogue at a time, and does quite well with it. He comes off as a total class act. 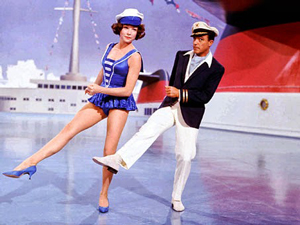 The silly show could be called ‘All About Shirley’ in that there’s no real chemistry between MacLaine and her six leading men; it’s just Glitz, the whole Glitz and almost nothing but the Glitz. Director J. Lee Thompson and the Fox studio people do a fine job keeping it all looking good and moving, perhaps by recycling a lot of standing sets. I think I recognized the ‘old mansion’ set from Please Don’t Eat the Daisies in there. I don’t know if women care now, but in 1964 the main interest must have been seeing what Shirley was wearing and how she looked.

The fact is that Shirley looks great at all times. Face it, she must have earned an ‘A+’ in Adorable School – I personally have never felt cheated by her particular brand of cutesy smiles. MacLaine’s most demanding scene is her dance bit with Gene Kelly. It may not be all that demanding, but it’s real dancing, the kind that can’t be faked in a few lessons. Yes, her legs are terrific but she also has real talent, as seen in her later Bob Fosse movie Sweet Charity. It makes a good comparison with this year’s Oscar darling La La Land, which deserves a Dancing Bear Award — we applaud not because the stars are dancing well, but because they are dancing at all.

The KL Studio Classics Blu-ray of What a Way to Go! is a good-looking encoding of this colorful picture. The opening logos are all tinted pink, to match the all-pink, unfunny slapstick interior scene behind the main titles. The colors are a little off there, but probably because the optical dupe negative faded differently. Everywhere else the colors look great, and the audio is bright and punchy.

The only extras are some trailers, including the original for What a Way to Go!