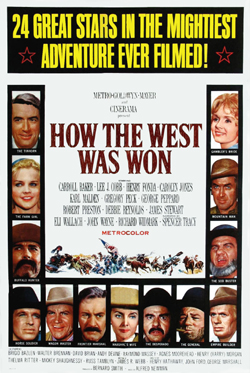 How the West Was Won

The second dramatic film shot in three-panel Cinerama, this sprawling all-star western epic came too late to save the process which was being replaced by a simpler single-lens system. Many action sequences were shot normally and converted to three-panel. By the time the brand-new Cinerama Dome in Hollywood opened in 1963 its initial “Cinerama” attraction, It’s a Mad, Mad, Mad, Mad World, had been made entirely without the three-panel process the theater was built to showcase. Great score by Alfred Newman.