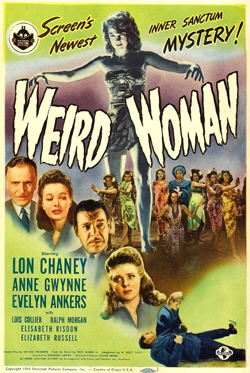 Fritz Leiber’s pulp novella “Conjure Wife”, which originally appeared in the April 1943 issue of Unknown Worlds, has had a surprisingly durable screen history. It was adapted here as the second entry in Universal’s Inner Sanctum Mystery series, then redone years later as an episode of the Moment of Fear TV show (1960). A classy feature treatment, Burn Witch Burn, followed in 1961 (see TFH Guru Sam Hamm’s take on it here). A barely released comedy version, Witches’ Brew, appeared in 1980.