Woo Hoo! We’re girl-starved teen nerds, and we’re cooking up our own living sex toy with our home computers! John Hughes turns an infantile idea into one of his not-bad teen angst comedies, as Kelly LeBrock materializes to fulfill their wildest dreams. The idea is of course transformed into a basically benign coming-of age story … with the underlying message that we’d not at all mind if Ms. LeBrock reformatted our hard drive. It all begins as a bad arrested-development joke, but Hughes’ audaciousness and fine production values make this a nostalgic favorite for folk that miss their (ugh) 1980s memories. 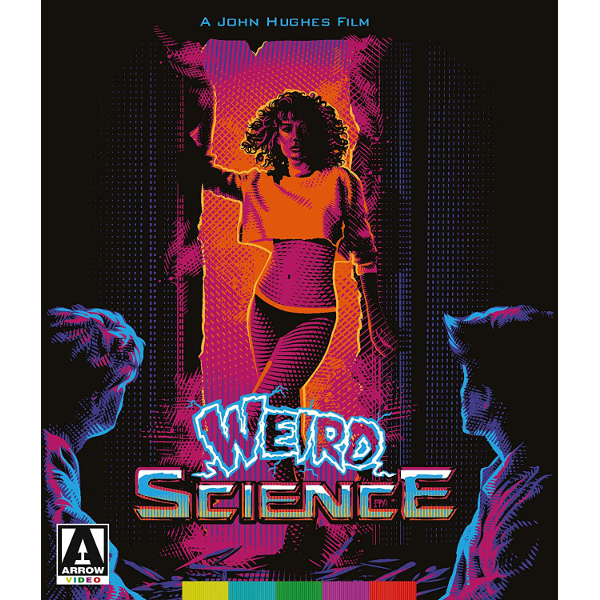 Coming smack in the middle of the 1980s, Weird Science is held up as prime nostalgia for a decade of youth comedies. Having scored with two lively, sentimental movies about upper middle-class kids learning life lessons, etc., John Hughes took his teen angst issues into goofball territory, with a supremely silly mix of wish fulfillment fantasy and slapstick irreverence. Two geeky male teens, sub-species nerdus loserus, solve their no- social life and no- sex issues by using a computer to create their own perfect fantasy woman. Surely all manner of X-rated tomfoolery could result, but, ah, no, this is a responsible wacky comedy that settles for a low-flow quotient of gnarly bathroom, tit & wanker jokes. Our essentially sweet boys then learn more John Hughes life lessons. Beautifully directed and performed, the show now reads as mainstream 80’s fun.

Gary Wallace (Anthony Michael Hall) and Wyatt Donnelly (Ilan Mitchell-Smith) are walking disasters in high school, uncool rejects humiliated by the girls and victimized by the boys, especially self-styled ladykillers Ian and Max (Robert Downey & Robert Rusler). Wyatt is also cruelly treated by his brutish older brother Chet (Bill Paxton). Inspired by a TV airing of the original Frankenstein, the boys hack into a defense computer and use its might to create a living sex doll of their own, which they name Lisa (Kelly LeBrock). Although the compliant Lisa is ready for anything, when confronted by the boys’ adolescent impotence, she takes it upon herself to skip the direct sex and liberate them from the purgatory of uncool- ness. She gets them drunk in an adult club and sets up a wild party that’s invaded by all manner of supernatural phenomena. It’s all a plan to make them bloom from their state of cringing cowardice. Of course, what the boys really need is to form relationships with girls their own age. The problem is that Deb and Hilly (Suzanne Snyder & Judie Aronson) are already attached to Ian and Max … who of course want to make a play for the drop-dead gorgeous Lisa.

The crude (but innocent) humor flies fast and thick in John Hughes’ featherweight comedy, which is too carefree to waste time with pseudo-scientific baloney. Gary and Wyatt ‘create’ Lisa in a flurry of charming silly-science, using an ’80s PC that still uses big floppy discs. The graphics on their computer monitor play like a carnival ride. The boys even hook electrodes onto a toy doll as part of the process. Lisa emerges from a smoky room, through a door that bulges like a scary portal in Poltergeist. She has fantastic, fuzzily-defined powers — she conjures Porsches and Ferraris out of nowhere, and transforms Wyatts’s parents’ house mansion into a whirlwind of craziness — turning an entire room blue, sucking all the furniture and a woman out the chimney, and spearing an ICBM missile (from the defense program?) right up through the floor. The boys are so cowed that they try to hide in the bathroom ’til their own party is over. To make them come out of their shells, Lisa conjures Mad Max– like mutant bikers to crash the party. She reasons that there must be some &%#@ these boys won’t take lying down.

Producer Joel Silver’s top production values include a catchy title theme by Oingo Boingo. The kid actors are geeky but charming. Anthony Michael Hall in particular shows star chops, carrying the movie in all but one scene. Perhaps riffing off Animal House, writer-director Hughes has Lisa take them to a predominately black nightclub, where Hall’s Gary gets drunk and ‘goes all black,’ whining in faux- jive patois. The movie almost crashes right here — Hughes hasn’t a clue how to get something amusing out of the white-bread boys in this situation. The ‘confront the parents’ scene also fall a bit short — Gary’s folks are almost too exaggerated to fit into the storyline.

Kelly LeBrock is marvelous, for the reasons pointed out by Arrow’s #metoo- inflected essayists. Lisa’s Alpha-female lamia is in control of everything. She has it handled at all times, in all situations, and not just because LeBrock possesses the beauty and style that intimidates 90% of men. Hughes allows enough sweetness to come through. She’s never oppressively attractive; her appeal has no “I’m cool and you’re not” component.

You didn’t think I’d skip the usual CineSavant theory about genre origins, did you?  Not long after the ratings system was adopted, at 17 years of age, I was slipping out to the Air Base theater to see movies, including the new ‘mature’ rated films. One was The First Time (1969), a terminally annoying picture in which three jerk teens decide to pool their money and hire a prostitute. The day rental girl turns out to be the intensely attractive, ridiculously unlikely Jackie Bisset. Her character does more or less the same thing that WS’s Lisa does, teach the horny boys a life lesson about relationships. Later in the ’70s there came along trashy movies that flirted with ideas of underaged sex. In Zapped! (1982), adolescent Scott Baio acquires telekinetic powers that, among other unfunny gags, enable him to molest girls from afar.  Early cable TV was all over a sleazy ‘comedy’ called Private Lessons, about a rich boy, perhaps twelve years old, that sexy housekeeper Sylvia Kristel does indeed seduce (thank you, “B”). Weird Science is practically a remake of Risky Business (1983), where the ultra-sexy Rebecca De Mornay is an equally powerful temptress for a kid who dances in his underwear. Add the fantastic comedy of Ghostbusters (’84) and John Hughes’ affinity for teen angst, and that’s WS exactly.

The film’s teen girls are cute, and it’s fun to see future superstar Robert Downey Jr. as one of the punk bullies, dispensing his brand of slick charm. Among the supernatural bikers is Michael Berryman, for once given a chance to be amusingly endearing. I think it’s his most popular movie appearance.

Showing impressive acting chops is the late Bill Paxton. He’s frighteningly overbearing as Wyatt’s terminally obnoxious older brother. Paxton’s exaggerated facial expressions belong in a horror comic, which is (sort of) the source for this movie … ‘Weird Science’ was a ’50s comic book by Al Feldstein and William M. Gaines. Paxton ‘stars’ in the film’s most elaborate makeup effect, when Lisa teaches him a lesson by transforming him into… you have to see it to believe it.

As in core John Hughes, the kid relationships all turn into sweetness and light, which may or may not get our boys’ minds out of the gutter. Hughes’ best trick was reintroducing the concept of sentiment into snarky teen comedy. As this was the 1980s, the miserably selfish problems of these Brat Packers are presumed to be universal. And as cynical I am, the kids are basically innocent, so I guess they get a pass. Weird Science is still primarily a nostalgia item, but Hughes should have received extra credit for taking his unpromising story idea to this entertaining extreme.

Arrow Video’s Blu-ray of Weird Science is a fine 4K restoration. Soon after studios began licensing films to outside boutique labels, we heard about this or that company doing their own restorations. But it isn’t like the owner of Arrow is driving an original negative around in his car — the film materials still circulate between the same labs and specialty restoration houses. WS is in fine shape, and Arrow’s restoration looks great — the high production values come through loud and strong. Some of the scenes from Frankenstein are shown in a colorized version, a process that’s its own time capsule from the 1980s. The film’s ‘sophisticated’ computer graphics are endearingly primitive, much more so than the ridiculous CGI representations of cyberspace seen in the movie Hackers exactly ten years later.

The pristine encoding prompts us to commend the show for its tasteful handling of Kelly LeBrock — she’s dressed, coiffed and lit beautifully at all times, and not even her supposedly edgy costumes are in bad taste. 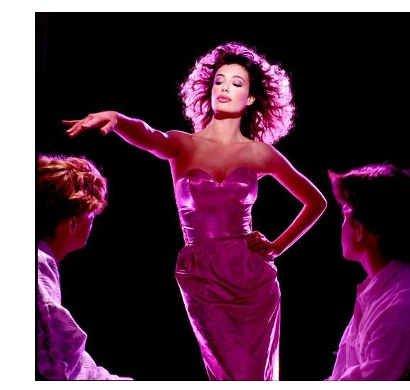 Arrow gives viewers everything one could want from this movie. In addition to the theatrical version, an extended cut adds about three minutes, with two more scenes. Unfortunately, neither is the legendary passage in which the teen villains are transformed into a jackass and a pig, like the ‘bad boys’ in Disney’s Pinocchio. The disc also offers the film’s sanitized TV cut.

Makeup specialist Craig Reardon makes one of his best extra-value appearances, showing his raconteur skill with the story of how the Chet-monster was created. The talk includes a nice profile of actor Bill Paxton, and Craig gets to explain how difficult it was to manage job opportunities while being bounced back and forth between various superstar filmmakers. I hope Craig got to work on the set with Ms. LeBrock — he always called this film one of his happier experiences.

Contemporary feminist critics were openly hostile to this movie, to say the least. The essays in Arrow’s booklet are by women writers that stretch for ways to spin this essentially old-school male-oriented fantasy as gender-progressive. They also discuss the vintage horror comic story that inspired the movie.