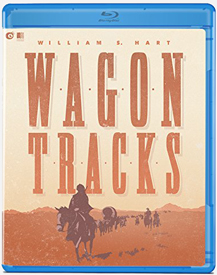 Last year we were gifted with an excellent Blu-ray of a silent John Ford western, 3 Bad Men, which turned out to be a satisfying sentimental action tale. This month we get a much older silent western that’s almost as interesting. Its star is William S. Hart, the silent icon most of know through a still of a man in a ten-gallon hat brandishing two pistols in a barroom. Hart frequently played gunslingers, but not always. Olive’s presentation of Wagon Tracks sees him as a buckskin-clad mountain man and wagon train trail guide. His headgear is a headscarf that makes him look like a Basque shepherd. Made in 1919, the show is a star vehicle with numerous opportunities for Bill Hart to emote. 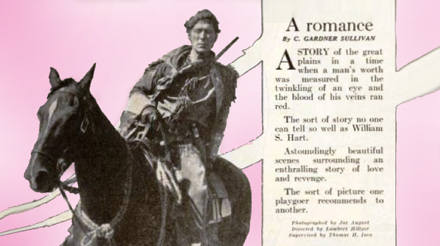 Ornate inter-titles tell us that this is a story of the Santa Fe Trail, in 1850. Buckskin Hamilton is (William S. Hart) camped with his mule and horse, his best companions. He’s en route to Westport, a landing on the Missouri river that’s a jumping-off point for wagon trains starting the westward journey. Buck is going to meet with his little brother Billy (Leo Pierson), who has just graduated from medical school. But the night before his riverboat docks, Billy is killed in a fight with two cheating gamblers, Donald Washburn and Guy Merton (Robert McKim & Lloyd Bacon). Guy is engaged to Donald’s innocent sister Jane (Jane Novak) and the two conspire to make her think that she killed Billy in an accident. The sad Buckskin takes charge of a wagon train that includes Merton and the Washburns. The pioneers lose a wagon and suffer a shortage of water, and are concerned about the Kiowa Indians they meet. Jane eventually tells Buckskin of her suspicions of her male companions, and Buckskin decides on a harsh method of getting them to confess. 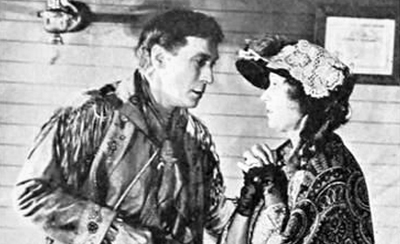 Wagon Tracks is a full-fledged wagon train story made long before the classic entries of the later silent period, and the many sound-era big titles that began with The Big Trail. We see many long shots of a string of ten or so wagons moving across a landscape that’s mostly desert, and probably filmed near Joshua Tree, and perhaps in the Mojave. There’s no mention of the Gold Rush or preaching about farming or religious freedom as in John Ford’s Wagon Master. That’s a job for a few flowery inter-titles. One hand-lettered homily openly calls the wagon train a, ‘White-sailed armada of an unconquerable race.’

The inter-title cards billboard our idealized hero Buckskin Hamilton as ‘A true son of the new frontier.’ For lack of anything else to do, Buckskin coddles his horse and mule. At one point he tells them that he won’t go to heaven unless they’re allowed to come along as well. William S. Hart was known for his long, serious face and deadeye stare. After a few minutes, he begins to resemble a mule. Already fifty-five years of age, the New York-born actor is an expert player, and director Lambert Hillyer (Dracula’s Daughter, The Invisible Ray) keeps him screen center most of the time. The scenes in which Buckskin breaks down over his brother’s body are milked for maximum emotional impact. With the guilt-stricken Jane and her shifty companions looking on, we know that the rest of the movie will be about getting payback. 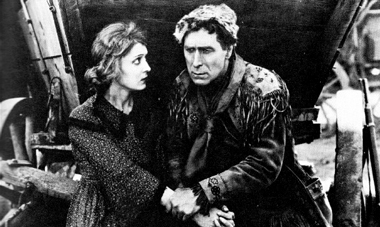 Wagon train movies typically introduce a major problem every few minutes. Before the Indians show up, Buckskin has only a lack of water to deal with. He instead concentrates on settling his personal score. The drama underscores basic beliefs presumed held by the American audience in 1919: the country belongs to the White Race and Vigilante Justice is a perfectly fine way to resolve problems. Buckskin marches Donald and Guy into the desert and makes them walk without water for two days, until they break down and start ‘telling the truth’ about what happened on the riverboat. He gets what he wants, but basically through torture.

The pace is brisk and the cutting basic. Interestingly, the show intercuts some ‘darkie’ blacks on the riverboat singing a song about being sad, with Jane’s post-killing remorse. It’s a full-on musical interlude without the music. The movie is unaware of its own racism. The term ‘white’ is synonymous with virtue, and also distinguishes the Anglos from the Kiowa primitives they meet on the trail. The wagon train is more or less unarmed, and the Indians arrive and wander about, taking a few souvenirs without asking. A fight breaks out and an Indian is killed, which sets up the third act dilemma. When the chief demands a life for a life, both the leader of the train Brick Muldoon (Bert Sprotto) and Buckskin feel it’s their duty to sacrifice themselves for the train. The White Race is also brimming over with noble gestures. 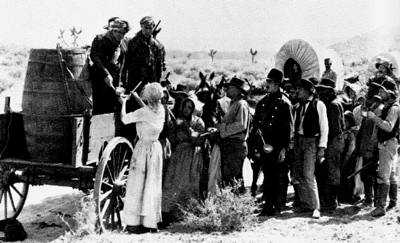 With Donald’s confession, Buckskin gives him the choice of shooting himself or being delivered to the vengeful Kiowas. Of, course, things work out so that technically nobody condemns anybody, and rough justice results ‘by accident.’ At this point the storytelling becomes a little confused, as Donald runs away and both Buck and Brick get set to wander off to the Kiowa camp. What if all three of them were captured?

Wagon Tracks’ screenwriter C. Gardner Sullivan contributed to William S. Hart’s big title Hell’s Hinges, Gloria Swanson’s Sadie Thompson and the classic All Quiet on the Western Front. The handsome cinematography is by Joe August, the genuine movie legend who shot some of the most artistic shows of the ’30s and ’40s. The picture has a very good look, especially with the original tinting restored.

Now obscure except to fans of silent westerns, the frail-looking Jane Novak had a long career playing opposite most of the big stars of the ’20s. Thirty years later, she was still playing small parts in Paramount pictures. Three years later, actor Lloyd Bacon would switch to directing, and continue in the biz for three full decades more, signing his name to quite a few well-remembered pictures — 42nd Street, Action in the North Atlantic, It Happens Every Spring.. 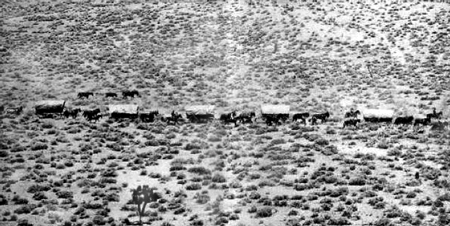 The finish finds Buckskin once again alone on the trail, like so many classic western heroes to follow, from Harry Carey to Randolph Scott. Jane asks Buck if she’ll see him again, and his response is typically terse: MEBBE. The inter-title text reads a lot better than the same words would sound in a narration: Buckskin is ‘the Empire Builder riding alone to the frontiers of the morning to meet the future and bid it welcome.’ 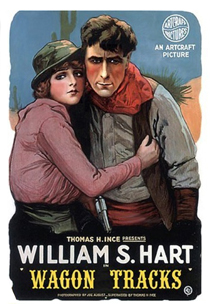 Olive Films’ Blu-ray of Wagon Tracks is a handsome, well-preserved encoding of this 98 year-old western. It’s in great shape. The original tinting comes across without additional grain. I did notice a very slight ride on splices, which makes sense in that a film this old was likely hand-spliced in those days, without benefit of a hot-splicer. Frames immediately adjacent to splices tend to be soft. It’s all but invisible unless one changes the playback speed. Everything else is as sharp as a tack, including the inter-titles, which are originals and are not frozen frames. Every title card has an illustration – illumination graphic, a little work of commercial art.

The show has been given an original music score by Andrew Earle Simpson. There are no extras, which is too bad. Had he lived, author, movie expert and silent movie authority Robert S. Birchard would doubtlessly have been had something interesting to say about every aspect of the film, with full backgrounds on its actors and craftsmen. I remember that he once came into UCLA’s Theater Arts Reading Room to take a look at a fat folder of stills showing actors and crew people from silent westerns. He could place names with a great many of the faces.