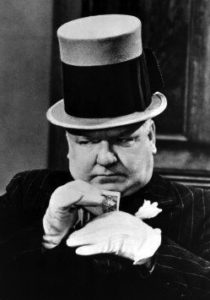 W.C. Fields divided the country into factions—con men and those who would be conned. Throughout his career the comedian played both parts, the hustler and the rube, but America loves its rogues— it’s his card shark persona that decorates theater lobbies and postage stamps to this day. For such a divisive figure his audience was diverse—for better or worse, ticket buyers of all shapes and sizes saw something of themselves in dreamers and frauds like The Great McGonigle, Harold Bisonette, and Egbert Sousé, three of The Great Man’s most memorable incarnations. Thanks to a flurry of new Blu rays from Kino Lorber, those bigger-than-life characters are back and still tilting at windmills in The Old Fashioned Way, It’s a Gift, and The Bank Dick. Each is a typical Fields farce—which is to say they’re all different yet the same. 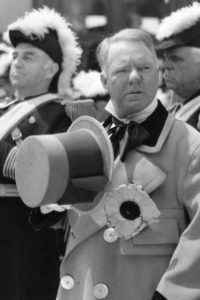 In William Beaudine’s The Old Fashioned Way, Fields plays an artful dodger who calls himself The Great McGonigle, a flim-flam artiste who manages a traveling theater troupe. Yasujirō Ozu portrayed such vagabond performers as “floating weeds” and McGonigle’s crew does their best to live down to that description. Though this 1934 comedy is occasionally tripped up by sentimentality, the film preserves some of the comedian’s most indelible moments, including Fields’s battle of wits with a sheriff—performed so deftly it’s like watching a ballet dancer pick someone’s pocket.

When Fields inhabited this sort of rascal, he usually donned a flamboyant costume, like an exotic mantis that dazzles its prey before the kill. The Great McGonigle is a walking Mardi Gras float; stovepipe hat, balloon-like broad coat, fleece mittens (accent on the “fleece”), and an enormous, clown-like sunflower pinned to his chest (the following year Fields would have to dress down as Micawber, the kindly popinjay of Cukor’s David Copperfield). 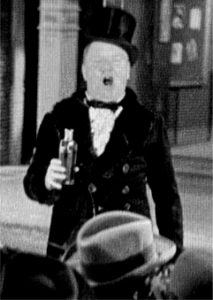 McGonigle is one busy charlatan—in between dueling with debtors, ever-present lawmen, and hopeful amateurs, he has to contend with the fiendish Baby Leroy and his doting mama, an off-key chanteuse named Cleopatra Pepperday whose bulging bank account is catnip to McGonigle (the dowager is played by Jan Duggan, apparently Fields’s lucky penny; she appeared in three more of his films). A brisk 70 minutes, the film’s final section features an example of genuine Victoriana, The Drunkard; or, The Fallen Saved, written by William Henry Smith and first performed in 1844. Beaudine presents the piece straightforwardly while Fields makes hash of the melodramatic excesses of Smith’s original. The Old-Fashioned Way itself flirts with melodrama; to ensure his daughter’s happiness, McGonigle sacrifices his career—such as it is—to sell a quack elixir that supposedly cures hoarseness. His full-throated demonstration of its miraculous effect is Fields in excelsis. 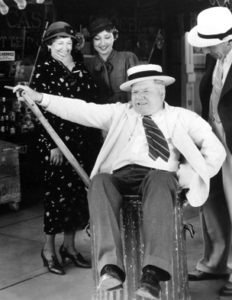 It could have been called The Human Comedy or The Ugly American, but the marquee spelled out It’s a Gift—an ambiguous title because its star was inclined to view any act of kindness with suspicion. Whatever you want to call it, It’s a Gift is Fields’s finest film and one of the great American movies about America, a small-town satire about a Jersey boy’s grand dream; an orange ranch in California. Directed by Norman McLeod and written by Fields (as Charles Bogle), the comedian plays Harold Bisonette, a mild-mannered shopkeeper whose store occupies the most raucous corner on Main Street. 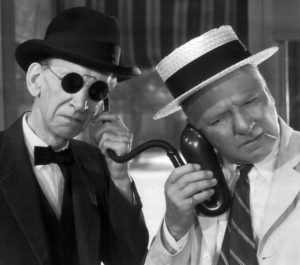 When Fields is in Everyman mode—think of Sam Bisbee, the ardent inventor of You’re Telling Me!, or Ambrose Wolfinger, the undervalued factotum of The Man on the Flying Trapeze, the charity he shows his fellow man is—for the usually antisocial Fields—startling. Yes, It’s a Gift is a Fields film with a heart—though not everyone in it has one: Harold’s typical day is an obstacle course of indignities beginning at breakfast and lasting past bedtime. Family intrusions turn the mere act of shaving into a kind of blood sport and it doesn’t get much better at work where he caters to an overheated customer in search of kumquats, rescues Baby Leroy from a molasses flood and, in the most scandalously funny sequence in all of Fields, shepherds a flailing blind man around light bulb displays and across a street during rush hour (“Watch out Mr. Muckle! Honey!”)

Having survived his workday, Bissonette must contend with getting to sleep, another obstacle entirely—standing between Harold and the Sandman is Kathleen Howard as Amelia, his wolverine wife, and their self-absorbed offspring, Norman and Mildred (the high-strung Mildred is played by Jean Rouverol who left acting for screenwriting—Joan Crawford’s Autumn Leaves is among her credits.) The only way for Harold to win this particular civil war is a retreat to the rear—in this case the veranda of the Bissonette’s second-floor apartment. It’s a Gift had the working title of Back Porch and rightfully so—approximately 14 minutes of this 68 minute film are spent on a dilapidated balcony where Fields does battle with a familiar enemy; whining neighbors, diabolical toddlers, and early-bird salesmen. 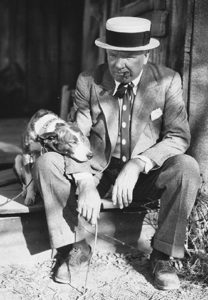 The passing of “dear Uncle Bean” and a generous inheritance allows Harold to close the deal on an orange grove and make his escape to The Golden State. The tour includes stops at an impoverished trailer camp and an expansive mansion—compelling vignettes that form a succinct portrait of the depression era’s great divide. Once in California Harold is greeted by an even more dispiriting view—his dream home is a broken down shack perched in the middle of a graveyard of brittle orange plants. He gets his just reward though—thanks to the kindness of strangers, he acquires an orange ranch bigger than any palace. It’s a gift.

When Harold Bissonette is finally able to get some sleep, his more outrageous dreams might resemble Edward Cline’s The Bank Dick—the home life of its put upon hero is a lot like Harold’s, fencing with an ungrateful family while daydreaming of Shangri-La. Everything in The Bank Dick has a parallel in It’s A Gift but in place of Gift’s dust bowl naturalism, this 1940 farce plays out in a cartoonish climate as unpredictable and strange as Million Dollar Legs, Cline’s pre-code burlesque starring Fields as the president of Klopstockia. The Bank Dick is nowhere near as wild as that 1932 comedy—you don’t feel like you’re hallucinating—but it exists in a universe distinctly untethered from reality in a tiny California town called Lompoc. 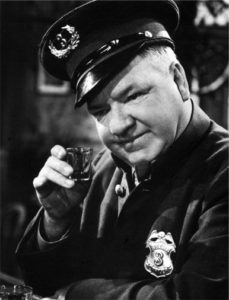 While Million Dollar Legs features a large cast of lunatics headed by Jack Oakie, The Bank Dick is pure, unvarnished Fields. He plays Egbert Sousé, a fellow who earns his living entering puzzle and slogan contests—otherwise he can be found throughout the morning and into the afternoon at the Black Pussy cafe. It’s there that he meets a frantic movie producer named Mackley Q. Greene (a vivid cameo by Dick Purcell) who offers Sousé the chance to direct a film—”It’s a one-reeler and a bupkee and it opens in this very town the day after tomorrow.” Egbert’s movie career is fleeting though, leaving time for him to—inadvertently—capture a bank robber and be sworn in as the bank’s new security guard. All before supper time. 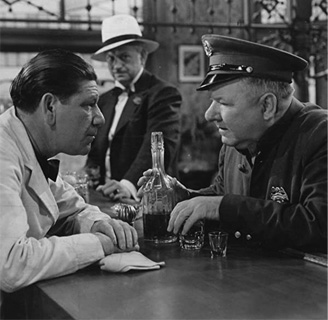 The film’s Looney Tunes undercurrent is embodied by vaudeville comic Shemp Howard—otherwise known as “The Ugliest Man in Hollywood.” Shemp tends bar at the Black Pussy and his sourpuss presence evokes the temperamental moods of Moe, Larry, and Curly—the high priests of low comedy. The Bank Dick’s resemblance to a Stooges short doesn’t end there—Egbert’s clashes with his little daughter (there are sharp rocks involved) are as painfully funny as any of the wincing punishments inflicted by Shemp and his brothers; no children or old-timers are spared.

Even more startling is the parade of Fieldsian characters that put auto-correct into overdrive; Og Oggilby (Fields’s would-be son-in-law played by Grady Sutton), J. Frothingham Waterbury, A. Pismo Clam, and J. Pinkerton Snoopington. Snoopington—played by Franklin Pangborn—is the unstoppable bank examiner who makes life uncomfortable for Sousé and earns a Mickey Finn for his trouble. Naturally the finale finds Sousé quite comfortable, living in a mansion big enough to keep his grasping wife and children at bay and out of sight. The film fades on one of the most enduring images of W.C. Fields—chasing after his favorite bartender. 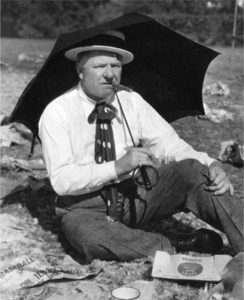 Fields’s films look generally superb on Kino’s new releases. The Old Fashioned Way suffers from a subpar print but those who were first exposed to the film by way of a fuzzy MCA broadcast will be delighted by the upgraded image (after purchasing Paramount Pictures’ early film library, MCA peppered the airwaves with the Marxes, Hope, and Fields). It’s A Gift looks lovely, certainly its best presentation since leaving theaters in 1934. And The Bank Dick is a dazzler, a remarkably clean print with terrific detail.

Kino has put two supremely qualified gents in charge of the commentaries; James L. Neibaur, author of The W.C. Fields Films weighs in on It’s a Gift and The Old Fashioned Way while classic comedy expert Michael Schlesinger does the honors for The Bank Dick. Neibaur goes into the comedian’s personal history while Schlesinger conducts a film class about the film’s production with special attention paid to the talent in front of and behind the camera. He also clues us in on the correct pronunciation of Lompoc. Trailers for the films round out the extras on each disc.