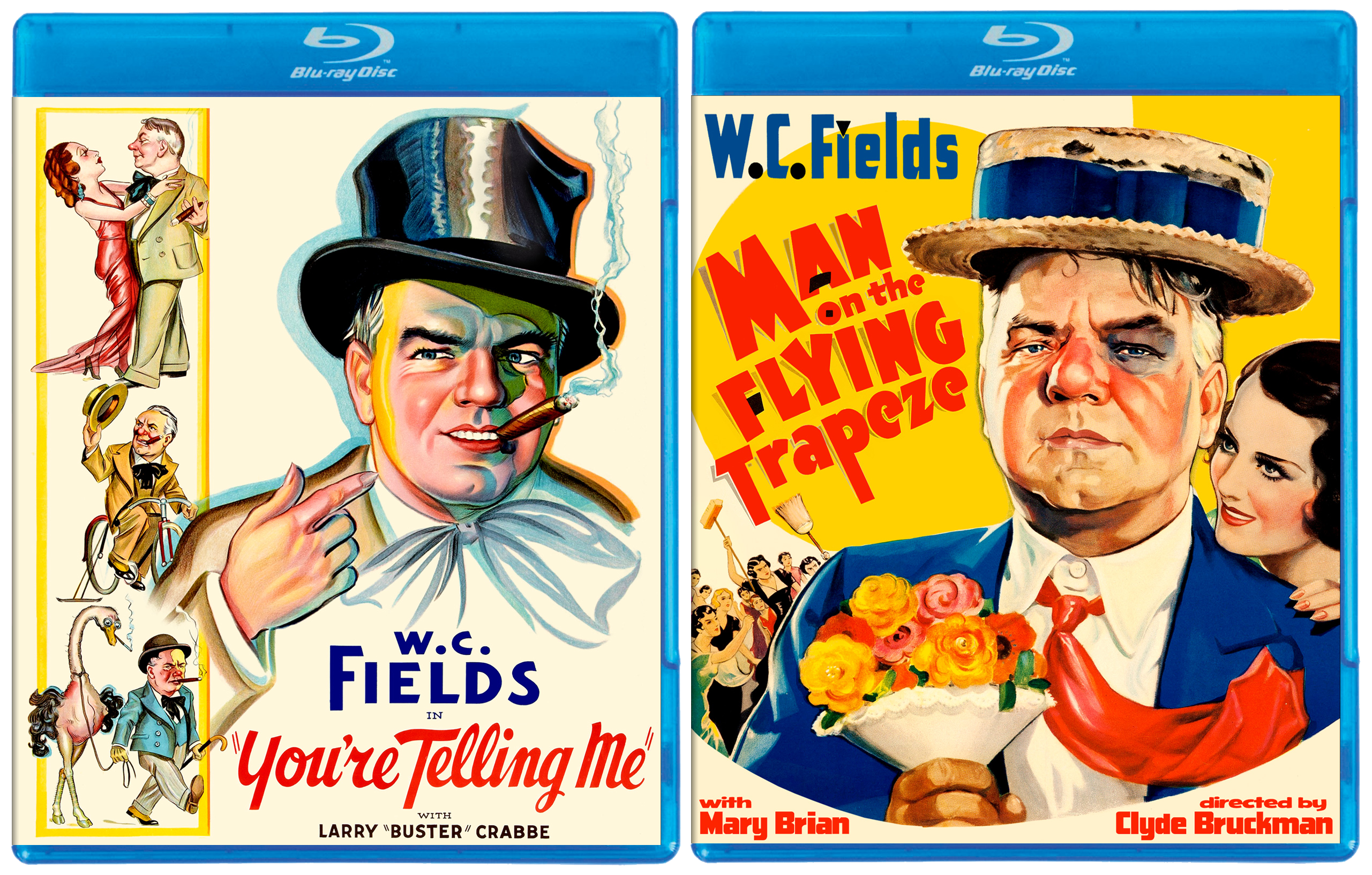 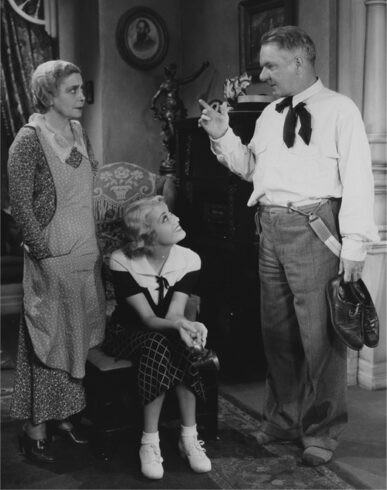 Paramount Pictures presents a grudge match for the ages, W.C. Fields vs. The World. Headlining the bill are two of the combative comedian’s most raucous comedies—as examples of the fine art of filmmaking the movies are merely serviceable, but for connoisseurs of rough and tumble humor, they’re unbeatable. In You’re Telling Me!, Fields plays Sam Bisbee, a working stiff with nearsighted visions of glory. In Man on the Flying Trapeze, Fields is Ambrose Wolfinger; timid bookkeeper and zealous wrestling fan. Both men are cut from the same cloth; small town dreamers whose bumbling behavior obscures their heroic nature—they may be down for the count but they will prevail. It was a message depression era audiences took to heart. 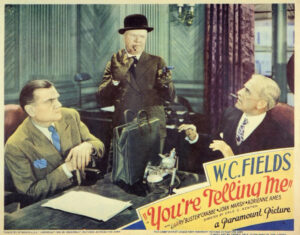 Of course such noblemen need sustenance—the henpecked Wolfinger does his drinking on the sly while Bisbee staggers home each evening in full view of the public—to the everlasting shame of his long-suffering spouse Bessie (as played by sad-eyed Louise Carter, she’s even more “careworn” than Auntie Em). Sam makes an unremarkable living as an optometrist but moonlights as an inventor of the fantastic: a gadget for barflies too drunk to use the house key, a spring-loaded sledgehammer that flattens cat burglars, and a contraption that might actually be of use—a puncture-proof tire.

The invention has attracted the interest of a big city company with deep pockets but the Bisbee jinx in full effect; Sam ends up demonstrating the wrong wheel. So begins a dark night of the soul for our hero; on the train home he decides to end it all with an overdose of Merthiolate—only an encounter with a similarly stricken young woman  saves his life. He calls his enchanting new acquaintance “Marie” but in her home country she’s known as the Princess Lescaboura and she’s ready to reign as Sam’s best friend and benefactor (Marie is played by the appropriately regal Adrienne Ames). 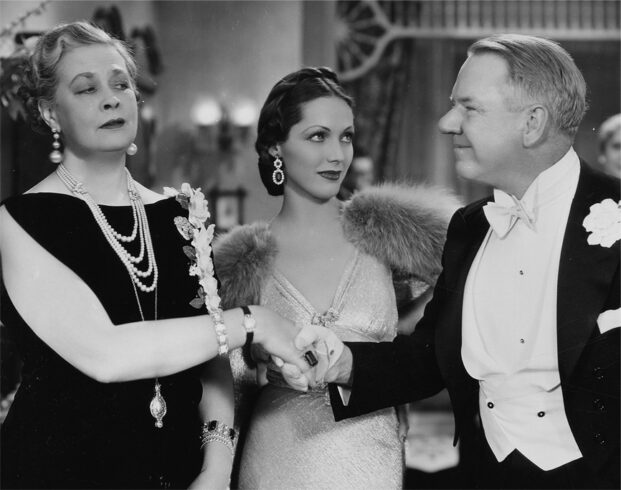 Directed by Erle C. Kenton and released in April of 1934, You’re Telling Me jumps out the gate with a burst of hot jazz signaling a typical screwball farce, but the movie itself has more on its mind than pratfalls. Bisbee’s slapstick existence is no joke, the suicide attempt shows us just how beat down this man really is (and how nervy a pre-code comedy could be). Like so many of Fields’ Everyman characters, Sam’s good deeds rarely go unpunished, and Bessie, a disillusioned romantic herself, can barely tolerate her husband’s perpetual failures. But Fields was the most idealistic of cynics—at movie’s end, the overworked and under-appreciated loser wins the day, the veneration of his family, and the lifelong friendship of a heavenly fairy godmother (Fields was having a little fun on the side, there was a real “Marie Lescaboura”—Marie de Lescaboura, born in 1729 in the Aquitaine region of France). 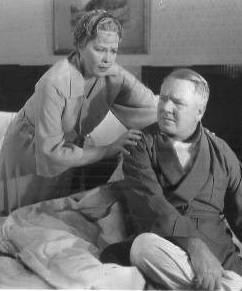 Apart from his Dickensian moniker, Ambrose Wolfinger’s world is more grounded in reality than Bisbee’s (You’re Telling Me is especially preposterous, the finale features Fields and a berserk ostrich)—nevertheless Ambrose more than lives up to his billing as the Man on the Flying Trapeze. Wolfinger may bring home the bacon but to his grasping relatives he’s naught but a meal ticket—his wife, played by Kathleen Howard, is a nightmarish nag, his mother-in-law a tyrannical gorgon, and his brother-in-law a doughy blob of entitlement (he even steals Wolfinger’s precious front row ticket to a wrestling match). The gorgon and the blob are The Neselrodes, two of the more contemptible characters in the Fields canon and they’re played to a T by Vera Lewis and the usually lovable Grady Sutton—they’re the horror show prototypes for Fields’ outrageously awful family unit in his looney bin classic, The Bank Dick. 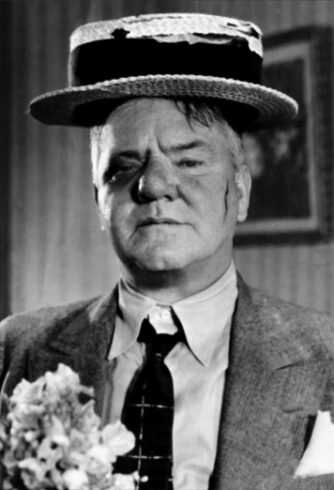 Directed by Clyde Bruckman and released a year after You’re Telling Me, Man on the Flying Trapeze is a modest production but it gives the immodest Fields a chance to burnish his legend; his braggadocio remains peerless, his nimble physical comedy still surprises, and his baroque word play takes yet another page out of Lewis Carroll and James Joyce (when he finally takes action against his in-laws, he threatens to “knock ’em for a row of lib-labs.”)

There are the usual Fieldsian foibles on display; the self-pity, the obsession with revenge, and even his occasional mawkishness. The retrograde portrayal of the women in his life—they’re either malignant harpies or worshipful kewpie dolls—was probably tiresome even in 1935, but no doubt this red-nosed knight needed a dragon to slay and the Neselrode clan fit the bill; their rainswept comeuppance is profoundly satisfying. That was Fields, gin blossoms and all, and it’s safe to say if someone were to make a movie like You’re Telling Me or Man on the Flying Trapeze today, it would come with a disclaimer—”Any opinions expressed in this production belong to Mr. Fields and don’t necessarily reflect the views of Paramount or its subsidiaries. Please don’t sue us.” 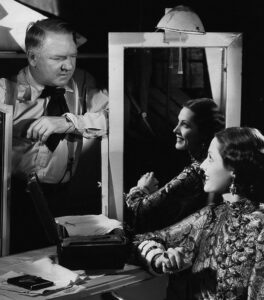 Kino Lorber is doing the Lord’s work by bringing Fields’ increasingly obscure films to Blu ray—You’re Telling Me and Man on the Flying Trapeze are especially welcome—though at running times of 67 and 65 minutes Kino might have done needy fans a solid and put both movies on one disc. Nevertheless, it’s a joy to have them at all and in such good shape; considering the era and long road these shows have traveled, the picture quality is excellent. The extras are on the scant side; both discs feature Canadian comics Wayne and Shuster in a revelatory special from 1964, Wayne and Shuster Take an Affectionate Look at W.C. Fields, and a selection of trailers from The Great Man’s films.