He’s back and he’s funnier than ever. The mischievous, cagey entertainer William Claude Dukenfield starred in some of the best comedies ever. This five-disc DVD set contains eighteen of his best, all the way from Million Dollar Legs in 1932 to Never Give a Sucker an Even Break in 1941. And we get to see all sides of W.C’s talent — he was a top-rank juggler, of just about anything. 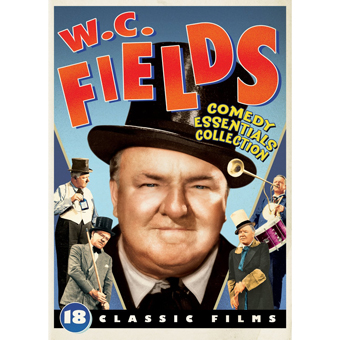 In the late 1960s there were these things called Head Shops, see, where various hippie consumer goods were sold. Nothing really appealed but I was a fool for not buying up every black-light rock poster, as many are now collector items. But the head shops also big B&W posters of movie stars. Some reflected the new pop culture bubble that was growing around selected vintage movie stars ‘rediscovered’ in a retro, quasi-camp way. There next to James Dean smoking a cigarette, Steve McQueen on his motorcycle 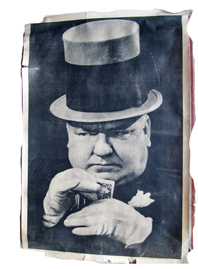 and Raquel Welch in her fur bikini, were posters of Mae West, Humphrey Bogart and the Marx Brothers. And one more, a funny fat man in a ratty top hat, holding his poker hand close to a bulbous nose that belonged in the fruits and vegetables section at the supermarket.

A year later at college we got W. C. Fields in full force. His films played on campus for a dollar, set up in whatever auditoriums were scheduled for student screenings. We showed them in the dorms, where the impossibly rude and thoughtless Fields earned big laughs from an audience of students born years after he passed away. Hollywood had thought that most of their movies were ephemeral, but by 1970 any executive with brains should have seen that there would eventually be gold in these great pictures. A W.C. Fields movie is of course dated, but in the best way. They’re witty, spirited and shot through with Fields’ oddball sense of comedy. His characters are foolish, ridiculously selfish and total boors, yet they’re adorably stubborn and intransigent. The particulars vary, but it’s usually the case that a Fields character is living in a fool’s paradise — nobody else shares his vision of his self-importance. The fun is that he’s usually able to triumph, anyway.

The five disc W.C. Fields Comedy Essentials Collection set has eighteen movies. None of them is a stinker, although have serious problems with the 1933 Alice in Wonderland, which is so klunky as to make Disney’s version seem a masterpiece. Going down the list, I see all the titles that I remember being winners. I guess calling this collection the ‘essentials’ is accurate, as Fields made many more short subjects and appearances in movies. But, assuming you can do without his appearance in MGM’s David Copperfield the core goodies are right here. 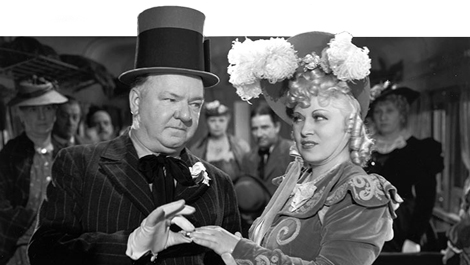 Fields spent most of the 1930s at Paramount, turning out one little gem after another. Some were remakes of silent films or of plays he did on Broadway, like Poppy, his first major stage hit after six years in Ziegfeld’s Follies. Although his stage persona is that of a curmudgeonly troublemaker, he was a legendary trouper. He’d even performed on the same bill with Sarah Bernhardt. Some of the earlier film appearances simply toss him in with other personalities, in comedy free-for-alls. He invariably holds his own. Look on the web and you may still find the film clip from International House where an earthquake strikes in the middle of a scene. Fields had surely been in at least one theater fire in his day. He becomes the voice of calm and reason, reassuring his fellow performers.

‘Bill’ got bigger star billing and bigger money with a switch to Universal. Despite the stories of nickel & dime bank accounts spread across the country, he was a very wealthy man from the time of the First World War. I like to think of Fields being the kind of bigger-than-life personality having a hell of a good time and beloved by everybody in Hollywood. The Rod Steiger biopic reportedly has nothing to do with anything regarding the real man. 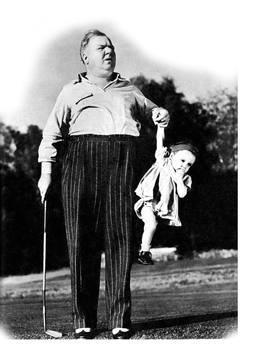 Almost every film has things in it that inspire smiles, just in recalling one’s initial reactions. The innocuous It’s a Gift begins with a set piece in a country store with Field’s grocer trying to minimize the havoc created by Mister Muckle (Charles Sellon), a ridiculously destructive blind customer who swings his cane around a display of light bulbs. Fields can do nothing while the old coot demolishes everything. Part of the tension comes from the way most movies treat blindness, as something spiritually uplifting. Mr. Muckle is just a hopeless pain in the tail, a total menace to navigation. 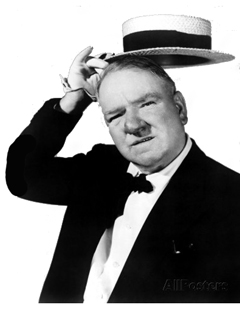 The masterful The Old Fashioned Way affords Fields the chance to play the film-flamming traveling performer The Great McGonigle, who hoodwinks a widow to keep his show going. We’re given an extended, faithful performance of the old barnstorming play “The Drunkard.” And this is the show with Fields’ toddler nemesis Baby Leroy, where McGonigle checks to see that nobody’s watching, and then gives the kid a kick in rear, knocking him down!  Take that, family values. Best of all, Fields demonstrates his legendary juggling act, which is pretty amazing. It’s purposely filmed in long takes, to prove that there’s no editorial cheating. Wonderful stuff.

My introduction to pre-Code movie madness, with double-entendre dialogue, risqué costumes, ‘hot’ music and sex-obsessed comedy, was the manic farce International House. The UCLA Archive had Paramount’s original nitrate studio prints, which retained the soft cinematography of the early ’30s and had the ‘silver screen’ appearance. This show gives us wonderful comedy from George Burns and Gracie Allen, a grotesque song from ‘Baby’ Rose Marie (of the Dick Van Dyke Show), Rudy Vallee crooning, Cab Calloway singing ‘Reefer Man’ and Sterling Holloway dancing with a row of semi-nude chorines dressed as tea cups and sugar bowls. Topping it off is Bela Lugosi as an angry Russian. Top billing goes to Peggy Hopkins Joyce, a contemporary swinger and gold digger who made a Kardashian-sized splash in the tabloids. W.C. Fields is a crazy millionaire who lands his autogyro on a hotel roof in China, and then demands to know if he’s in Kansas City Kansas, or Kansas City Missouri. 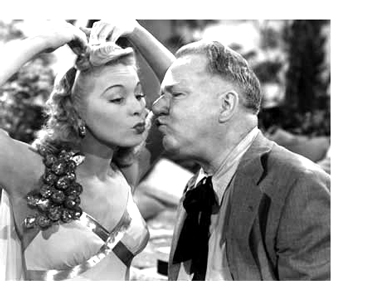 The Big Broadcast of 1938 is a big scale ensemble film, with a tame musical interlude or two but a great lineup of talent and several classic moments. Bob Hope introduced his signature song “Thanks for the Memories” here, and it’s quite touching. Dorothy Lamour sings a pretty song “You Took the Words Right Out of My Heart” to young Leif Erickson, later the zombie dad in Invaders from Mars. Martha Raye shows herself a consummate entertainer. Even when playing up her awkward frog persona she’s actually very graceful. Fields’ last Paramount feature is essentially a science fiction movie, with two enormous cruise ships, the Gigantic and the Colossal racing to England. To go faster, Fields’ ship has installed giant airplane engines, powered by electricity sent by radio waves. The director is Mitchell Leisen, who bathes the whole show in glamour – the ship’s desk is as shiny as polished glass

My Little Chickadee famously bills W.C. with Mae West, but there’s little opportunity for them to play off each other to the best advantage — it’s as if a phalanx of censors were just out of range, making sure that West didn’t as much as give Fields a funny look. Still, they’re a couple made in heaven, as if James Dean played opposite Marilyn Monroe. Miss West had to cool her act, but Fields’ Cuthbert J. Twillie ad-libs the most jaw-droppingly racist throwaway line ever to sneak past the Production Code. It’s still around, and has been used against our president , even. 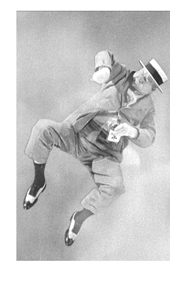 Never Give a Sucker an Even Break, a film partly written by Fields, is a crazy fantasy built around himself (or ‘The Great Man’) pitching a story idea to a studio executive, Franklin Pangborn. Bill and his adoring niece (Gloria Jean) end up on a strange mountain palace, with Fields trying to woo either Mrs. Hemogloben (Margaret Dumont, yay!) or if that fails, her virginal daughter, Ouilotta (Susan Miller). A great many special effects ensue. The weird thing is the mix of material. Bizarre fantasy is a scene away from simple comedy bits in the studio café. A terrific car chase finish shows Cahuenga Pass before the advent of the Hollywood Freeway. Instead of being a mess, the movie comes off as inspired.

Universal Studios Home Entertainment’s DVD of the W.C. Fields Comedy Essentials Collection carries the 18 films on five discs, distributed by length. Three of the discs carry four films each, which would raise worries about bit rate and compression until one realizes that many of the features are barely over an hour long. I checked them all, and although I’m sure a Blu-ray would look better, the encodings are very good. The first four movies are a bit softer only because the Paramount house style favored heavy diffusion to yield an expensive, glossy look. I noticed no artifacts or loss of sharpness.

As an extra we get a clip show hosted by a pair of 1960s comedians: Wayne and Shuster take an Affectionate Look at W.C. Fields. Is this meant to ‘explain’ Fields to youngsters? The clips are already in the features and it isn’t as if the connecting scenes add greatly to our knowledge of the great man. The best way to be introduced to W.C. Fields is to simply take a swift dive into something like The Bank Dick or You’re Telling Me!  Chances are you’ll discover a new favorite funny man.