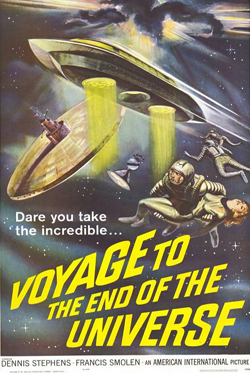 Voyage to the End of the Universe

Jindrich Polak’s 1963 Czechslovakian space odyssey was originally titled Ikaria XB-1, the name of the spaceship on a mission to search for life in the stars of Alpha Centuri. Adapted from Stanislaw Lem’s novel The Magellenic Cloud, this austere and beautifully designed pic anticipates Tarkovsky’s Solaris and remains one of the best of the Eastern Bloc science fiction films– all of which were released in the West in reworked adaptations. The uncut version, in 2.35 widescreen with subtitles, can be seen here.