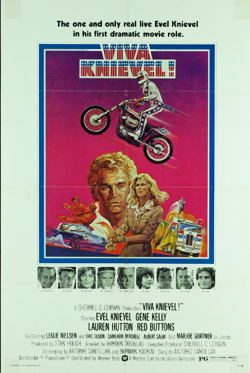 Having been portrayed by George Hamilton in a 1971 biopic, motorcycle daredevil Evel Knievel took on the fictionalized role of his own life in this surprisingly well made actioner, the last film directed by the prolific Gordon Douglas. Produced by an uncredited Irwin Allen, it boasts a surprisingly strong cast and production values. Knievel’s life supplied grist for TV movies in 1974, 2004 and 2005.