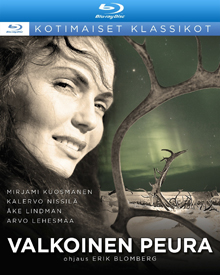 A few years back the pioneering disc boutique Mondo Macabro imported a number of exotic Eastern horror films, such as Purana Mandir from India. The movies seemed a real cultural curiosity, an imitation of our genre filmmaking with local touches added. Phil Hardy’s Encyclopedia of Horror reference book whetted my appetite for scores of amazing-sounding foreign horror pictures, that I thought I’d never see. Many have been made available in the digital age, although not always in this Region. A friend loaned me this exotic picture, regarded as a classic from the Finnish ‘golden age’ of film. I didn’t order this Region B disc myself, so can’t vouch for the seller found online. 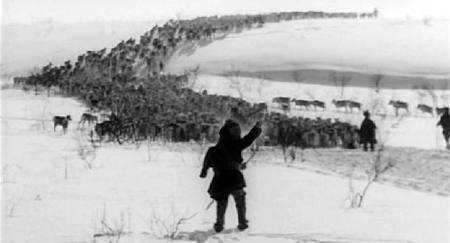 Valkoinen Peura is Finnish for “The White Reindeer.” Toward the end of her acting career, Finnish film star Mirjami Kuosmanen collaborated with her husband Erik Blomberg, co-writing the script with him. Producer Aame Tarkas was initially set to direct, but the experienced Blomberg took over. Kuosmanen is also credited with the costumes, wardrobe and makeup, making this a family project. The show was not only successful, on export it won a prize at the Cannes Film Festival, from a jury led by Jean Cocteau. Five years later it was given an art house release in New York, and took the Golden Globe for Best Foreign Language Film.

The charm of this movie is not easy to describe. The filmmaking is pared-down and simple, with few camera angles; yet the direction is not at all unsophisticated. Part of the appeal is the setting in Lapland, before the modern era. We get the feeling that the story could be happening a hundred years ago, or three hundred. In that frozen environment we’re impressed that the actors can even function. 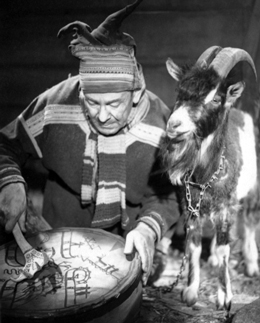 The story has a fairy tale quality. Lapp beauty Pirita (Mirjami Kuosmanen) is the prize of the community, where the men must leave on long hunts to tend their herds. Reindeer are the local beast of burden, a source of transportation, food and clothing. When not praying at a Christian church the locals find time to play — racing reindeer harnessed to boat-like sleds. The kind and optimistic Aslak (Kalervo Nissilä) is the Alpha Male that woos Pirita and gets her consent to marry, and we see the courting and announcement ritual. But Pirita finds that something is missing in marriage. When she gets lonely she wanders, and on one of her sojourns she comes to the hovel of Tsalkku-Nilla, a mysterious Shaman (Arvo Lehesmaa). After her spirit appears to make a rune-like bone dance on the skin of an ancient drum, the Shaman casts a spell on Pirita. She’s promised a miracle if she gives the first living thing she sees to a ‘stone god’ out in the snow. Pirita sacrifices a reindeer calf that Aslak has given her, but her miracle turns out to be a curse: she shape-shifts between a magical, murderous White Reindeer, and a fanged vampire woman. Unlucky hunters of the white reindeer are enchanted, seduced and exsanguinated. Unable to tell anyone of her evil crimes, Pirita can only watch as her husband Aslak forges a special steel harpoon suitable for killing a demon. It’s only a matter of time before she’s hunted down.

Valkoinen Peura has a full soundtrack but not that many synch sound lines; much of it plays like a silent movie with an impressive music score. The story is bookended with a haunting folk song in an unfamiliar, beautiful vocal style. How many times these days do we hear music and think, ‘I’ve never heard anything like that before? 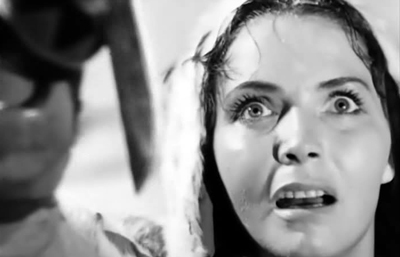 The authentic (?) folk tale in this fascinating show has parallels in every culture. Although Christian, the Lapps appear to acknowledge pantheistic magic, and the notion of people who can shape-shift into animals is universal. I believe it’s a common situation in stories of North American Indians. The one photo of director Blomberg shows him working behind a basic camera, out in the cold. The only ‘special effect’ is his artful lighting and expressive camera angles. Sometimes a change of lighting on the snow will augment the music of Einer Englund, producing a ‘magical’ effect. In one sequence we see a shot of the white reindeer rendered in negative, suggesting the naïve yet effective visuals in F.W. Murnau’s Nosferatu. 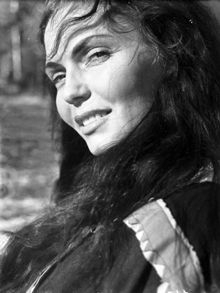 Everything in the film leads back to Mirjami Kuosmanen’s Pirita, a bright combination of feminine beauty and strength. Pirita has the robust looks of country girl, who smiles without squinting in the blazing sunlight off the snow, her face frequently dusted with snowflakes. Pirita reminds us a bit of Pamela Brown’s Catriona Potts in the Powell-Pressburger I Know Where I’m Going! — she has the same feral-earthy appearance of a country woman raised among livestock, who knows how to clean her boots when she comes indoors.

Unfortunately, in the old Lapp culture lonely housewives aren’t supposed to have personal dreams and desires, and women can be punished simply for being curious and open-minded. Yes, it’s all about sex, as shown when Pirita is restless and her husband is sleeping soundly. A vacation to Italy would solve all of Pirita’s problems.

But would Pirita come back? Ice and snow are the unchanging human condition in this land. All the dialogue ought to be some Finnish variation on ‘I’m freezing, goddammit,’ but everybody seems to be getting along. Even in wide shots only one or two people can be seen stamping their feet against the chill. One of the sleeping situations we see appears to be communal. There’s so little privacy that we can’t help but wonder how they manage to conceive children — it seems unwise to disrobe, in case a cold draft catches one. I suppose baths wait until summer (unseen) and all the children are born in the winter, along with the new livestock.

According to online articles, Mirjami did most of the work directing the actors, while Erik handled the camera and lights — they were equal partners. This can’t have been an easy shoot. Ivalo city and the municipalities of Inari and Utsjoki are in the extreme north of Lapland, up where Finland, Norway and Russia meet, way above the Arctic Circle line. Only the top quarter of Alaska is actually in the Arctic Circle. Buy future sunny beachfront property now. 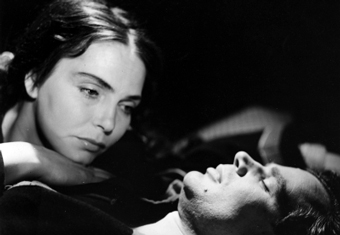 Let me not oversell the visuals – the filmmaking is basic, yet it has a different feel, a cultural integrity. Director Blomberg’s direction is simple without actually being primitive. He finds the right angle and uses it. There’s little or no matching continuity cutting comparable to the fluid Hollywood standard. Yet we’re never disoriented and we know exactly what’s happening in each scene. When Blomberg cuts without embellishment directly from the reindeer-Pirita to the vampire-Pirita, the transformation still works.

The horror content is tame yet disturbing, because the ‘monster’ is the entirely wholesome Pirita, our focus of sympathy. Evil sneaks up on Pirita, and suddenly we’re confronted with images we recognize. As if in a nightmare, Pirita turns toward us in a changed lighting setup, lit from below. She approaches the camera with a faint smile, and we realize that she now has a pair of discreet fangs. I had thought that the first fanged on-screen vampires were in Hammer’s initial Technicolor horror pictures, five years later. We only see a couple of shots of Pirita readying to bite a victim, in close-ups just like a Terence Fisher vampire bride easing her teeth onto a waiting jugular. The horror fans I’ve talked to respond positively to this bit of precocious invention. The simple view of Pirita approaching the camera, a ‘nurturing’ female with a perverse thirst for blood, is in its quiet way as disturbing as, say, the shot of the menacing, yet playful Jill Banner crawling toward us in Jack Hill’s Spider Baby. 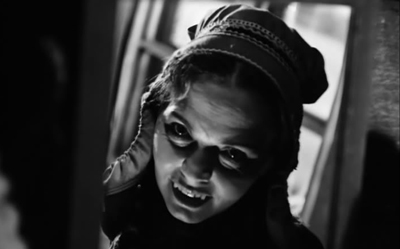 Yes, the foundation myth of this story is as misogynistic as any primitive fable. Pirita is a sad case yet still a witch-for-burning, a female condemned for splitting from the approved path, for seeking something sensual away from her rigidly defined domestic role. I suppose Pirita was supposed to stay in Aslak’s hovel and content herself by sewing pelts and practicing her welcoming smile for his return from the hunt. The saving grace is that Blomberg and Kousmanen don’t hype Pirita as evil or wanton. The leading lady is at all times sympathetic, and not a demon. This is very much a were-reindeer story, minus heavy doses of Christian moralizing. Nature is mysterious, and those that live as close to it as do the traditional Lapps, form relationships we city folk can only theorize about.

VLM Media’s Region B Blu-ray of Valkoinen Peura (The White Reindeer) is a handsome copy of this once-rare picture. An associate remembers it playing at an art theater in Beverly Hills in 1957, as ‘The White Reindeer,’ but only for a couple of nights. That may have been the only theatrical exposure it received in town for all this time. 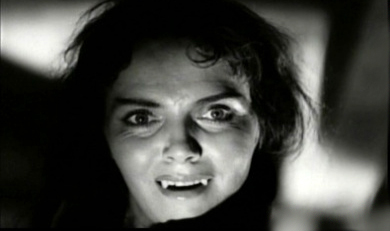 The film is nicely restored. Contrast is fine, and the stills shown here give an accurate impression of the quality. Opticals are cut in and sometimes look a little soft, but the design of dissolves and fades is still nicely done. Old Erik Blomberg was likely a one-stop movie shop. His titles are done through a bi-pack trick right in the camera — the main title is off center and the black lettering is a little shaky. The audio track shows its age but is still robust; that strange, antiquated-sounding vocal over the titles and prologue, and at the end, is quite haunting.

The extras are a couple of silent newsreels in B&W, of Finnish film people at an awards dinner of some kind. Mirjami Kuosmanen is visible only for a few moments, sitting at a table. Another short subject is a home movie in excellent color, showing Ms. Kuosmanen visiting what looks like a snowbound location for the film.