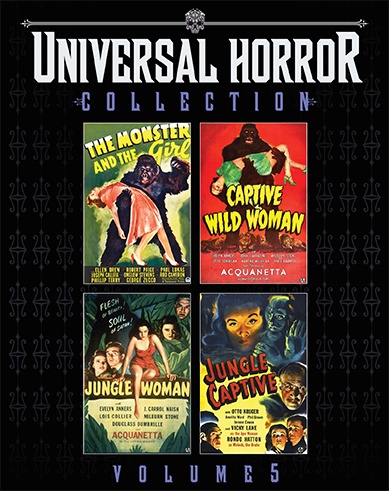 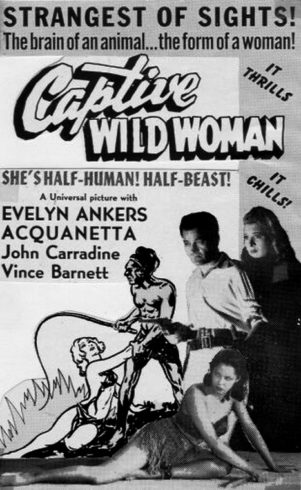 The Universal Horror Collection Volume 5 should appeal to ape suit fans everywhere—and spoiler alert—one of the films in the set is genuinely good, a lyrical genre-buster that is as inventive as it is poignant.

That movie, The Monster and the Girl, shares space with a trio of bottom-rung potboilers concerning the misadventures of Paula Dupree, a beautiful circus performer with the bad habit of changing into a monster—though she’s not “changing” so much as reverting to her true nature; Paula is a deracinated gorilla given human form by a not-so-mad doctor (the term “gorilla” comes from the ancient Greek “gorillai” meaning “tribe of hairy women”—that’s Universal, always a stickler for a scientific basis in their horror films.) The statuesque Aquanetta plays Paula and, except for some grunts and growls in her ape state, her’s is a completely mute performance. It’s blank in most other ways too. 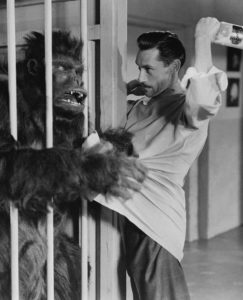 Each film in Paula’s saga hovers around the 60 minute mark and each is so crammed with stock footage they barely qualify as original productions. Even the origin story, Captive Wild Woman, makes generous use of clips from 1933’s The Big Cage starring Clyde Beatty. There is so much footage of Beatty standing in for the big top performer played by Milburn Stone, one wonders if the wavy-haired actor wasn’t cast solely on his resemblance to the renowned animal trainer. John Carradine is Sigmund Walters, a scientist dabbling in pituitary gland swapping—the object of his latest experiment, Martha MacVicker,  just happens to be the sister of Evelyn Ankers who’s the girlfriend of lion-tamer Stone who’s just returned from the continent with a new pet gorilla and you see where this is going. 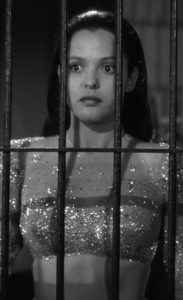 Her past-life as an ape has given Paula telepathic control over the circus animals so she’s put to work as Stone’s assistant. Meantime she’s developed another, all-too human emotion: jealousy. Incensed by Milburn and Evelyn’s romantic entanglement, Paula reverts to gorilla form and sets out for revenge. Her moonlit appearance at Ankers’s bedroom window would be alarming except that, like everything else in this movie, nothing happens. Directed by Edward Dmytryk and written by Griffin Jay, this pulpy thriller is workmanlike product through and through—and even at its abbreviated length it seems padded.

Having survived one simian soap opera, most of the cast and crew of Captive Wild Woman are back for the following year’s Jungle Woman and lucky Reginald Le Borg was assigned to direct. While the first film leaned in hard on the stock footage, Le Borg’s follow-up positively wallows in it—a formidable part of this 60 minute feature is spent rewinding “highlights” from Captive along with more reruns of Beatty animal action. If they ever decided to form a Consumer Protection Agency devoted to movies, Jungle Woman would be Exhibit A. 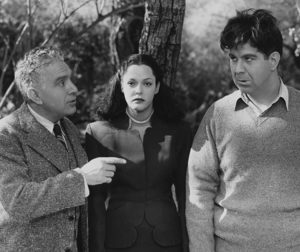 J. Carroll Naish is the poor scientist who makes the mistake of resurrecting Paula and is now on trial for killing her. Stone and Ankers are back and looking none too happy—and I don’t think it’s because of Naish’s legal troubles. Acquanetta makes her second and final appearance as Paula (the somnambulant actress was set to sashay over to RKO as the High Priestess of leopard-skin bikinis in Tarzan and the Leopard Woman).

Some optimistic studio head thought a third Paula film would be a swell idea and so The Jungle Captive loped into theaters in 1945. Once again Paula’s lifeless ape body lies waiting in the morgue for her Prince to come and he does, in the shape of Rondo Hatton who strangles the morgue attendant—not very princely but very Rondo-like—and makes off with her hairy corpse in a stolen ambulance. Otto Kruger is the kindly scientist who turns out be a few cards short of a deck and goes to work reviving Paula with the help of a blood transfusion from his unwary lab assistant. 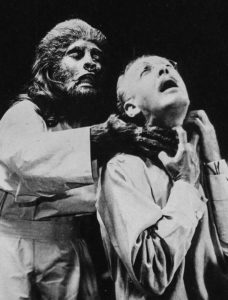 An actress named Vicky Lane plays Paula and she too has no lines, just an unwavering thousand-yard stare. Whoever is wearing the ape suit at least gives the impression of having some fun—Lane appears to have lost her way during a studio tour and wandered on set. The Jungle Captive is a unique entry in the series in one respect; there’s not a frame of stock footage to be found—and it’s not too long into the movie before you’re really missing that stock footage. Harold Young took over for Le Borg and it seems he just threw up his hands and got to work (Young did direct one of the more enjoyable Inner Sanctums, The Frozen Ghost and a Ritz Brothers film with a great title: Hi’ya,  Chum).

And now for something completely different, yet the same. 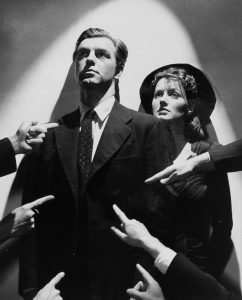 Stuart Heisler’s The Monster and the Girl was made in 1941 but it has the lurid kick of a pre-code film. The movie keeps you off balance from its first frame—a ghostly figure emerges out of a mist and addresses the camera—her name is Susan Webster, a self-described “bad penny.” Dressed in funereal clothes, she has the grimly determined gaze of a depression era sharecropper. She has a tale to tell, a story that unfolds in flashback that feels more like a trip down the rabbit hole.

Our first stop on this hallucinatory journey is a courtroom where Susan’s brother Scot is on trial for murder. A bellhop swears he saw Scot in the act and his agitated testimony plunges us into a flashback within the flashback—the past bleeds into the present and back again. Like Rashomon, the murder scene is played out from different vantage points. All in the first ten delirious minutes. The audience can be excused for needing a scorecard but the effect is hypnotic. 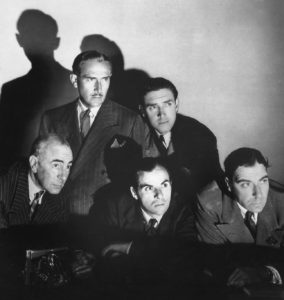 Not part of that rogue’s gallery but watching the trial with equal interest is George Zucco who plays Dr. Parry—a major player in the film even if he has a minor part. The monkish Parry seems affable, even humane, but he only views Scot as a subject fit for experimentation; he has in mind a bizarre brain-swapping procedure that could grant the boy life after the electric chair. A deal is struck and soon Scot’s body is en route to the doctor’s mansion. The first sight of Parry’s workshop—it has a passing resemblance to Karloff’s state of the art lab in House of Frankenstein—suggests we’re entering an alternative universe in which humans become monsters with the flip of a switch. 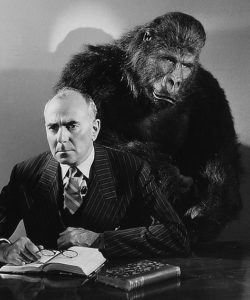 And with the flip of a switch Scot is reborn. And so is the movie—Heisler’s film sheds its hard-boiled skin and turns poetic—a film noir take on Beauty and the Beast. Post-operation, Scot’s brain resides in the skull of an enormous gorilla with a wide body and long, burly arms—they could snap a spine with ease. And soon they will; Scot controls not only the monster’s movements—the ape has Scot’s heart, his soul, and a mission. He sets out to destroy Lukas and his cohorts—and as we learn more about what these villains did to his sister (forced prostitution, an implied gang rape on her wedding night), the more we root for her now-monstrous brother to take his revenge and make it count.
. 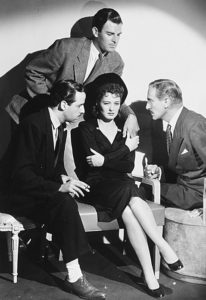 The movie’s unusually sharp dialog was written by Stuart Anthony who was something of a journeyman scribe—he wrote a lot of westerns and a couple of the Charlie Chan films with Warner Oland. His best known work might be The Biscuit Eater, also directed by Heisler. It’s the story of two boys and a dog and like so many canine-themed movies, it ends in tears. Some of those same emotions find their way into The Monster and the Girl but in this setting they’re not so easily resolved—because this is the story of an ape and his dog named “Skipper.” If all that sounds like a bridge too far then it should only heighten one’s admiration for the film—Heisler walks a narrow tightrope but he balances the pathos perfectly. That dog was Scot’s own pet in his past life and the bond they shared remains. We understand this thanks to the unusually delicate pantomime Charles Gemora performs as the gorilla. His body language is both brutish and tender, his soulful gaze quite moving. 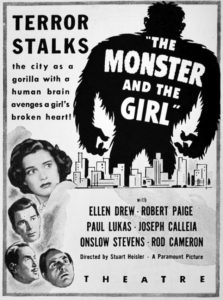 Heisler uses every pictorial trick in the book, montage, superimposition, and at one crucial moment he resorts to a cartoonish spin dissolve to telegraph the movie’s chaotic mood swings. He choreographs scenes of suspense touched with compassion; as the monster works his way through his victims the little mutt tags along as a steady reminder of Scot’s humanity even as he crushes the life out of his enemies. Heisler concocts one vertiginous moment when Scot tracks his prey from the rooftops while his nervous victim scurries along the sidewalks below—a scene Francis Coppola would duplicate in The Godfather Part II. For a movie only 64 minutes long, it’s a complex and heartrending experience—it can stay with you for days.

The transfers for these films are quite nice—hardly restoration quality but just what is needed. The exception is the exceptional Monster and the Girl which was shot by Victor Milner. Milner was apparently Preston Sturges’s favorite cinematographer (he shot most of the director’s greatest films, working on The Lady Eve the same year as The Monster and the Girl) and won an Oscar for 1934’s Cleopatra. He deserves better than the just “ok” presentation of his work here.