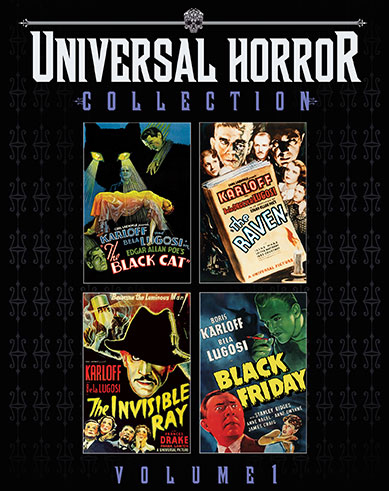 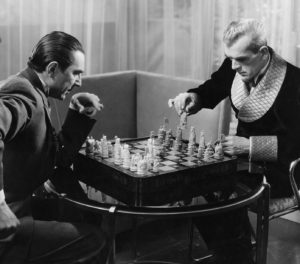 Like the cat who swallowed the canary, Boris Karloff made for a serenely sinister antagonist. Even when portraying bloodthirsty devils like the vampire Gorca in The Three Faces of Fear or a debauched satanist looking for trouble in The Black Cat, “Dear Boris” was the very model of a well-mannered monster.

Bela Lugosi, Karloff’s unofficial rival on the Universal lot, showed similar restraint in his star-making turn as Dracula – but the same halting, imperious manner that gave otherworldly dignity to the Count would typecast Lugosi as a kind of oddball antihero – the cultivated eccentric driven to madness or worse. He approached each of those roles with a manic intensity that might net you an Oscar or a strait jacket.

Opposites attract, even in horror films, and when the two gentlemen finally faced off the publicity machine promised a fight to the finish. Instead the actors played – the sound stage was their chessboard and their co-stars merely pawns. For movie lovers it was a welcome standoff – each king would continue to antagonize the other over the course of seven wildly entertaining thrillers. 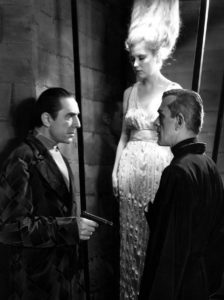 Shout! Factory has released four of those movies in a pricey but well appointed four-disc Blu ray set – an apt tribute to two actors whose hold on the public imagination remains stronger than ever.

Karloff’s quietly foreboding demeanor was tailor made for Hjalmar Poelzig, a devil-worshiping degenerate with a sick sense of style in 1934’s The Black Cat. A “world famous” architect, Poelzig lives in a towering art-deco fortress built above a World War I burial ground. He’s haunted not by ghosts but the vindictive Vitus Werdegast played by Lugosi – a feline-phobic psychiatrist searching for his lost wife and daughter. Unfortunately for Bela, he finds them.

Released at the advent of the Hays Code, the grim shocker struck one last blow for creative freedom with a story by director  Edgar G. Ulmer and writer Peter Ruric that reveled in necrophilia, incest and mutilation.

The gruesome game is afoot when Karloff becomes obsessed with a young woman in Lugosi’s company. He plans to do to her what he did to Bela’s wife and daughter – bring her first to bed and then to another kind of chamber – a crypt that doubles as a macabre art gallery where he displays his former lovers in upright glass coffins. But before that, a sacrifice is in order. 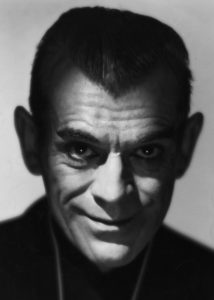 For those whose best memory of Karloff is the grandfatherly narrator of How the Grinch Stole Christmas, his performance as the depraved Poelzig may come as a shock. Or not. The Dr. Seuss/Chuck Jones designs for the Grinch, the thin-lipped grimace, the mascaraed cat eyes, can be found in Poelzig’s own reptilian profile – helped along by one of the more subtle make-ups of the brilliant Jack Pierce.

Much of the film’s power stems from its horrific finale – Werdegast marches Poelzig to the stocks and pulls out a scalpel just as the camera – thankfully – turns away. It’s a nightmarish sequence that literally gets under the skin and made all the more disturbing by playing out in the shadows (the lurid set piece packs an extra punch thanks to John J. Mescall, the cinematographer responsible for the following year’s Bride of Frankenstein).

In spite of critical backlash (The New York Times called it “more foolish than horrible” and Variety considered it the opposite of boffo – “a poor imitation of things seen before”) it fell to the terrified audience to make the final call and their screams were heard loud and clear – ticket-buyers nearly tripled the film’s budget at the box office. Loyal fans of the monstrous duo would soon get their reward. 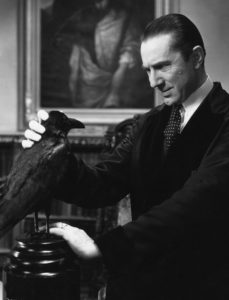 Karloff may have top billing but Lugosi rules the roost in 1935’s The Raven – he plays Richard Vollin, a brilliant but batty neurosurgeon with a Poe fetish who falls in love with his own patient, a young dancer intrigued by Vollin’s morbid obsessions.

Karloff, as usual, plays it close to the vest as Edward Bateman, an escaped killer moonlighting as Lugosi’s man-servant – thanks to Vollin’s diabolic surgical skills the brutish fugitive is a disfigured shell of his former self and forced to do the madman’s bidding.

Already untethered from reality, Vollin snaps for good when the beautiful ballerina rejects him – seeking revenge he invites her friends and family for a weekend of fun and, to quote Vincent Price, “…food and drink and ghosts, and perhaps even a few murders.” 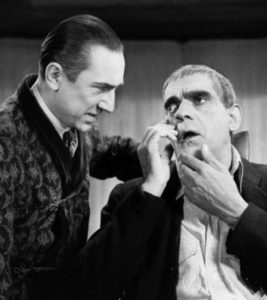 In The Black Cat, David Manners complained about Poelzig’s “tricky house.” Had he only seen Vollin’s – the joint is full of hidden walkways, shrinking bedrooms and waiting in the catacombs a compact torture chamber featuring a working model of the Pit and the Pendulum (though it’s dwarfed by the towering contraption manned by Price in Roger Corman’s 1961 shocker).

Ever since Susan Sontag, litterateurs have struggled to define “camp” – but surely The Raven is Exhibit A. There is the ballerina’s “interpretative” dance to the Poe poem – a gothic take on Swan Lake that’s more like a swan dive, the risible dialog (“I think you are saying something… profound”) and Lugosi’s barking mad performance – crackling with the unpredictable energy of a runaway car just before it sails over the guardrail.

In marked contrast to The Black Cat, The Raven faltered at the box office. Adding insult to injury, the movie caused enough hubbub in England that the film was deemed partly responsible for a temporary ban on horror films in the country. This may have influenced the duo’s next collaboration which took a decidedly science-fiction turn. 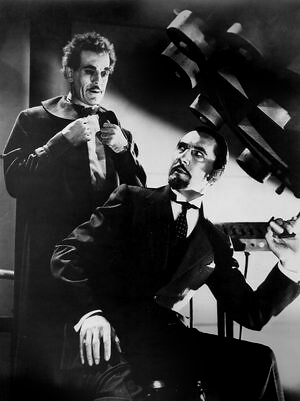 Karloff and Lugosi prowl the continent in Lambert Hillyer’s The Invisible Ray, a gothic thriller with one foot in the jungle and the other in a sky-scraping laboratory resembling a futuristic revision of Colin Clive’s operating room.

Karloff plays Janos Rukh, an astronomer able to observe prehistoric meteors sailing to earth thanks to a telescope that peers into the past. He accompanies Dr. Benet – played by a remarkably even-keeled Lugosi – on a search for one of those meteors and is promptly poisoned by the irradiated rock. Before long Rukh is lighting up the night sky courtesy of his own skin – and going mad to boot.

In a cheeky bit of showmanship worthy of Dr. Mabuse, the demented Rukh, who kills with the touch of a radioactive finger, uses the statues atop a church as bellwethers for his latest victims – each time he poisons an unfaithful friend he melts another monument.

There is a fascinating but unmined subplot involving Rukh’s oddly subservient approach to his mother (he seems slightly afraid of the aristocratic old lady) but the enigmatic relationship pays off in the spectacular, not to mention poetic, finale when Rukh goes up in flames and plummets to earth like one of the meteors he was chasing in the first place. 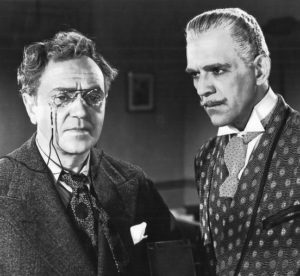 What happens when a little-remembered British character actor steals a movie from under the noses of the mighty Karloff and Lugosi? Polite audiences – along with Boris and Bela – will applaud the startlingly good performance of Stanley Ridges in a dual role – as George Kingsley, the embodiment of the absent-minded professor and Red Cannon – a take-no-prisoners mobster.

Karloff made his name as the misbegotten creation of a mad scientist and he managed to return the favor over the course of his career. In Black Friday he plays not necessarily a mad doctor but definitely a morally conflicted one – he saves Kingsley’s life by giving him the brain of a gangster with disastrous results. “I didn’t ask for this” is the unspoken mantra of Frankenstein’s creation and the kindhearted Kingsley certainly didn’t deserve this fate. 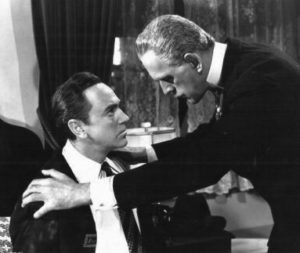 Thanks to Karloff’s well-meaning meddling the bookish college prof is suddenly thrust into the life of a homicidal racket boss and that includes strangling all the former henchmen who did him wrong. It’s a typical Jekyll-Hyde story that gains traction from Karloff’s corrupt medico who undergoes a transformation himself – from Kingsley’s best friend to his puppet-master.

The formidable – and very busy – Curt Siodmak wrote the screenplay (in the same year as The Invisible Man Returns and The Invisible Woman and one year before The Wolf Man) and Arthur Lubin, a man who apparently contained multitudes (he was at the helm for a generation of entertainment including Buck Privates, Rains’ Phantom of the Opera and The Incredible Mr. Limpet) directs with economy and style to spare, even working in a grandly spooky J’accuse! moment as Kingsley imagines his victims rising from their graves to take their vengeance. 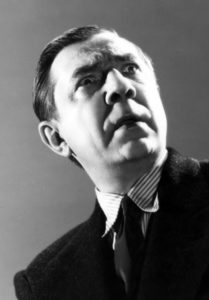 Lugosi has a thanklessly small role as an unlikely mob boss but the old trooper didn’t complain, even lending himself to a preposterous (and borderline humiliating) PR stunt in which the woozy thespian pretended to be hypnotized.

There was one more showdown on the horizon for the longtime sparring partners, Robert Wise’s splendid 1945 thriller, The Body Snatcher. Lugosi was once again given a losing hand but Karloff’s grinning fiend John Gray – the wicked doppelgänger to Henry Daniell’s tortured humanitarian, ranks among his best performances.

Lugosi would rise again, reviving an older, wiser and more congenial Dracula in Abbott and Costello Meet Frankenstein but his death in 1956 denied him the perks of the monster mania of the early sixties – an unexpected resurgence of Universal horror fueled by the release of their library to television and the cockeyed movie hosts of Shock Theaters sprouting up across the country.

Meanwhile Karloff reaped the benefits – a chilling turn in Three Faces of Fear, the host of the TV anthology Thriller and as an unexpected advocate for the counterculture on a 1965 episode of Shindig in which he warbled a shaky but sincere rendition of Monster Mash. 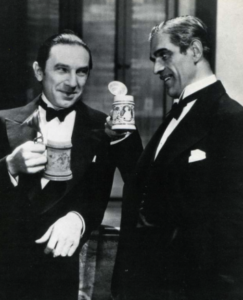 For those still swooning over Universal’s miraculous resurrection of Dracula, Frankenstein and other Famous Monsters in their 2017 Legacy editions, the new Blu ray release of these four Karloff-Lugosi perennials will be seen as a decidedly mixed bag.

The films, at worst, look quite lovely – but if there was any restoration by Shout! Factory it doesn’t appear to be as extensive as the work on the Universal discs – most noticeable is occasional film damage (there are scratches here and there throughout the films). The Black Cat and The Raven in particular suffer from occasional wear and tear and the black levels are not nearly as rich as their 2017 cousins.

Each film gets its own disc and the worthwhile supplements include Gregory William Mank and Gary D. Rhodes weighing in on their favorite hobby horses – Karloff and Lugosi respectively along with a documentary in four parts – A Good Game: Karloff and Lugosi at Universal. Rounding out the extras is a healthy selection of advertising art and theatrical trailers.

The supplements in full are:

DISC ONE: THE BLACK CAT

• Dreams Within A Dream: The Classic Cinema Of Edgar Allan Poe – Narrated By Doug Bradley (56:02)

• A Good Game: Karloff And Lugosi At Universal Part Three: The Invisible Ray (16:36)