Cecil B. DeMille delivers a satisfying western epic starring Barbara Stanwyck, Joel McCrea, Robert Preston, Brian Donlevy & Akim Tamiroff; the story of the building of a railroad is historically bogus but highly entertaining and action-filled. Joel McCrea is our favorite ethical frontier lawman; here he’s a troubleshooter keeping crooks, Indians and proto-Bolsheviks from delaying construction. The huge cast includes scores of favorite supporting actors — although the screen is so busy some of them will be hard to spot. Every time that I complained to friend and Cecil B. DeMille biographer Robert S. Birchard that the director seemed overrated, he told me that DeMille’s best films are silents that I haven’t seen. Other qualities aside, it’s usually DeMille’s politics that drove me up the wall, what with The Godless Girl and This Day and Age. I’d catch up with a turkey like The Story of Dr. Wassell, only to discover a new way to make an unwatchable movie. But there are DeMille pictures that are legit fun, and not just as retro- camp romps. Union Pacific is a big and enormously enjoyable western saga with fun characterizations and exciting incident. The stars are so likable we hardly notice the screenplay’s reactionary attitudes and shameful warping of history. The clever storyline and smart production manages to make every outrageous cliché seem like something to applaud.

I readily admit that DeMille’s bombastic, this-is-important dramatic style can work when the scripting is intelligent. In this case a charismatic cast pushes hard with their stock characters, and brings everything to vibrant life. DeMille packs scenes with people, including scores of favorite familiar character actors.

With the blessing of the President, the visionary, patriotic Union Pacific railroad forges ahead with its goal to girdle the country with rails. Locomotive engineer’s daughter Mollie Monahan (Barbara Stanwyck) was born on the tracks and represents the Irish immigrants eager to do their part in the gigantic undertaking. But shifty Eastern financiers have bet everything on the project’s failure. Stock manipulator Asa M. Barrows (Henry Kolker) hires unscrupulous gambling-hall proprietor Sid Campeau (Brian Donlevy) to slow the work progress by distracting the workers with booze and bargirls. His partner Dick Allen (Robert Preston) is only half- crooked, as he loves Mollie. The railroad hires Captain Jeff Butler (Joel McCrea) as a troubleshooter to keep peace with the Indians and get rid of Campeau and his thugs … including Dick, Jeff’s old war buddy.

Union Pacific is a rousing epic;it has an epic appeal, even in flat B&W. There’s plenty here to like. Barbara Stanwyck’s excellent acting brings to life Mollie Monahan, one of DeMille’s ultra-thin characterizations conceived to embody the ‘free spirit’ of the unwashed immigrants come to build America. The naive love triangle between Stanwyck, Preston and McCrea works beautifully and carries the picture, even though few surprises arise. The audio commentators tell us that Cecil B. DeMille originally wanted to open the film with a personal note, as he did with several subsequent pictures. The final cut does without too much directorial showboating.

Historians upset by the historical lies and distortions in Warners’ They Died with Their Boots On must have had apoplexy over Union Pacific. In this version of events the railroad is the lone progressive voice in the nation, forging ahead with the intercontinental railroad when everybody else said it couldn’t be done. It’s not about money, it’s about patriotism. The main conflict is between do-gooders fighting for America and progress, and the vermin who are against it — you know, the sinful types who make shady deals or traffic in liquor and vice.

Any high school course now teaches that the intercontinental railroad was the shady deal of the century worked up between congress and moneyed interests. There was nothing at all financially risky about it: everyone wanted to go west to shoot buffalo, mine gold and homestead. And the rail builders held firm until they won ridiculous freebie concessions from the lawmakers, including easement rights that made them the property holders of a wide strip of land wherever the railroad went — for all purposes. This is how the unscrupulous logger in Come and Get It becomes rich: he builds miles and miles of barely-necessary rail lines into virgin forest. The automatic easement rights give him full title to all the lumber on both sides of the tracks …. a free harvest of millions, and a ticket to despoil the wilderness.

It’s hardly news that a Hollywood western might whitewash history. The western genre has an elevating and forgiving nature that generously embraces historical myths. I’d bet that the average moviegoer, snowed by DeMille’s sterling reputation, believed that this was an accurate telling of the building of a railroad. No producer ever got rich telling audiences that the foundation of America had ‘issues.’ And it’s highly likely that the real Union Pacific company backed DeMille’ show as excellent public relations. 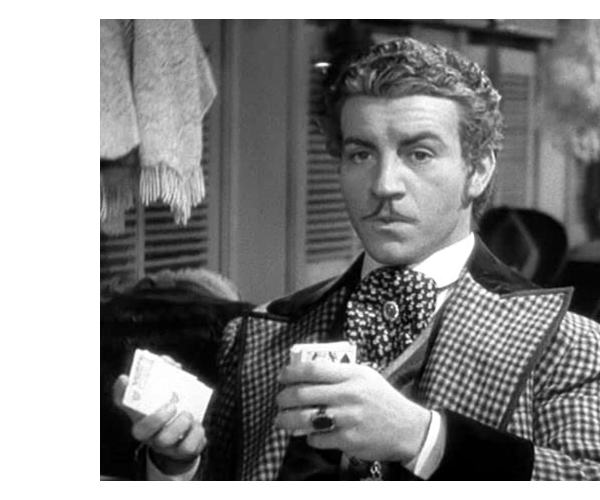 Union Pacific is more than sufficiently entertaining to let us put all of that aside. → Young Robert Preston (The Music Man) is a colorful good/bad guy, a murderer melodramatically redeemed by the love of a good woman. Of course, Joel McCrea’s lawman Jeff Butler redeems them both. McCrea is as virtuous as Gary Cooper without the noble posing, and as sentimental as James Stewart without the sad-eyed pitch for pathos. We forget that he’s basically a hired killer, a ‘regulator’ on the payroll to ‘shoot trouble.’ Possessed of a pure heart and unsurpassed in his gun-slinging skill, Jeff is a western natural. (spoiler) He outfoxes the rest of the bad guys with the help of two unwashed but immensely likable backup men, Lynne Overman’s Leach and Akim Tamiroff’s “Fiesta.” And Butler blasts down the despicable killer Jack Cordray (C.B.’s son-in-law Anthony Quinn) with an enviable backwards-facing fast draw. You tell ’em, Jeff.

True to his conservative roots DeMille also depicts McCrea as a tough-guy strike buster. A goonish agitator at the rail head stirs up the unpaid, rebellios workers, and proves himself a typical Bolshevik by encouraging the workers to break their tools. McCrea puts paid to him right away. The scene looks harmless unless one knows DeMille’s politics during the Depression. Big industry colluded with law enforcement in the illegal suppression of the labor movement, labeling it as Communist agitation and sending in troops with machine guns to put it down.

And how does the big villain fare?  The screenplay exonerates Barrows, the rich swindler responsible for many deaths. Instead of pushing Barrows in front of a train, Leach and Fiesta force him to walk 26 miles of track resetting loose rail spikes. Through his honest sweat-atonement, Barrows somehow atones for his crimes; he hammers the final golden railroad spike like a pro. The big business crook Barrows is too big to fail, above the law.

DeMille certainly delivers the action. The movie has two or three exciting finales — robberies, a train wreck and an Indian battle. The typical dumb-Indian humor is fairly restrained. We see braves react with shock at the sight of a cigar-store Indian. When raiding the goods on a train they’ve wrecked, they fasten ladies’ corsets around the necks of their horses. Yet they’re smart enough to overturn a giant water tower to derail the train. The film really just uses the Indians as an opportunity they afford for action. They’re not a problem until Sid Campeau’s thugs cause trouble. Both this film and John Ford’s Stagecoach use the ‘save the last bullet for the virgin’ gag when it looks as if all is lost. It doesn’t work quite as well here. Who could shoot Barbara Stanwyck, even if she’s passively asking for it?   (and don’t say, Fred MacMurray.)

One has the feeling that DeMille hired actors that needed little or no direction. Barbara Stanwyck rises to the challenge of the ‘spirited’ Molly. Robert Preston succeeds at making Dick Allen both charming and villainous. Brian Donlevy is a class-act bad guy, as is usual, and Akim Tamiroff again provides a highly entertaining ethnic character, with built-in comic relief. The group chemistry works much better than the weird mismatch of performers seen in Selznick’s Duel in the Sun.

Union Pacific has big sentimental value for this viewer: the casting of a favorite cowboy star. Joel McCrea made many westerns, of various sizes. This epic makes a fine comparison with McCrea’s farewell masterpiece Ride the High Country. That film’s impoverished but noble old-time lawman could very well be Jeff Butler 25 years later. The old studio system encouraged typecasting to the point that the films of a star like McCrea could almost represent individual chapters in a single biography — perhaps Jeff took to preaching for a few years, an effort recorded in Jacques Tourneur’s Stars in My Crown. If the timelines and wives aren’t consistent, the McCrea character certainly is. We love Peckinpah’s retiree-gunman, and seeing him so young back in his prime is a lift to the spirits.

The KL Studio Classics Blu-ray of Union Pacific is a fine remastering of this best of DeMille’s B&W action-historical epics, with good contrast and detail, and very clear audio. Filmed all over California and Utah, it combines beautiful location scenes with clever rear-projection work on Hollywood stages. DeMille crowds his sets with extras. Sometimes hundreds are jammed into ornate saloons or working loading and unloading train cars.

An appropriately spirited audio commentary is provided by Dr. Eloise Ross and Paul Anthony Nelson. They begin by noting the main titles, which are arrayed very similarly to the text crawl that opens Star Wars. It’s a good conversational track that fills in production details and calls out many of the film’s dozens of name character actors.

A tall stack of trailers is included as well.