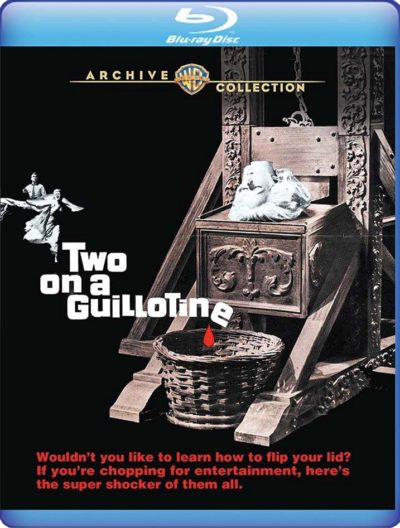 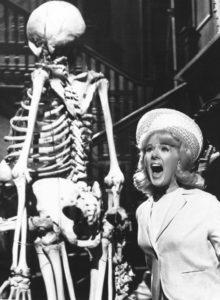 Imagine shock-meister William Castle directing a Disney movie and the result might be something like Two on a Guillotine. William Conrad, narrator of Rocky and Bullwinkle and star of television’s Cannon, is at the wheel of this thrill ride and he’s happy to rehash a few of Castle’s favorite scare tactics for his own purposes – the moans and groans of a carnival spook house and even a wire-drawn skeleton. There’s no denying Conrad’s effort has some of the Saturday matinee charm of creep shows like House on Haunted Hill but the sunny locales and aggressively perky demeanor of co-stars Connie Stevens and Dean Jones make you wish Frederick Loren would drop by with a well-aimed champagne cork.

Stevens is Cassie Duquesne, the daughter of the recently deceased John Harley Duquesne, a legendary magician who’s vowed to return from the grave and wants Cassie on hand to greet him. To make sure she does, Duquesne put a catch in his will – in order to claim her inheritance Cassie must take up residence in a mansion far beyond the city limits where, apparently, no one can hear you scream. Jones plays the over-eager reporter who tags along for the story and some after-hours canoodling with the warlock’s daughter. 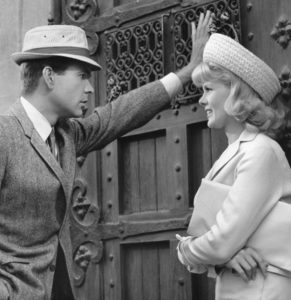 A tuxedoed Cesar Romero plays both the living and undead Duquesne and he spends the bulk of the film out of sight but not out of mind – the house is regularly rocked by bumps in the night and the skin-crawling wails of a tormented ghost. A disembodied head careening down a staircase ramps up the anxiety level and that airborne skeleton helps chase at least one cleaning lady from the premises. The late night arrival of her childhood nanny – a deranged harridan played by Virginia Gregg – is the cherry on top of Cassie’s frightmare.

This was the first of three low budget shockers Conrad made for Warner Bros. in the wake of Castle’s success with similarly styled thrillers. Rather than rely on golden age stars like Vincent Price, Conrad employed teen-friendly heartthrobs Troy Donahue, Joey Heatherton and Jeffrey Hunter (such casting was typical of the era – AIP focus groups determined horror movies fit the same drive-in demographic as their beach party product). Produced in a whirlwind, Two on a Guillotine, My Blood Runs Cold (with Donahue and Heatherton) and Brainstorm (starring Hunter), were released in January, March and May of 1965. Conrad’s television chops helped him speed through those productions and though his stripped-down approach was a good fit for the TV dinner crowd (he specialized in crime-busters like Highway Patrol and Naked City) he was stymied by the big screen  – he lacked Castle’s go-for-broke chutzpah. 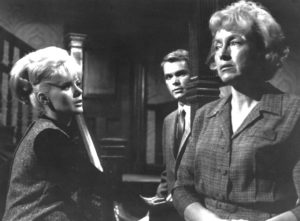 Conrad’s real passion bubbles up in his love for Hollywoodland itself, training his camera on one L.A. landmark after another (he would have been a big fan of Once Upon a Time in Hollywood). There are extended stops at the Hollywood Forever cemetery (where Duquesne’s funeral is held), The Hollywood Bowl (where the magician’s will is read) and Pacific Ocean Park (where Conrad makes his own cameo in a funhouse mirror.) The fabled Benedict Castle in Riverside, a sepulchral manor of Spanish-Moorish design, is key to the film’s impact – its facade stands in for Duquesne’s haunted house where the mad magician will make his supernatural comeback.

The movie is peppered with familiar characters actors like Parley Baer, Connie Gilchrist (as the scared stiff maid) and Gregg herself who lends some Hitchcockian gravitas – she was the voice of Norma Bates. Del Moore and George N. Neise, perennial foils of Jerry Lewis and The Three Stooges, appear along with John Hoyt as the lawyer who reads Duquesene’s will on stage at the Bowl. 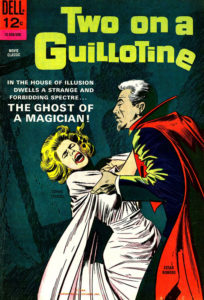 Some real Hollywood magic is promised with legendary composer Max Steiner contributing the score. It was his final movie soundtrack but his typically stentorian approach is oddly muted for the man who gave King Kong his marching orders and wrote the Warner Bros. fanfare. The perfunctory script, a hodgepodge of moldy haunted house cliches, was cranked out by John Kneubuhl and Henry Slesar. The screenplay was very loosely based on a few elements from Slesar’s short story Legacy of Terror, first published in Amazing Science Fiction Stories in 1958.

Warner Archive’s new Blu ray release is more bare-boned than that flying skeleton – a theatrical trailer is the only extra – but it’s a beauty. The transfer of Sam Leavitt‘s black and white photography is immaculate. Leavitt (behind the camera for Shock Treatment and Anatomy of a Murder) gives this lightweight spook show the stately veneer of a horror classic.