Ready for more Anthony Mann? This light comedy thriller / borderline noir leans on amnesia for a plot hook and to motivate an all-night prowl on the streets of Los Angeles the RKO back lot. Tom Conway and Ann Rutherford star, but the real thrill is in the secondary female leads — Jean Brooks from the Val Lewton movies and dreamy Jane Greer in her billed feature debut. 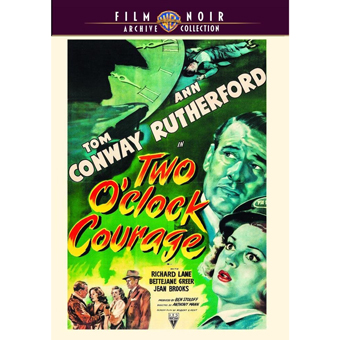 This disc will get immediate attention from fans of director Anthony Mann. Another of Mann’s early efforts Strangers in the Night came out a couple of years ago, but this one is more accomplished, and more entertaining. An amnesia-based comedy murder thriller, it’s perhaps too shallow to be labeled a noir, despite having several of the classic earmarks. But the amusing Two O’Clock Courage really comes across with surprises among its cast members. Tom Conway is far more lively and charismatic than usual, while interesting input is offered from ex- Fox and MGM contractee Ann Rutherford, Val Lewton’s mystery woman Jean Brooks, and a debut billed appearance by one of the sexiest hot numbers in the noir canon, Jane Greer. Only she isn’t yet going by her final name. 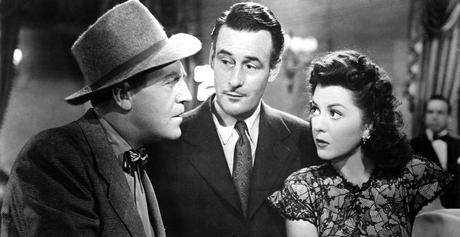 The screenplay is co-authored by Robert E. Kent, a writer who contributed to several top noirs before becoming a ’50s writer-producer of crime, juvenile delinquency and monster movies. Wandering dazed and confused, a man with amnesia (Tom Conway) is picked up by the spunky lady taxi driver Patty Mitchell (Ann Rutherford). She spends the night chauffeuring him around town in an effort to learn his identity – and to find out if he is guilty of a murder, as the radio is reporting. Learning out that his name is Ted ‘Step’ Allison, they visit with a producer and meet a couple of actresses that may be tangled up in the killing as well. Step is a suspect in the eyes of the garrulous Inspector Brenner (Emory Parnell), and a newsman keeps finding Step in compromising locations, like the murdered man’s apartment. Patty tries not to be jealous of slinky brunette Helen Carter (Bettejane Greer), a climber who warms up to Step until she finds a better pigeon in the producer. Actress Barbara Borden (Jean Brooks) suspiciously avoids contact with Step. Slowly regaining his memory with Patty’s help, Step crisscrosses the town hoping that he can solve the mystery before Inspector Brenner figures out who he is, and arrests him for murder. 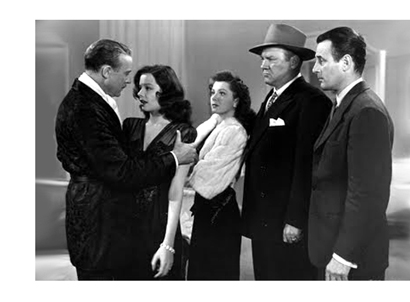 Being that it’s at heart a light comedy, Two O’Clock Courage isn’t exactly a mainstream film noir, but its visual style and amnesia theme make it something of a noir-lite. Step Allison doesn’t suffer his loss of memory as an existential crisis, but more of a nuisance to be overcome. Urbane, fairly unflappable, he’s willing to accept culpability should it turns out that he’s a bad man or a hardened killer. Perky cabbie Pattie (PCP?) is the one to insist he stay on the lam until he can do what all mystery thriller heroes think they can do, clear their name via creative self-investigation.

The production gives us a half dozen acceptable interiors, including a fairly decent restaurant in full swing, and some handsomely filmed night exteriors on the RKO back lot, presumably the Pathé lot in Culver City. The mysterioso music score by Roy Webb appears to be 100% recycled cues. I’m not normally sharp-eared on film music but several bits of music from The Seventh Victim are definitely present. The editors were at least smart enough not to track any of those cues behind actress Jean Brooks, or fans of that Val Lewton movie might be confused. 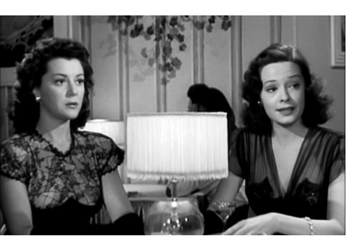 Tom Conway often plays stuffy, closed-off men with a slightly snobbish air, so it’s refreshing to see him so actively expressing Step Allison’s emotions. Conway pulls faces of surprise, delight, embarrassment and levity all through the film. He and Ann Rutherford make a halfway cute couple. The screenplay is perhaps a bit too jokey, and Anthony Mann may not be the perfect candidate for light comedy. Emory Parnell does a lot of yelling at his subordinates and the comic-relief newspaperman. The overall feeliing is of an attempt at a slightly screwball vibe that doesn’t fully come off. The words and situations just aren’t witty enough. 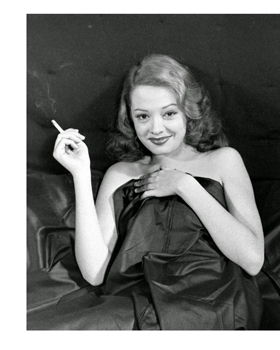 But the special surprises in the cast save the day. Jean Brooks isn’t around for long, but a couple of scenes in the second half feature a lot of Jane Greer, in her first credited performance. Slinking about in a hotel’s bar-nightclub, Greer is a sheer wonderment. The movie jumps to a new level of interest, immediately. Conway is mesmerized by this female vision — then only 21 — who looks at men with eyes that seem to say, “I’ve done everything you can think of and I really know how to enjoy myself.’ Greer would be the epitome of seductive glamour in Out of the Past, and we get a partial return to form in a couple of additional noirs. But the fine actress was criminally underused: they put her in Dick Tracy movies, for crying out loud. By 1950 Greer was being cast as innocuous girl friends and wives. Almost thirty years later she appeared in the retro-noir The Outfit. Even playing middle-aged, she matched looks with women half her age. Pal Rocco Gioffre asked her to sign an autograph for me once, but I was too much of a stoop to go see her in person.

Anthony Mann keeps things moving, an accomplishment considering that there are no action scenes per se. The director’s knack for staging violence is still a thing of the future. Two pictures later Mann showed his expressive side with the slightly daffy budget noir Strange Impersonation. Not long after that came the collaboration with ace cameraman John Alton, which sparked his quick rise to near the top of the directing game. Two O’Clock Courage is a lightweight who-dunnit with serious compensations in its cast, and can be recommended to more than just the fans of Anthony Mann.

The Warner Archive Collection DVD-R of Two O’Clock Courage looks pretty good, with fairly clean elements given a rich transfer. Cinematographer Jack Mackenzie (Isle of the Dead) is no John Alton but the film has its own rich look. Mann and Mackenzie make sure that the opening shot, a view of the amnesiac Tom Conway walking away from us down the sidewalk, has a strong graphic impact.

There are no extras. The cover illustration is one of those great RKO stone litho poster treatments from the 1940s. This is the kind of disc one might affix a sticky note to, reading, “Jane Greer shows up at forty-seven minutes in.”