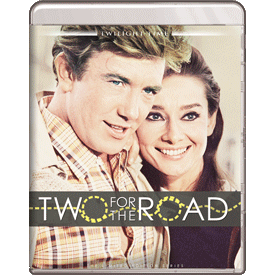 Some so-called sophisticated ‘sixties romantic dramas have dated pretty badly, as it’s not easy to create a movie acceptable to a fickle audience, that doesn’t end up with attitudes, politics or even costumes that don’t look ‘wrong’ just a few years later. I’ve found that enjoying Audrey Hepburn’s Breakfast at Tiffany’s takes a conscious act of selective blindness. The music, the style, the images were swooningly vital to an audience perhaps ten years older than this reviewer. Hepburn’s ravishing Holly Golightly misses the book’s character by a wide mark. Romantic clichés soon takeover, along with Mickey Rooney’s terribly miscalculated ethnic comic relief. 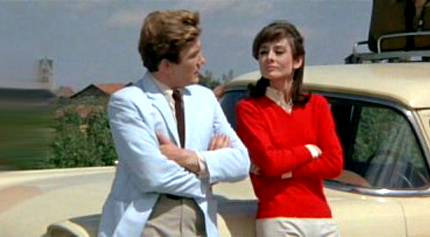 Hepburn’s Two for the Road once felt strained to this viewer, but no more. Frederic Raphael’s top-drawer screenplay retains an engaging tone while mixing insightful marital observation with satire and slapstick. The show also has a surprisingly adult view of infidelity. That’s adult, not licentious. Now that I’m older I no longer resent the idea that there exist people that get to tour France every few years… I think I first saw Two for the Road with a completely different mindset.

The story confects an engaging narrative structure. Albert Finney and Audrey Hepburn are a romantic couple viewed exclusively through four different road trips through France at different stages of their relationship. Architect Mark Wallace and his wife Joanna (Albert Finney and Audrey Hepburn) speed toward a party given by Mark’s wealthy benefactor, Maurice Dalbret (Claude Dauphin). As they consider getting a divorce the trip becomes mixed up with other cross-country memories from earlier days: when they met on the road, with Joanna separated from a choir stricken with the chicken pox; travelling with the annoying Americans the Manchesters (Eleanor Bron & William Daniels) and their brat of a child; footloose in an unreliable MG roadster; and an unhappy trip traveling with their young daughter. 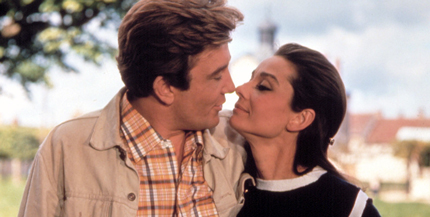 Two for the Road still makes us sit up and pay attention. Screenwriter Raphael maintains control over the central time-tripping gag. Mark and Joanna will be sitting in their junky sports car when a fancy Mercedes passes. One hard cut later and we’ve jumped to the future when they are riding in the Mercedes. Raphael and Donen pitch the time-switch transitions fairly well. The loving couple with their fun times and rough spells don’t seem to realize that the road they’re traveling is a time machine connecting the past and the future … it’s the Road of Life, get it?

Kurt Vonnegut and Joseph Heller surely approved of this storytelling method, which allows for maximum flexibility while keeping the tale from flattening out into linear episodes. Instead of a standard flashback structure, everything in the movie is a flash- something or another, backward or forward. 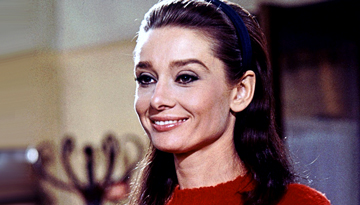 The device helps us to pay attention, as we never know how long we’ll be in one time frame. Finney and Hepburn make an extremely attractive couple. They’re initially thrown together by the unpredictable chicken-pox virus, which decimates the rest of Joanna’s choir group, including gorgeous Jacqueline Bisset. Soon it’s just Joanna and Mark hitchhiking together, and they quickly become inseparable. Joanna is actually the more adventurous of the two. Mark is overly moody and somewhat full of himself, and for a few minutes it looks as if he’d rather go on the road with Ms. Bisset. The actual initial meet-cute between Joanna and Mark uses the device of a misplaced passport, a theme that follows them the rest of their lives. Every time Mark is convinced that he’s forgotten it, Joanna reveals that she’s had it all along. At first the gag seems overworked, until the passport becomes an object correlative for nagging relationship snags. Mark is thoughtless and takes too much for granted. Does Joanna silently gather up his passport to be helpful, or just to prove for the twentieth time that he’s an unappreciative dolt?

The time-shifting story structure invites a score of visual comparisons that remove the need for additional ‘relationship’ dialogue. They start off with one small bag but subsequent trips require more and more luggage. What eventually becomes a predictable air-conditioned traveling arrangement begins with crazy adventures in the rain. Everywhere they go they see examples of other marriages – bored couples, newlyweds and the horrible Manchesters, obnoxious Americans imposing their narrow views and their vile daughter on everyone within earshot. In the kind of debacle that inexperienced or intimidated tourists surely endure, they sneak cheap food into their posh hotel room because the in-house meal rates are prohibitive. On checking out they discover that gourmet dining was included in the room rates.

Two for the Road has a lot of well-timed comedy but also a tendency for lame slapstick. Joanna and Mark fall or are pushed into pools and the ocean about five times too often, which isn’t bad considering how freshly the actors perform such slapstick duties. Eleanor Bron (Alfie, Donen’s Bedazzled) and William Daniels (The Graduate) are Ugly Americans providing a world-class bad example for marriage, and stop just short of being a ludicrous satirical exaggeration. Unfortunately, people exactly like the Manchesters are all too real.

Joanna and Mark are far from perfect themselves. Mark is predictably the butt of jokes when he panics over his lost passports and lets his bad temper get them kicked out of hotels. He conducts half his dialogue in a Humphrey Bogart accent. Bogie was just being rediscovered in 1966, which may have made the accent jokery funnier in context. As Finney has since played several half-comic roles using a similar voice, some viewers might not catch on. 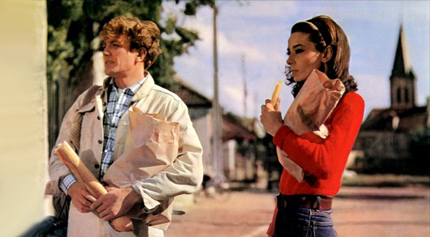 Frederic Raphael’s screenplay exhibits extraordinary integrity with its adult content. Mark is no saint, as seen when a silent-movie style flirtation between two cars ends in him eagerly taking in an extramarital one-night stand. Joanna’s character at first seems a bit too faultless to be true. But her ‘adventurousness’ mellows into an outright courage of convictions. At one point she’s attracted to a young Frenchman. When she admits to Mark that she’s slept with him, every female in the audience will hold their breath. Joanna shows no shame whatsoever — Mark has been ignoring her pleas to put their marriage in order, and she has strayed partly to test him. Does he really care about the marriage? Mark must concede that the old rules are no more. Nowadays, one takes a partner for granted at one’s peril. If anything, he needs her more than she needs him. These scenes banish the idea that Two for the Road is going to resolve as a light-snack romance. The show is far more sophisticated than melodramas that try to shock us with racy marital crises.

And it’s more honest about the double standard, too. Mark’s own dalliance is not at all a source for guilt, or something he feels he must reveal. Although it never becomes an issue, the audience surely remembers that Mark is not an innocent husband.

Perhaps Audrey Hepburn is the key to this film’s interesting attitude toward matrimonial fidelity. She personifed an image of perfect womanhood going back at least to 1953’s Roman Holiday. Women looked up to Hepburn as the pinnacle of grace and charm, a 1950s romantic sex symbol that provided an alternative to the blonde bombshell Marilyn Monroe image. Here it is thirteen years later and Hepburn still convinces as a college-age woman. Hepburn was actually seven years older than Finney. The credits list seven or eight designers, and Hepburn looks great in everything she wears, even the dated Mod fashions. If there is a fault to the basic framework of Two for the Road it’s that Joanna still seems relatively flawless. But there are a great many relatively flawless women about. Women like Joanna are the ones to keep, whether they stray or not.

The Twilight Time Blu-ray of Two for the Road is yet another sparkling presentation; Fox’s remastering efforts make this Color & Panavision gem look better than ever. For a picture of this age, the restored image is very good. And the added HD resolution lets us read facial expressions more clearly in wide shots. Christopher Challis’ cinematography must have been a major stimulant for French tourism. I don’t remember Henry Mancini’s music being all that memorable, but it does communicate the right romantic moods.

TT retains an older Stanley Donen commentary, and adds another with Nick Redman and Julie Kirgo — it’s a title well suited to their strengths. A Movietone newsreel isn’t a finished item but a string of Oscar acceptance shots, with Hepburn and several other big stars. Julie Kirgo’s liner notes get deeper into the puzzle that is Frederick Raphael, whose award-winning screenplay for the previous year’s Darling is a far darker item. He’s a fascinating writer; his book on his effort to collaborate with Stanley Kubrick is a very good read.

It would be great if Twilight Time could nab for Blu-ray Stanley Donen’s wonderful comedy Bedazzled with Peter Cook and Dudley Moore — with an Isolated track for Moore’s music score, that would be a real collector’s item.