Brian Trenchard-Smith’s outrageous futuristic gore-fest imagines an Australian extermination camp run by the sadistic Michael Craig and Roger Ward, where jaded rich folk come to hunt human prey. The leading targets for this week’s jaunt are Steve Railsback and Olivia Hussey. It is snarky? Is it subversive? An alternate title was Blood Camp Thatcher! 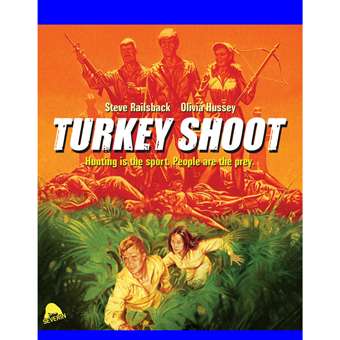 Who cannot appreciate a movie that carries the alternate title Blood Camp Thatcher? That alone made me want to see this 1,001st revisit of Richard Connell’s old “The Most Dangerous Game” story. That and the personality of Brian Trenchard-Smith, a maker of mostly action-exploitation movies who gives such erudite, compelling mini-lectures at Trailers from Hell. As we learn in the extras, Trenchard-Smith started out to make a much more elaborate picture, “with ideas.” A drastic last-minute slash to the production budget and shooting schedule left him with a bare-bones gore/exploitation movie, and little time to finesse anything. As it turned out, action audiences in 1982 were looking for exactly just such a gross-out epic, and Turkey Shoot became a hit in Australia and England.

The show begins with a news film montage of violent riots and demonstrations from around the world. That serious opening soon devolves into a cartoonish send-up of jungle prison movies. In 1995 a repressive Australia rounds up anybody that doesn’t conform and ships them off to correction camps, where sadistic wardens and their perverted staff abuse, torture and kill to their hearts’ content. In for running a secret anti-government radio station, Anders (Steve Railsback) has busted out of several camps and swears he’ll split from this one too. Walters (Olivia Hussey) was arrested almost arbitrarily, and now faces the daily threat of rape. The guards Ritter (Roger Ward) and Red (Gus Mercutio) welcome beautiful Rita (Lynda Stoner), another looker to be sexually harassed. Warden Thatcher (Michael Craig of Mysterious Island) has more elaborate plans. To please the perverted District Camp Secretary Mallory (Noel Ferrier) Thatcher authorizes a ‘turkey shoot,’ giving five inmates a chance to run for their lives. Mallory, Thatcher, Ritter, Red and the decadent wealthy guests Jennifer and Tito (Carmen Duncan & Michael Petrovich) get the luxury of hunting them down, armed with various weapons. The prey are given a head start, and told that they have a chance to earn their freedom — a total lie. 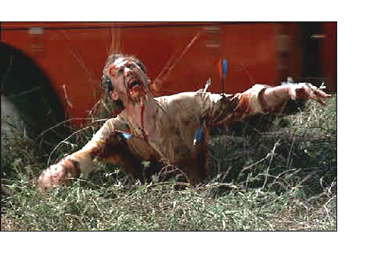 Take away the cartoon trimmings and the basics of Turkey Shoot are happening here and there in various places around the world — people are so desperate we wonder why more of them don’t turn to violence. There’s enough bad taste to get any critic upset. Some concluded that producer Ginnane’s movie was an escapist concentration camp romp, and therefore a tasteless abomination. The concept from Connell’s The Most Dangerous Game has been around a long time. Starting with the great Merian C. Cooper version, it’s been remade or adapted innumerable times. I’m partial to Roy Boulting’s Run for the Sun and grudgingly admire qualities in Kinji Fukasaku’s extreme Battle Royale. Minus whatever political or philosophical finesse that was left behind, Turkey Shoot most closely resembles Peter Watkins’ harrowing Punishment Park (1971), which proposed that Richard Nixon was considering opening detention camps for hippie radicals. The politics in this Aussie dystopia is mostly generic, despite the name given the sadistic camp warden. A wealthy class criminalizes dissent, and then turns the dissenters into expendable playthings.

Director Trenchard-Smith’s cast signed on to perform more dramatic scenes, only to be told the budget compromise mandated a more exploitative parade of nudity, violence and gore. The nudity is downplayed, and appears to use doubles for some of the leading actresses. The jolly filmmakers try to make up for with overall gruesomeness. One man is burned alive — sorry, make that two men. Two more people are riddled with crossbow bolts. A man is run over by a truck and another bisected with the blade of a skip-loader tractor. The sickest most clever bit of mayhem involves a man left rigged into a booby trap — he knows that his friends’ attempt to rescue him will trigger the trap, but he’s been gagged and has no way of warning them. 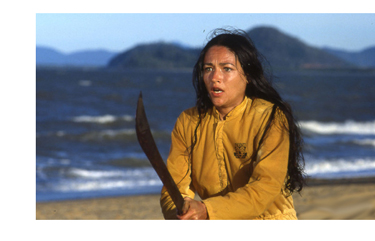 Characterizations are pared down to basics. The sadistic elites are given rather silly double-entendre sex talk to make them seem more perverted. Carmen Duncan is fairly effective as a one-note fashion-conscious sadist, but her deviancy goes unexplored — she does god-awful things to one female victim, but not on camera. Michael Craig comes closest to putting a real character together, but it’s as if the speeches where people explain themselves are missing. When his turkey shoot goes really badly, Warden Thatcher only seems inconvenienced.

The production makes its concentration camp mostly out of some light tents and an electric fence; the effects boys have rigged up a couple of okay futuristic vehicles. The inmates wear yellow jumpsuits and the guards are in tunic outfits that seem thrown together. Trenchard-Smith gets a lot of mileage from the his crowd scenes — we’re told he had a reasonable number of extras for only an extremely limited time. A little looks like a lot, even if the overall effect is of a TV-show version of Logan’s Run.

The action all looks fine, with many explosions, gunshot wounds and other battleground effects; Trenchard-Smith also directed the active The Siege of Firebase Gloria, and knows well how to stretch the gunpowder and stunts. Terry Needham was one of his stunt arrangers. We’re told that a full battery of stunt people couldn’t be hired, which left the reluctant Oliva Hussey to do her own violence scenes. According to fellow actor Roger Ward, when directed to cut a man’s hands off with a machete, Hussey was so traumatized that she almost swung the blade at the wrong time.

A lot of the acting (and dubbing) is weak, and some of the gore effects are better than others. One of the ‘guest hunters’ for the Turkey Shoot has brought along what he calls a circus freak, a cat-eyed monster man who seems to belong in another movie. He reminds us of one of the Manimals in the Burt Lancaster Dr. Moreau remake. The makers of Turkey Shoot needed to come up with a commercially viable Ozploitationer, and succeeded. Mr. Trenchard-Smith may have wished he weren’t quite so deep in the action-gore groove, but he gave a bad situation a major effort and pulled the movie through. 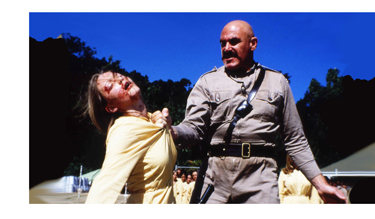 Severin Films’ Blu-ray of Turkey Shoot looks great — it’s a really beautiful transfer from 35mm Panavision elements in excellent condition. It’s also uncut; extending the movie beyond the heavily censored version shown in the United States. Ten minutes were taken out, and it’s not difficult to point to the salacious material that was likely dropped or shortened. It must have been a really frustrating viewing experience. Brian May’s active music takes a martial cue, making the proceedings look more dignified.

Severin incorporates the Evil Death Camp’s signage logo into the disc’s FBI disclaimer, right up front on the disc. Maybe some of the inmates in Thatcher’s coop are video pirates?

The extras benefit from Severin’s great relationship with the ’70s and ’80s ‘Ozsploitation’ filmmakers, led by the new-generation director Mark Hartley, whose docu Not Quite Hollywood tells the whole tale of extreme down-under filmmaking. Brian Trenchard-Smith is present for a full commentary and on many of the extras, explaining how the movie came about with candor, clarity and a fine speaking voice. Some of the actors get their say in a making-of featurette docu, including Lynda Stoner, who is still upset at having to strip off for one scene. Was she really pulled into an exploitation movie without things being explained ahead of time? Trenchard-Smith explains that, in addition to having to stretch thirty extras to fill a set built for hundreds, he had to deal with the ‘difficult’ actor Steve Railsback.

Perhaps a hint of the original intent can be seen in the character of Griff (Bill Young), a confirmed rebel who knows the turkey shoot is a no-survival game. He warns Rita to stay away from him for her own protection. Railsback’s Anders is the loudmouth dissident but Griff seems a more committed type, almost too serious for the movie as finished. Perhaps the back stories would have fleshed out the movie more. As it is, it retains a ripe reputation as a gore fest.