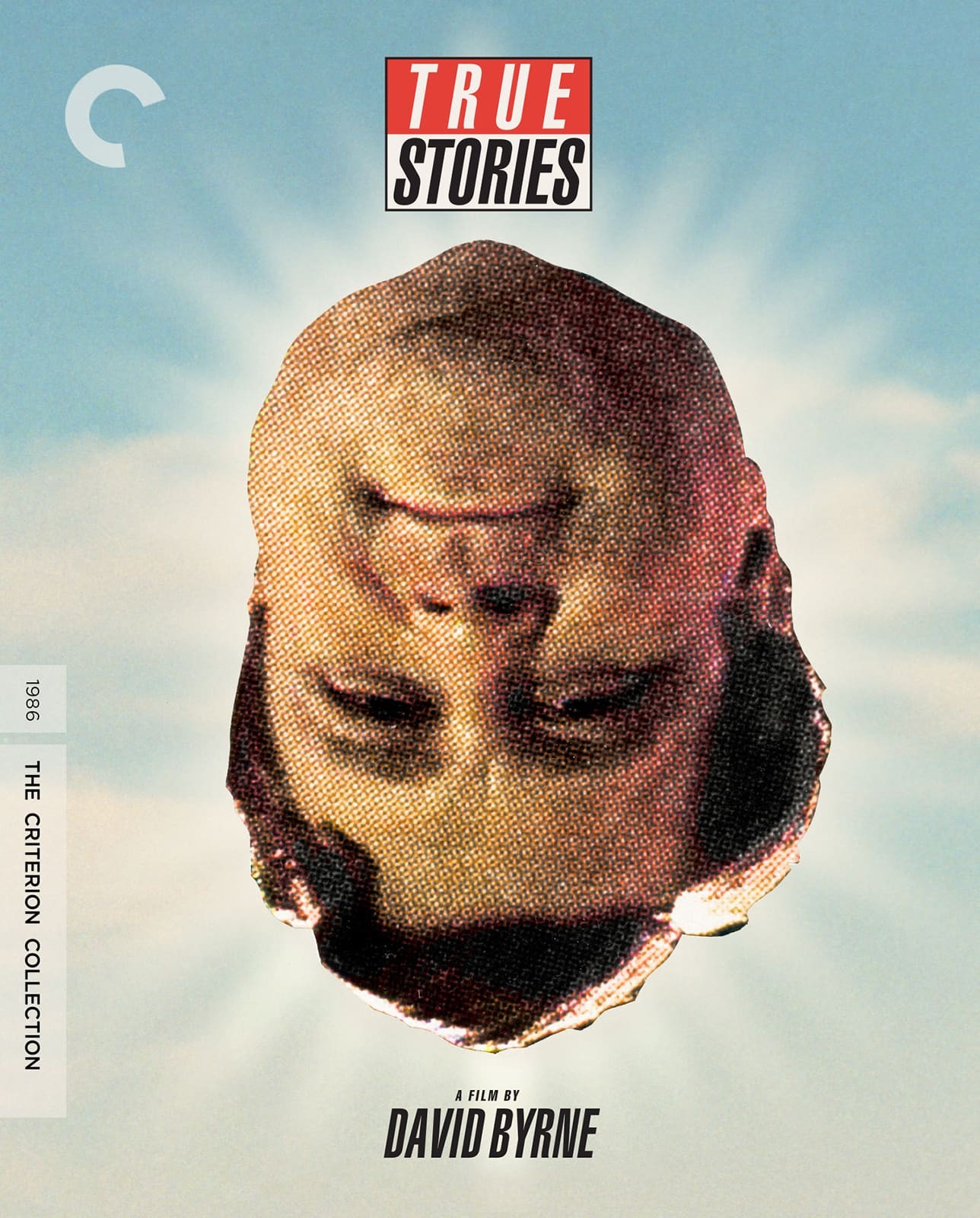 A concert film filmed over four nights at the Pantages Theater in 1983, Jonathan Demme’s Stop Making Sense has the redemptive quality of a classic noir – as Talking Heads’ music churns from slow simmer to barn-burning tent-show revival, band leader David Byrne contends with his own Hollywood style character arc – at movie’s end the “tense and nervous” loner has reclaimed his soul in more ways than one. 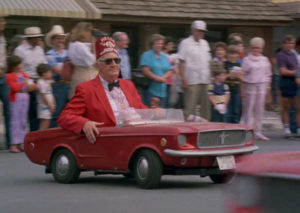 The success of Demme’s film lead to Byrne’s next incarnation, as a movie director and oddball tour guide investigating a small southwestern town in 1986’s True Stories. Animated by unpredictable mood swings, quirky tempos and cosmopolitan naiveté, it’s the cinematic equivalent of a Talking Heads song.

After an introductory film within a film that hints at the oddness to come, Byrne materializes behind the wheel of a large automobile on the outskirts of Virgil, Texas, a southwestern Neverland preparing for its 150th anniversary – a “Celebration of Specialness.”

Cluttered by cookie cutter tract homes and homogenous storefronts, the dusty burg is home to a cross-section of dreamers, poets and artists disguised as lovelorn good old boys and agoraphobic Southern belles – each with backstories worthy of the Weekly World News (Byrne based the characters on his ever-expanding collection of tabloid clippings). 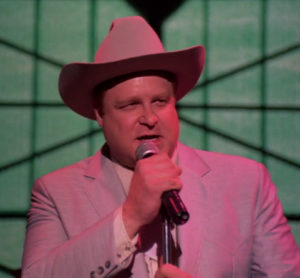 Byrne wrote the songs for the soundtrack which help to break up the film’s occasional longueurs – most of the numbers are sung by the actors themselves (along with toe-tapping cameos from Talking Heads in various disguises). Those musical detours – Byrne bluntly describes his film as a “musical comedy”- help to flesh out not only the film’s characters but his own intentions, skewed and occasionally oblique as they may be.

Less Afro-centric and polyrhythmic than his work with producer Brian Eno on Speaking in Tongues and Remain in Light, the sounds of True Stories are fundamental American style rock n’ roll – which in this case means a multi-culti stew of pop, Tex-mex, gospel, funk, R & B, soul and kindergarten sing-a-longs – there’s even a steel guitar ringing out from the movie’s countrified signature song People Like Us.

The man who croons that heartfelt anthem is Louis Fyne, a sweet-tempered country cousin played by John Goodman and pleased as punch with his own “consistent panda bear shape.” Louis has recently put his search for a mate into high gear – including a lit-up lawn sign advertising “wife wanted” and a public access video touting his matrimonial bona-rides.

Holed up on the posh side of the tracks is a woman too wealthy to get out of bed played by Swoosie Kurtz – her caretaker and confidente is a benevolent shaman played by the ever-serene Pops Staples. Spalding Gray (who just naturally lapses into quasi-mystical monologues) and Annie McEnroe are a seemingly content couple who haven’t conversed in 25 years. They’re all good company without a mean bone in their bodies – like G-rated versions of a John Waters character. 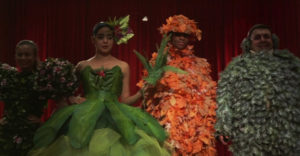 McEnroe also presides over a fashion show at the local mall where locals strut the catwalk garbed in increasingly jaw-dropping costumes ranging from towering headdresses that would upend Carmen Miranda to a suit made entirely of freshly grown grass. The sights and sounds of the mall itself are 1986 preserved in aspic – when was the last time you thought about Camelot Music or Waldenbooks?

The song McEnroe is given to sing, the bittersweet Dream Operator, underlines the complicated inner lives of these simple folk while accentuating the cuckoo cloud universe they inhabit – but the real dream operator is Byrne himself – the man both behind and in front of the curtain. Never one to forget his art school cred, the musician relied on artists as varied as Robert Rauschenberg and Howard Finster for the Heads’ album covers and enlisted art house faves like Jim Jarmusch to direct their music videos.

Byrne’s approach on True Stories is no different and though his fondness for what Jean DuBuffet called “raw art” is obvious, he wisely avoids kitsch to score cheap shots – there are no plastic couch covers, aluminum Christmas trees or black velvet paintings littering the landscape (though Elvis-centric religious memorabilia makes occasional appearances). 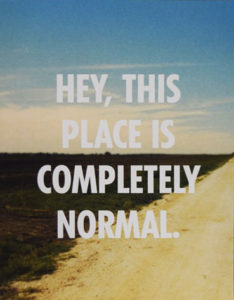 Like the tabloids it parodies, the film binges on the fringe – case in point the frenzied preacher who hawks outlandish conspiracy theories from the pulpit (enough fodder there for a separate film). But True Stories is at its most discerning and poignant in revealing how our culture – high and low – is commodified via billboards, signage and commercials – in other words, how dreams are corrupted.

Byrne ambles through this landscape dressed like the announcer at a rodeo – an alien’s notion of a what a Texan should look like – indeed his friendly but removed demeanor recalls that other visitor from outer space, Michael Rennie’s Klaatu of The Day the Earth Stood Still. At film’s end, the musician is back on the outskirts of town, just an animal looking for a home – maybe he identifies with the townsfolk of Virgil more than he lets on. 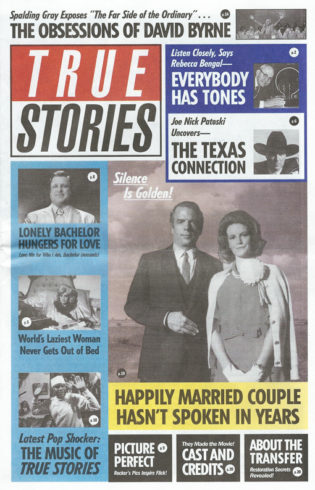 All of Byrne’s co-creators, including Lachman and Kalman, are given their due in the extras for the superb new Blu ray package from Criterion. And all praise to that invaluable outfit, they’ve finally made the film’s soundtrack (original songs, movie versions and incidental instrumentals) available on a separate CD.

That CD is folded within a miniaturized newspaper tabloid that recalls the 1978 National Lampoon Sunday Newspaper Parody. The mock scandal sheet contains essays on the film from Rebecca Bengal and Joe Nick Patoski and archival notes from Spaulding Gray and Byrne.

Other supplements include an exhaustive making-of documentary with an unusually forthright David Byrne and his co-conspirators including Lachman and screenwriter Stephen Tobolowsky (whose original screenplay written with wife Beth Henley was extensively re-written by the director).

The Blu ray release of the year? Could be. Here’s the official rundown of extras from Criterion’s site.

Real Life (1986), a short documentary by Pamela Yates and Newton Thomas Sigel made on the set of the film

No Time to Look Back, a new homage to Virgil, Texas, the fictional town where True Stories is set

New documentary about designer Tibor Kalman and his influence on Byrne and work on the film, featuring Byrne and artist Maira Kalman, Tibor’s widow

PLUS: Essays by critic Rebecca Bengal and journalist and author Joe Nick Patoski, along with, for the Blu-ray edition, an essay by Byrne; a 1986 piece by actor Spalding Gray on the film’s production; and a selection of production photography, along with Byrne’s tabloid clippings and writing about the film’s visual motifs